Today for lunch, I decided to visit one of the few ground-level restaurants in the Plaza. I had seen it before, and I was interested because it was a very pretty looking restaurant. 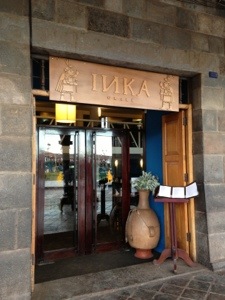 I went in and was seated in the corner. Unfortunately, it was right under the music speaker, so it was a bit louder than I might have hoped. The table was set up with one chair one booth seat. The booth seat was more like a couch than a booth. It was soft and squishy without the big straight back that many booths have.

The interior design was interesting. It was very blue, and there was a low, over-hanging ceiling over the section I was in. It is difficult to see in the picture, but there is a giant (like 2-3 feet tall) blob of differently colored candle wax. It seems like they light new ones on top and let the wax drip down. This kind of stuck out like it didn’t belong with the rest of the decor, but I thought it was interesting. It was on a table with a set up showing different ingredients being prepared, like grains being ground in a mortar and pestle.

While I waited for my food, they brought out a baskets of chips. There were potato chips and some sort of orange chip. The orange chips weren’t sweet like sweet potatoes, so I wonder if they were some other sort of potato that we don’t have in the US. The chips came with a mint dipping sauce. It was a sweet sort of mint, not spicy like you might find in an Indian restaurant. It was an odd sounding combination, but it was very good! 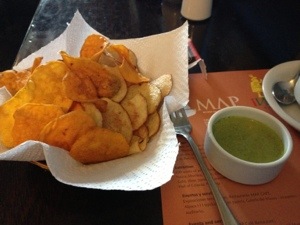 For my meal, I ordered a vegetarian risotto. I had asked for a suggestion off of the menu, but afterwards I decided that I wanted something with vegetables in it. This may not have been the choice if I was trying to be healthy, or frugal, but it was very good. It had a rich, cheesy taste and lots of vegetables. There were mushrooms and asparagus. There were also bits of a red vegetable and bits of a white one, but I don’t know what they were. The asparagus really was wonderful. Peru is supposed to have good asparagus, but I heard that it is usually really expensive here because they export it. I definitely want to have some asparagus in the future, maybe when I can taste more of the vegetable and less of the risotto (not that the risotto wasn’t worth having again!). 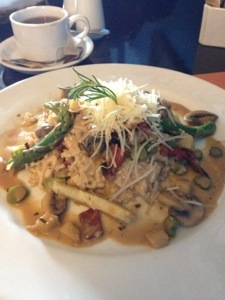 Now, after I finished the entire, giant plate of rich risotto, I decided to pig out a little more and get dessert. I got a poached pear that came with cinnamon ice cream. The pear was warm and sweet, and it went perfectly with the small scoop of very strongly flavored cinnamon ice cream. It was very good, and I wouldn’t mind trying to make something similar back home. I have been wanting to try making risotto for awhile, so maybe I can use this idea for dessert! 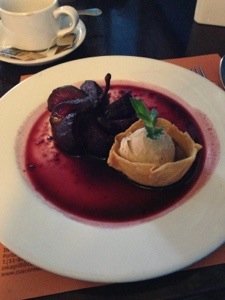