Since I have a long weekend, I’m just sitting around procrastinating on my homework. So, that means that I decided to have a blog post about all of the random snacks that I have come across in an attempt to have more than two meals per day! This has been a bit difficult here. I tried going to a grocery story to see what was available to take to school for lunch. Unfortunately, most of what they have is stuff that requires cooking. So, I got into the unfortunate habit of eating Snickers for lunch.

At first, I had been stopping by a bakery/cafe to pick up a chocolate croissant (I know, soo much better than a Snickers!) on the way to school. La Valeriana Bake Shop was an interesting seeming place. There were small chandeliers and it had a bit of a French feel to it. Unfortunately, I found that I didn’t like the service. Ordering was difficult, especially if there were multiple people there. I never really figured out if you were supposed to place your order to a waiter, over the counter, or at the cash register. Also, while waiting for my order to be processed there was really no place to wait that was out of the way. Maybe this just wasn’t supposed to be a take-away sort of place, but either way it left me feeling bad about buying food there. That is not a good place to eat at, I think.

In addition to the service, I found that I didn’t really like their food. The chocolate croissant was good, but the rest of it was just edible. This mushroom and onion empanada was kind of good tasting, but it had my stomach churning afterwards. That was the end of me trying a small after school snack before dinner! 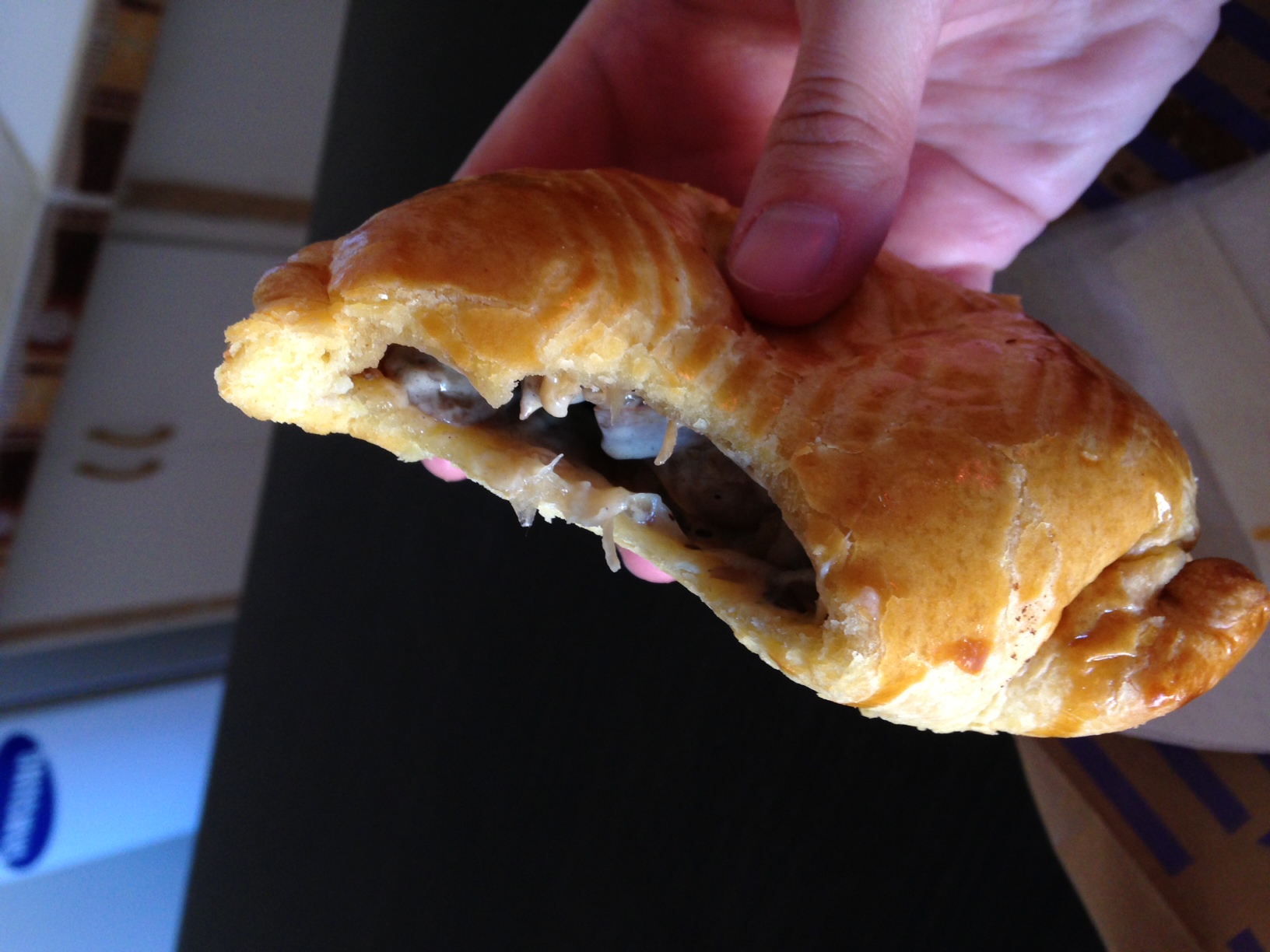 This was a french profiterole. It looked so pretty that I wanted to try it, but it was pretty bland tasting. 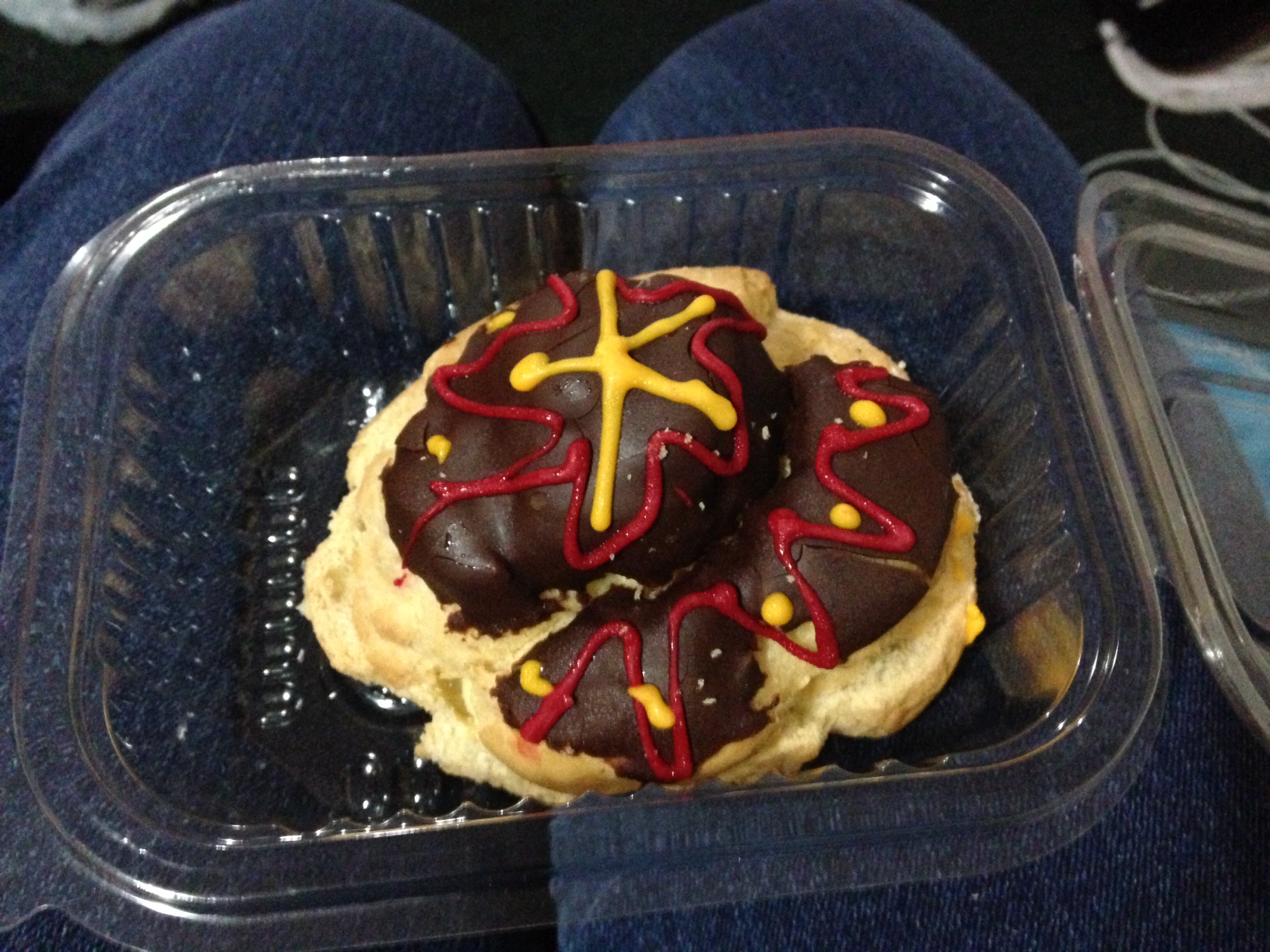 This was the last thing I tried there. It was a toffee covered brownie. Unfortunately, the brownie was pretty crunchy on the edges and the toffee didn’t really add much to it. Hardly any flavor. 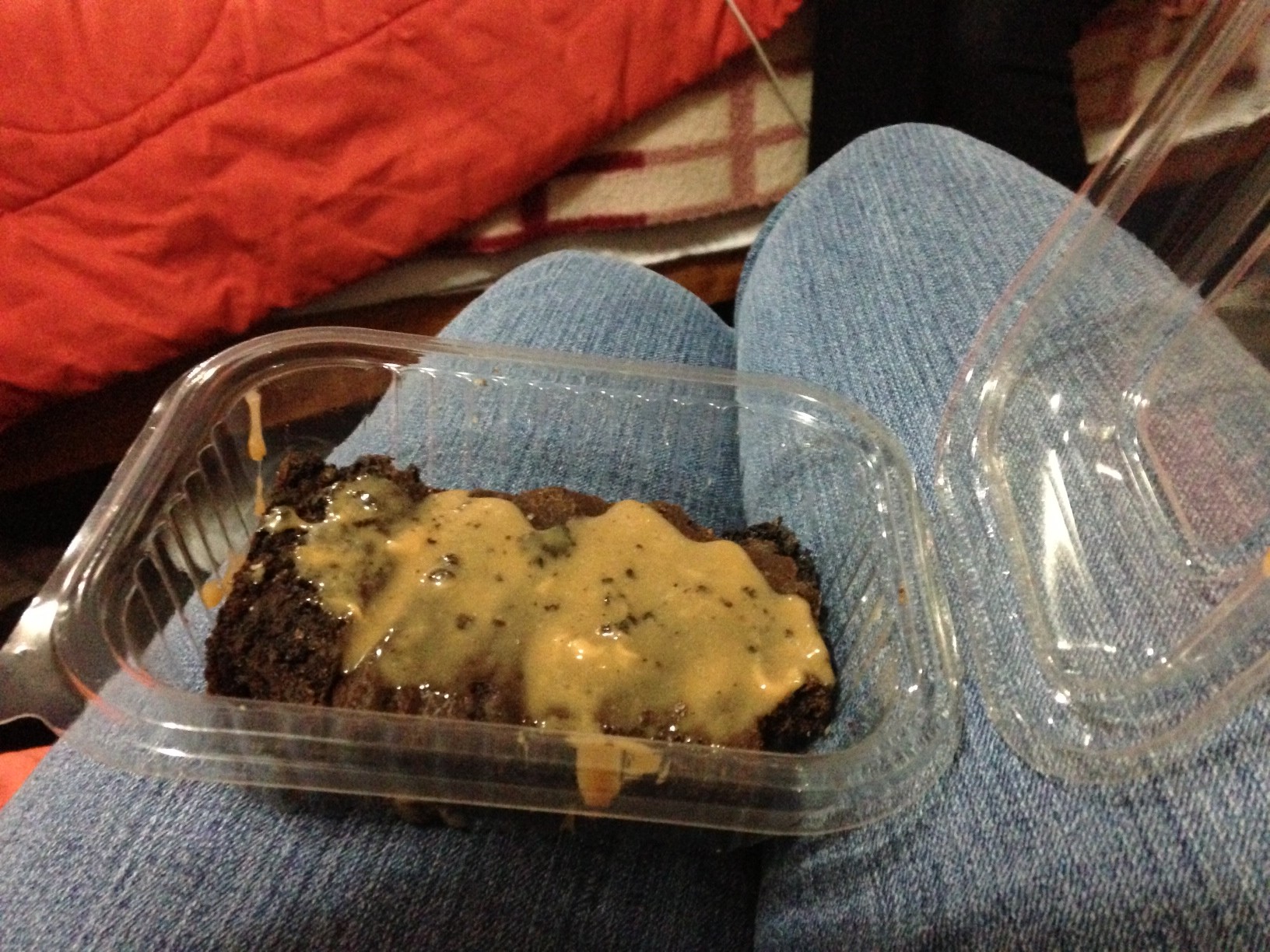 So, on to the Snickers!

Fortunately, I have recently found a little coffee shop that has baked goods called Don Esteban & Don Pancho. Not only are they really friendly and helpful there, but I think that their options are better and tastier than the ones I tried in La Valeriana Bake Shop. To be fair, I haven’t tried anything off of either menu, just the baked goods. 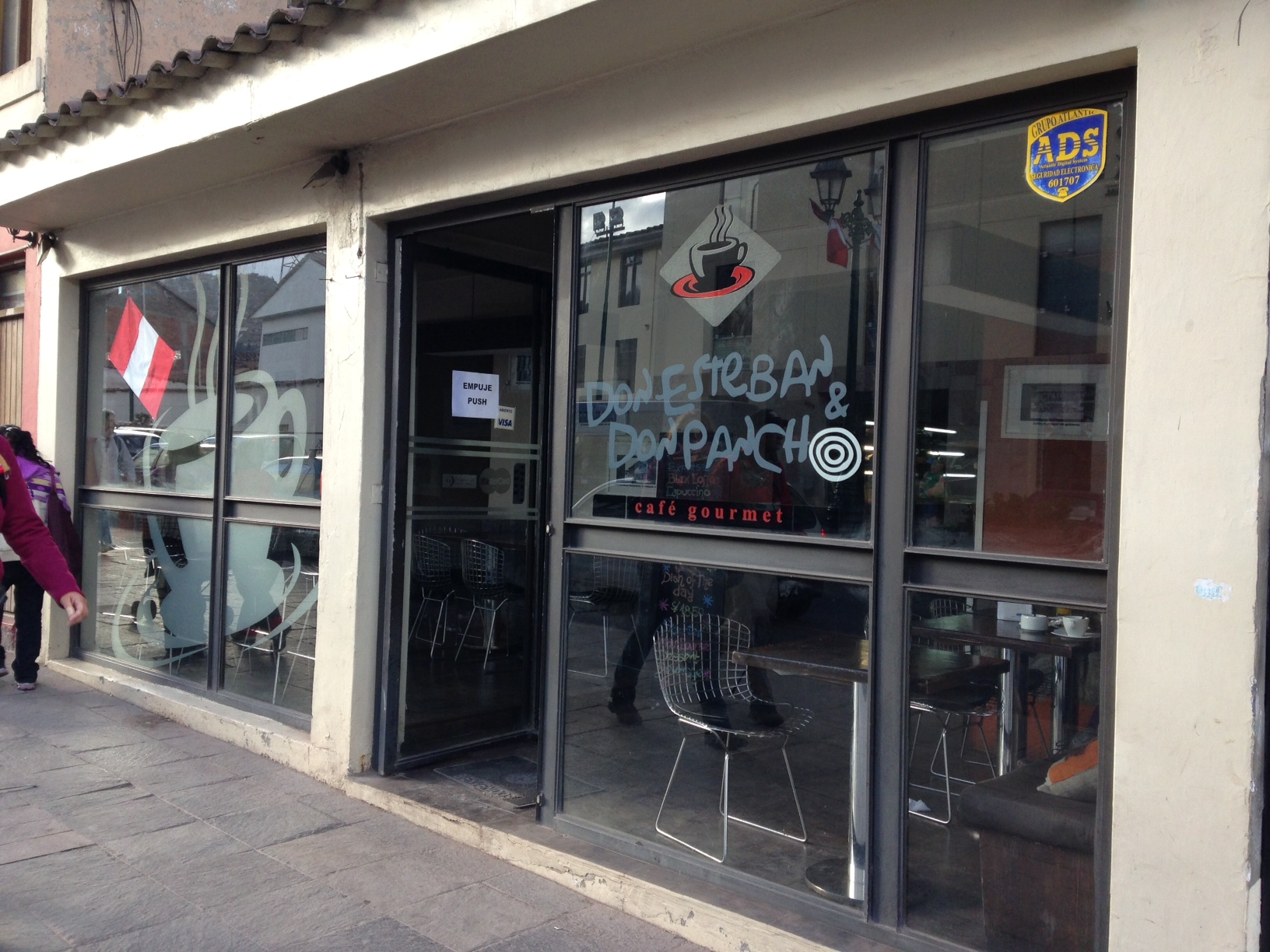 Here is an example of a chocolate croissant. I think that it is from the new place. They are pretty similar in the two places. A giant, puffed up croissant with a layer of rich chocolate in the middle. It doesn’t look like much chocolate, but the flavor is rich enough that it is enough for the pastry. You can get it heated up, but I like mine cold. The chocolate has a slightly crunchy texture from being heated up in the oven when it was baked. 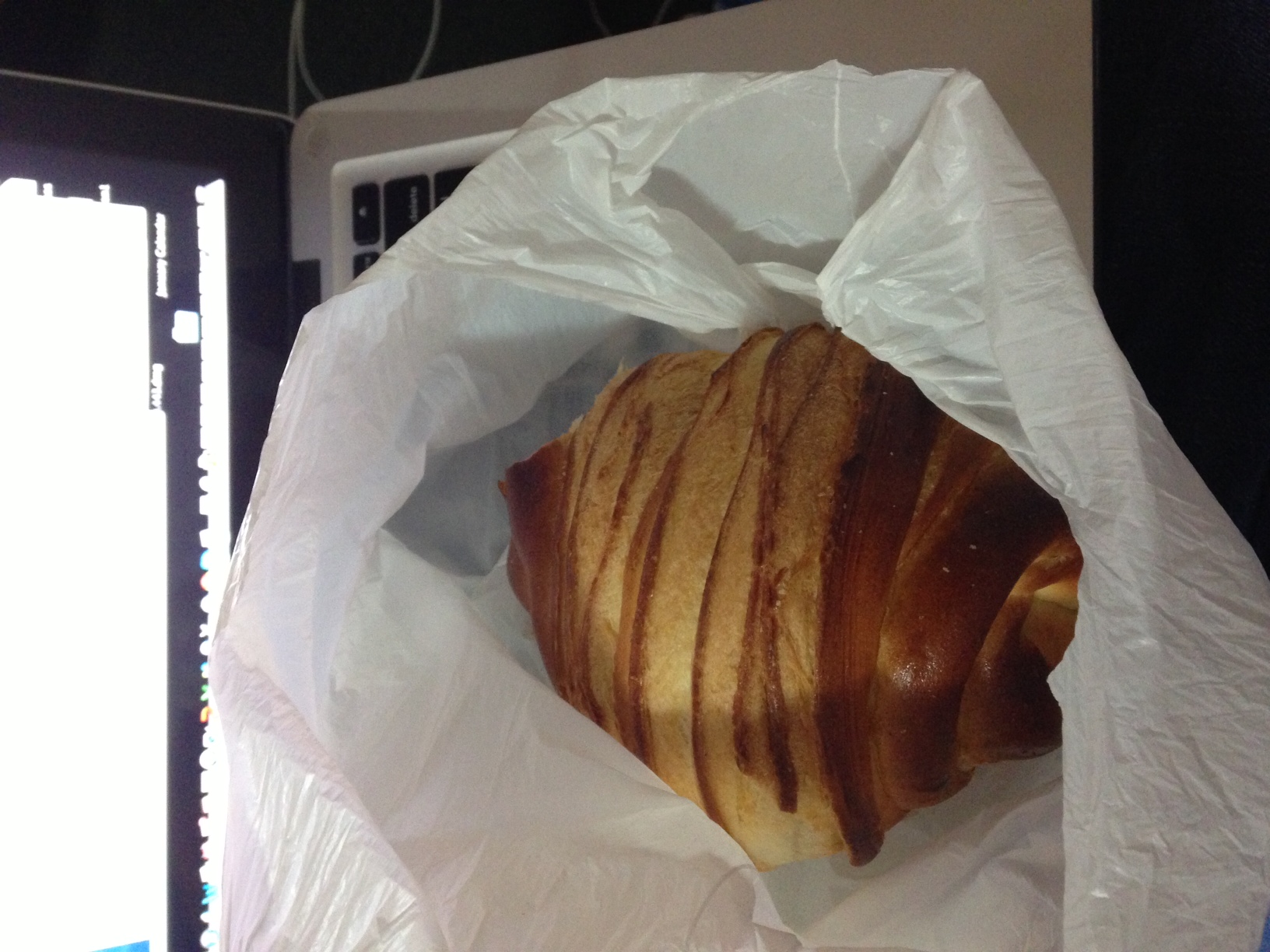 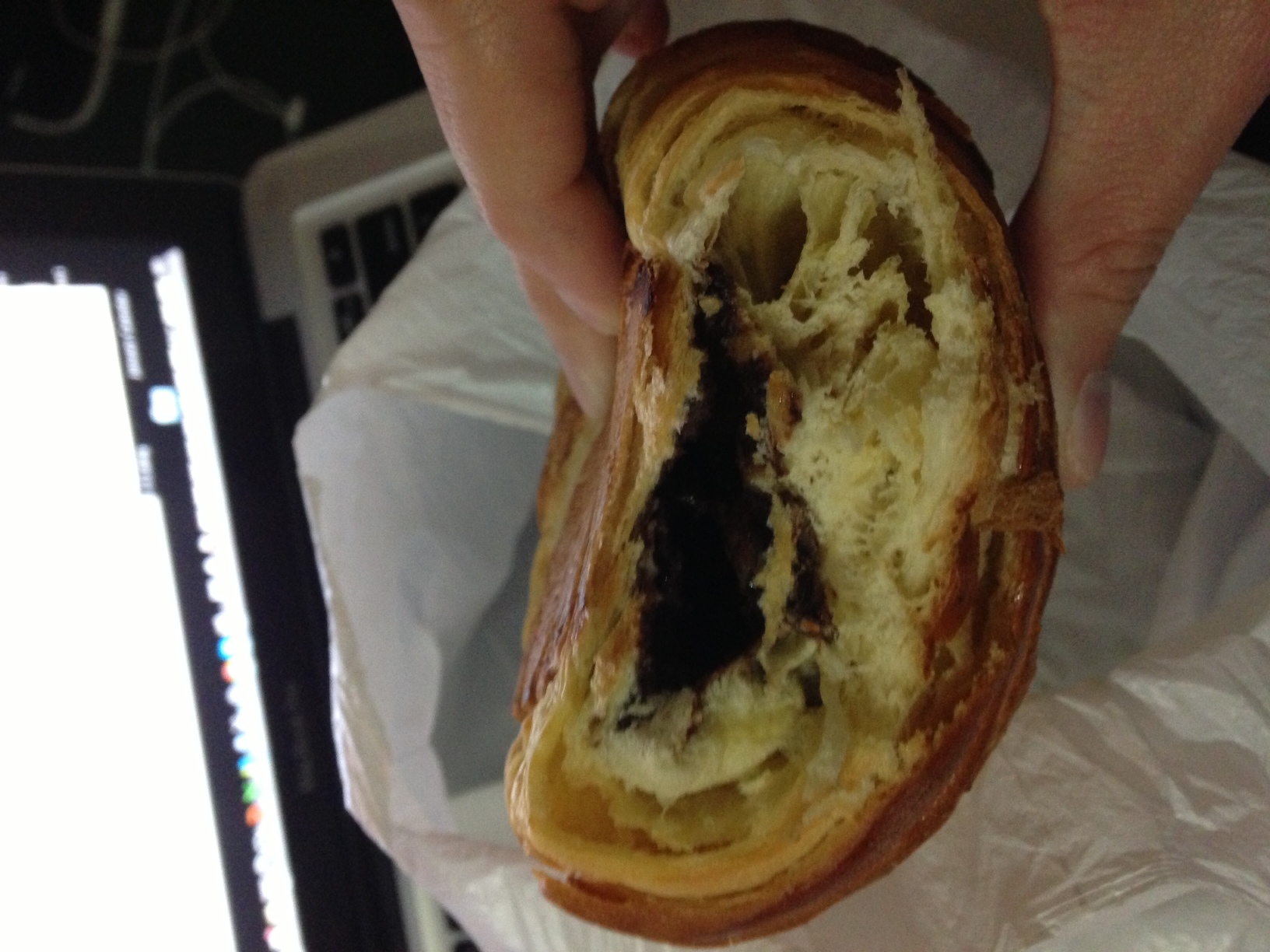 One discovery that I have made at this new place is their apple pastry. The pastry is denser and sweeter than the chocolate croissant, and it pairs perfectly with the shredded apple in the middle. 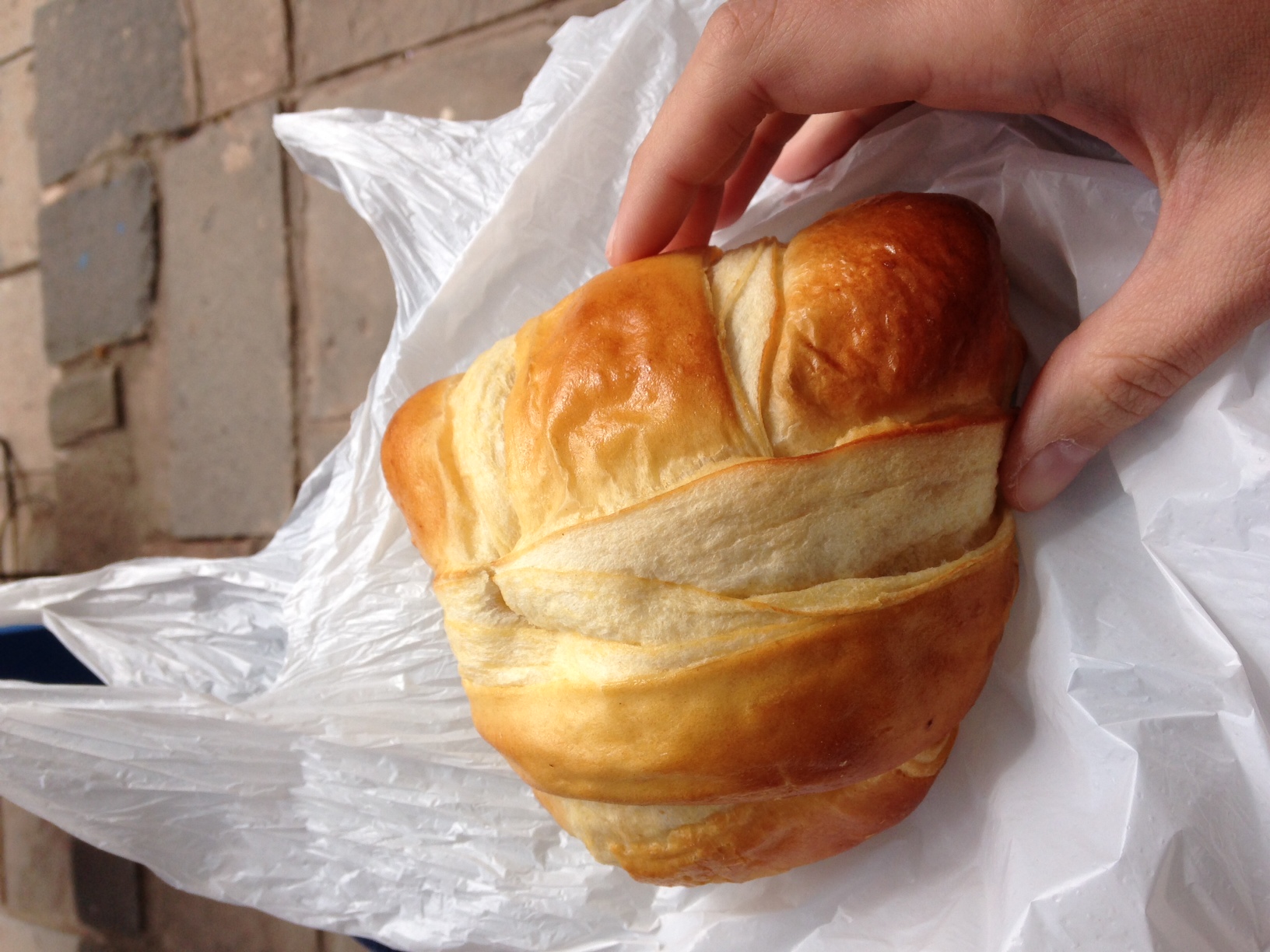 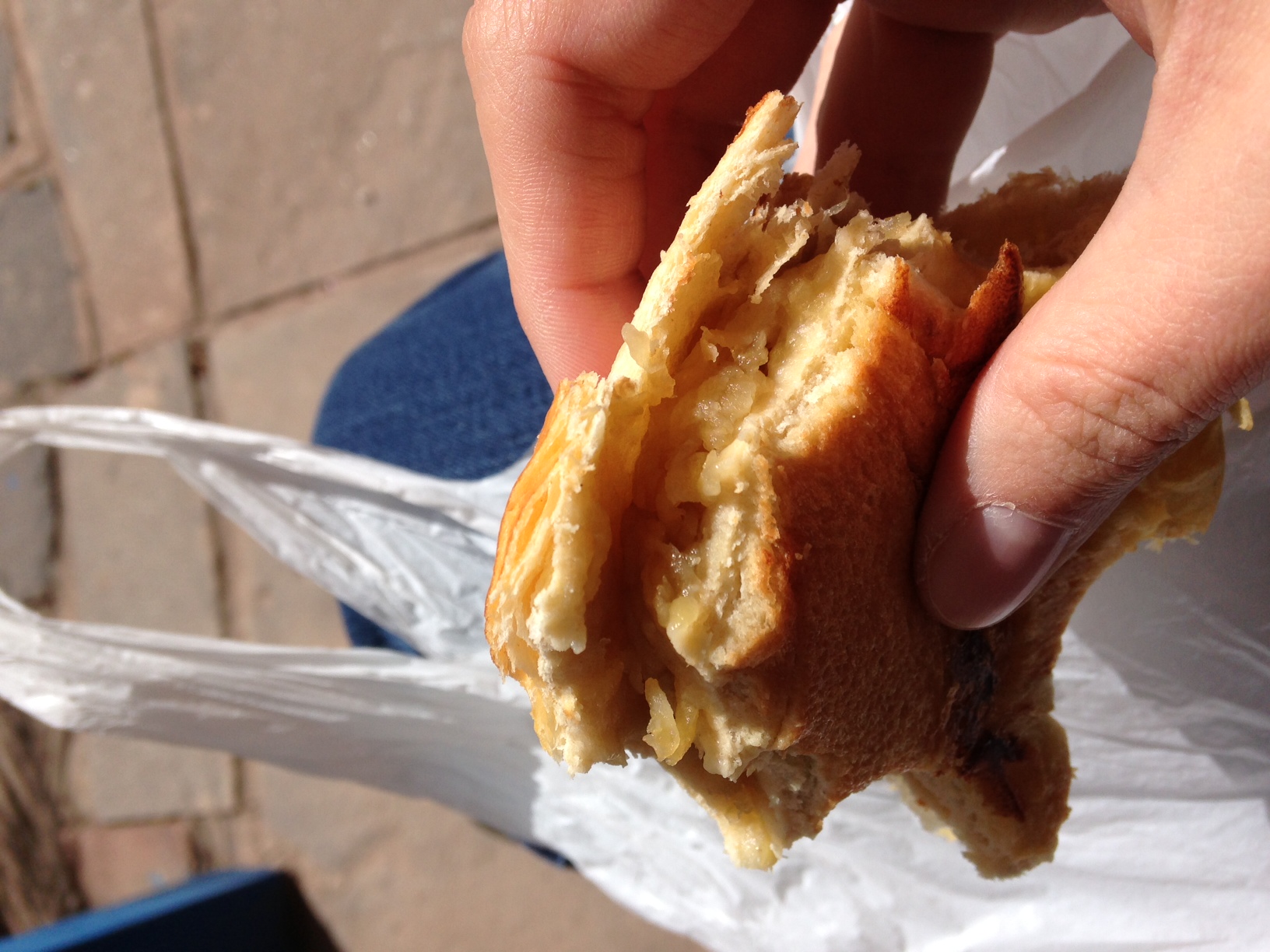 They also have this lovely bread here. I don’t know what it is called, but it is that type of bread that is nice and crusty on the outside and fluffy inside. This would be perfect heated up with some butter! I think I have access to a microwave. Now I just need to find some butter… 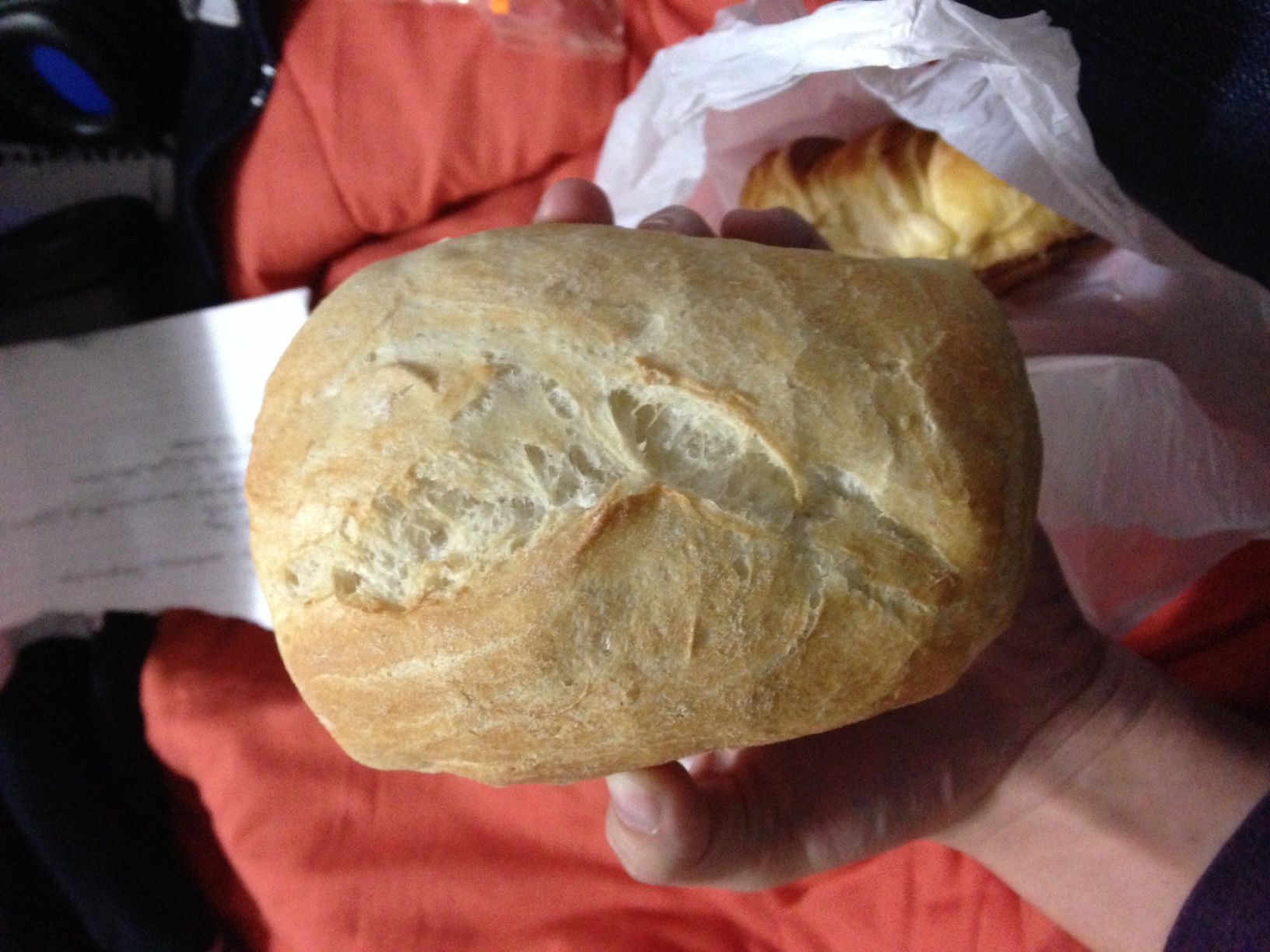 This new place also has a bit of a confusing way of ordering if you are not used to it, but this way of ordering doesn’t seem to change and the people who work there are always willing to help. The part of the store with pastries and baked goods is a tall shelf with baskets of the options. They aren’t labeled, but you can always ask what is what. When you decide what you want you take a little basket and use a set of tongs to take your selection to the counter. There they bag it (after offering to microwave it) and send you further down to the cash register. 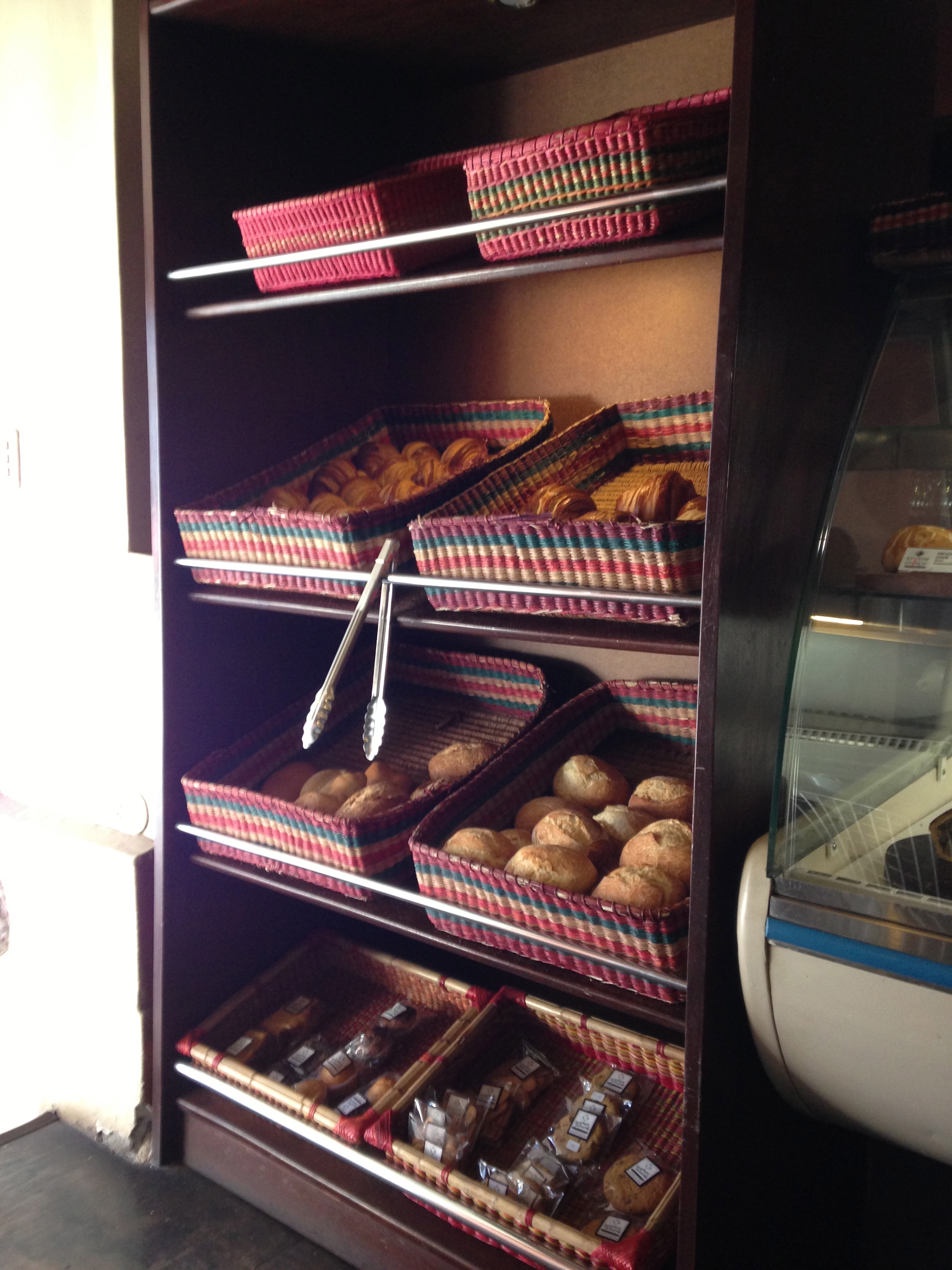 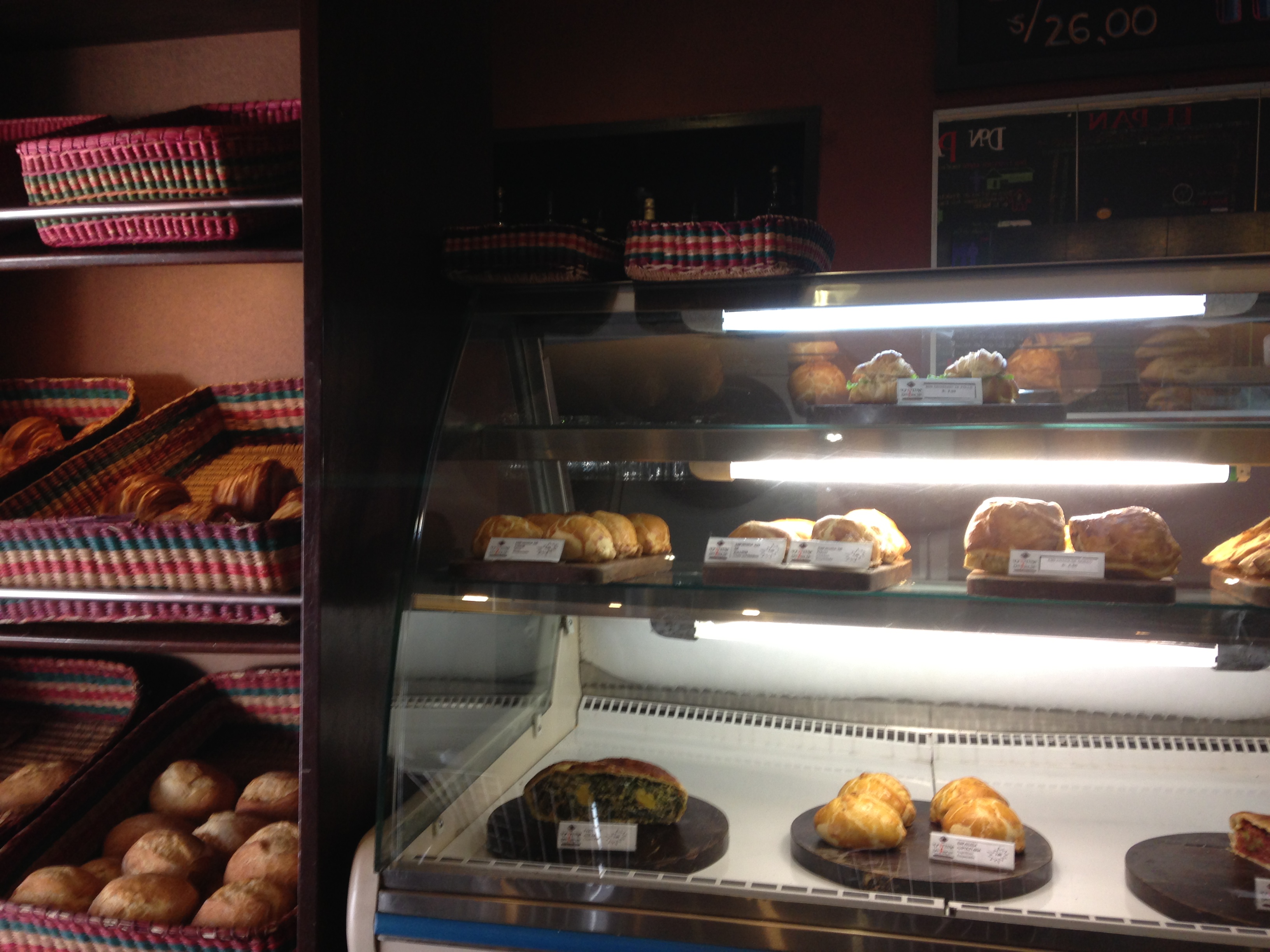 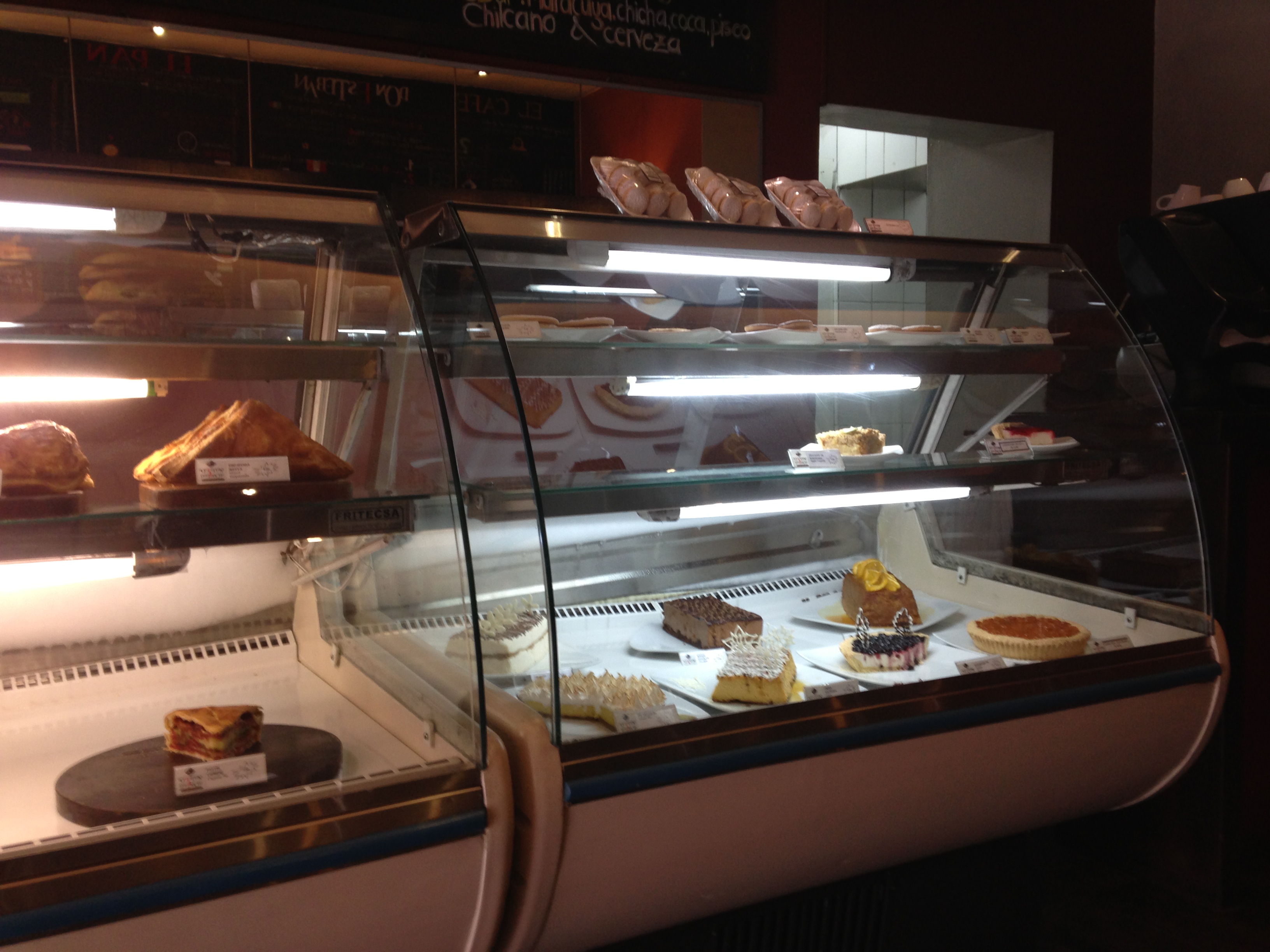 I have also tried both the apple crumble and the lemon pie. They were both really good. The apple was a bit more minced than in the US. I have recently heard that you can get it with ice cream if you eat it in the restaurant! Maybe I should try that next. The lemon pie was really good. It was a little sweet and a little tart with a gooey meringue on top. 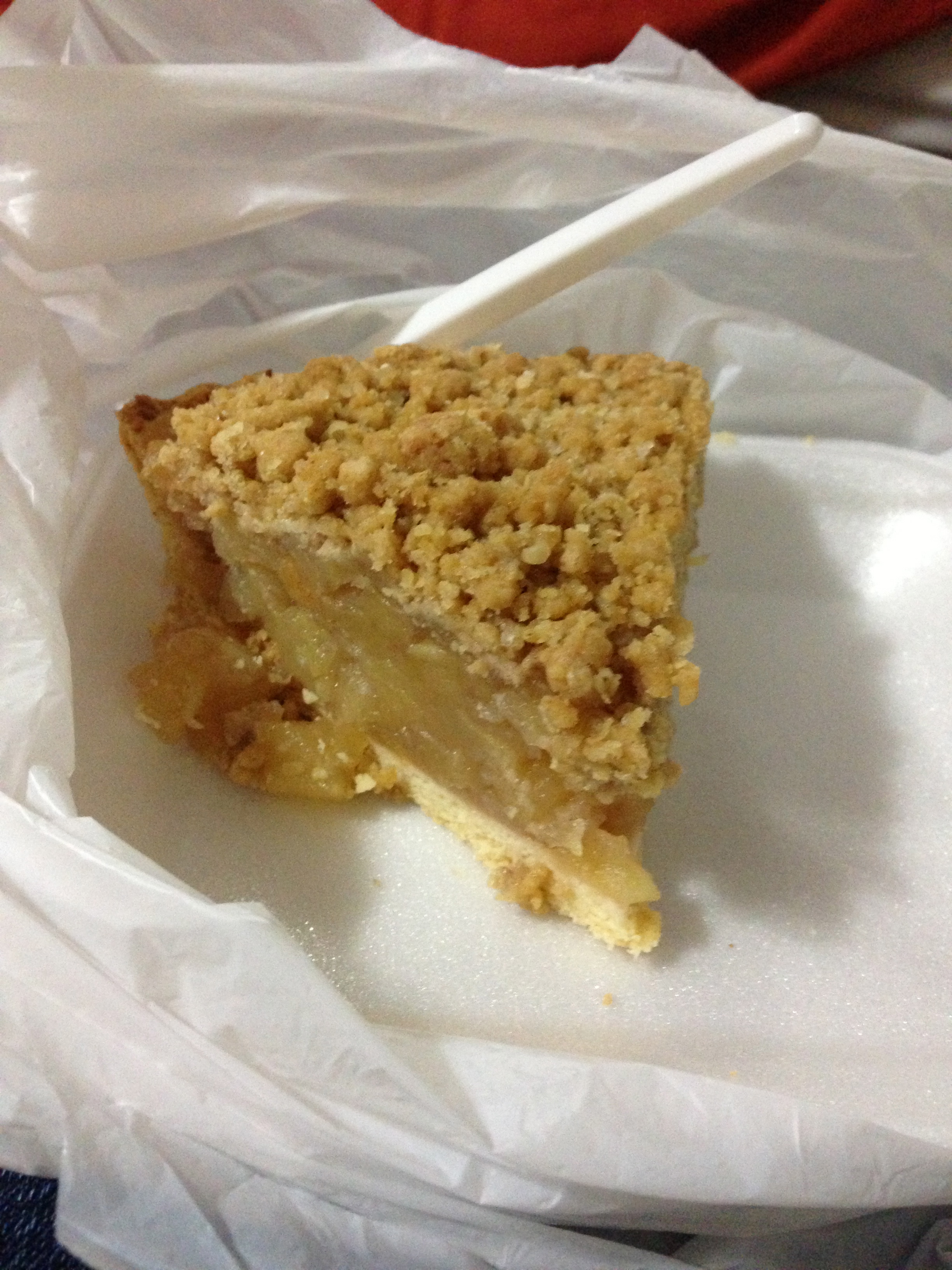 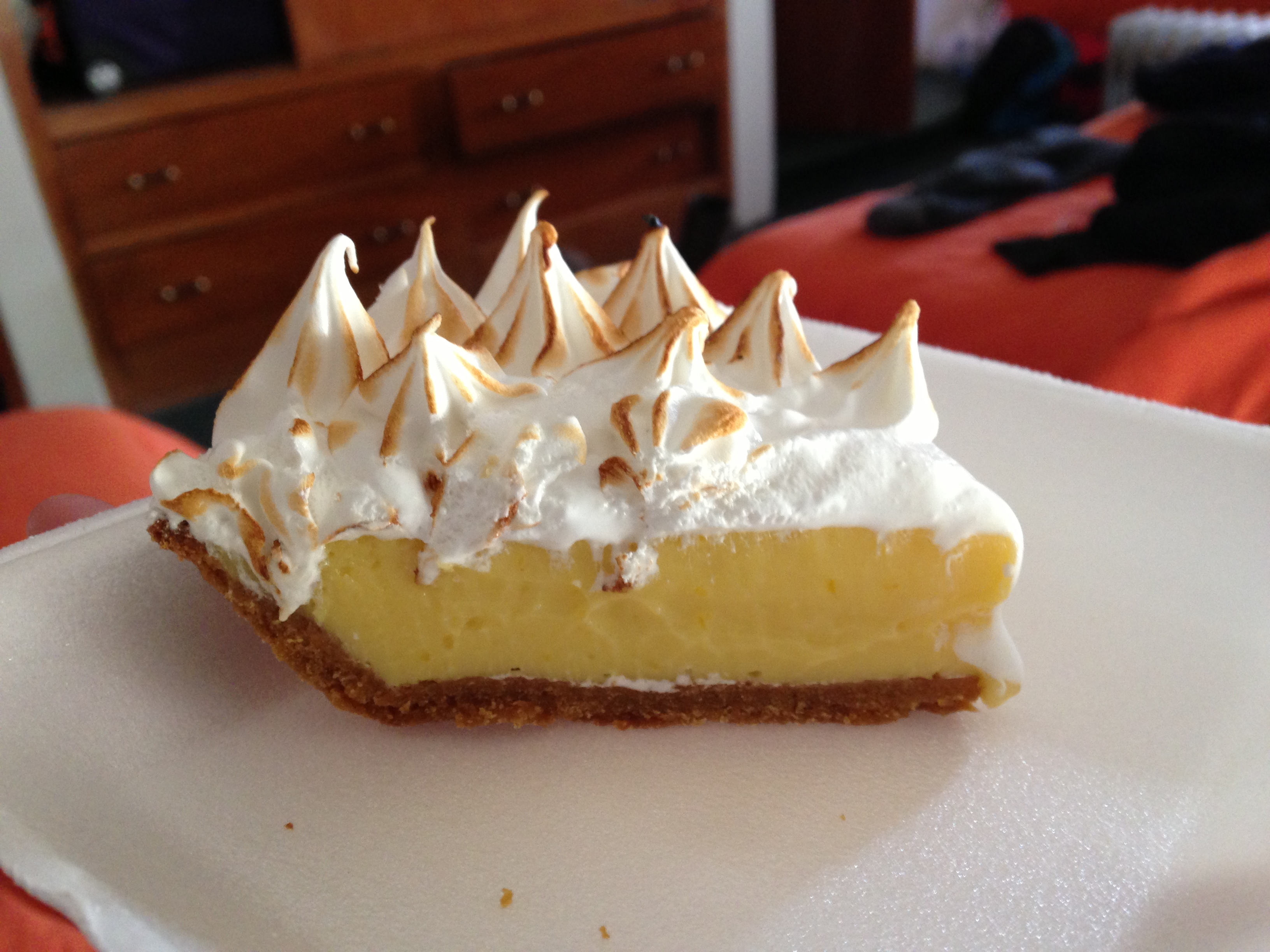 Recently, I decided to try actually eating something off of the menu! I ordered a caprese spaghetti dish and passion fruit juice. The juice was incredibly awesome. The pasta was pretty good. I don’t eat pasta often enough to know just how filling pasta can be, so I think I overate. In addition, there weren’t many tomatoes and the cheese was in odd chunks. Still, the overall flavor was good. I just needed to eat less! My decision for both of these items was based off of the suggestion of a girl from Canada who was sitting next to me. She moved over to my table, and we had a really interesting conversation. Apparently American food really is bad. The term she used to describe it from when she had visited the US was “junky” and I found myself fully agreeing. In addition, it was a bit of a foreign concept to her that we only eat pre-packaged grocery store bread. Where she is from it is more common to buy from bakeries with fresh bread. 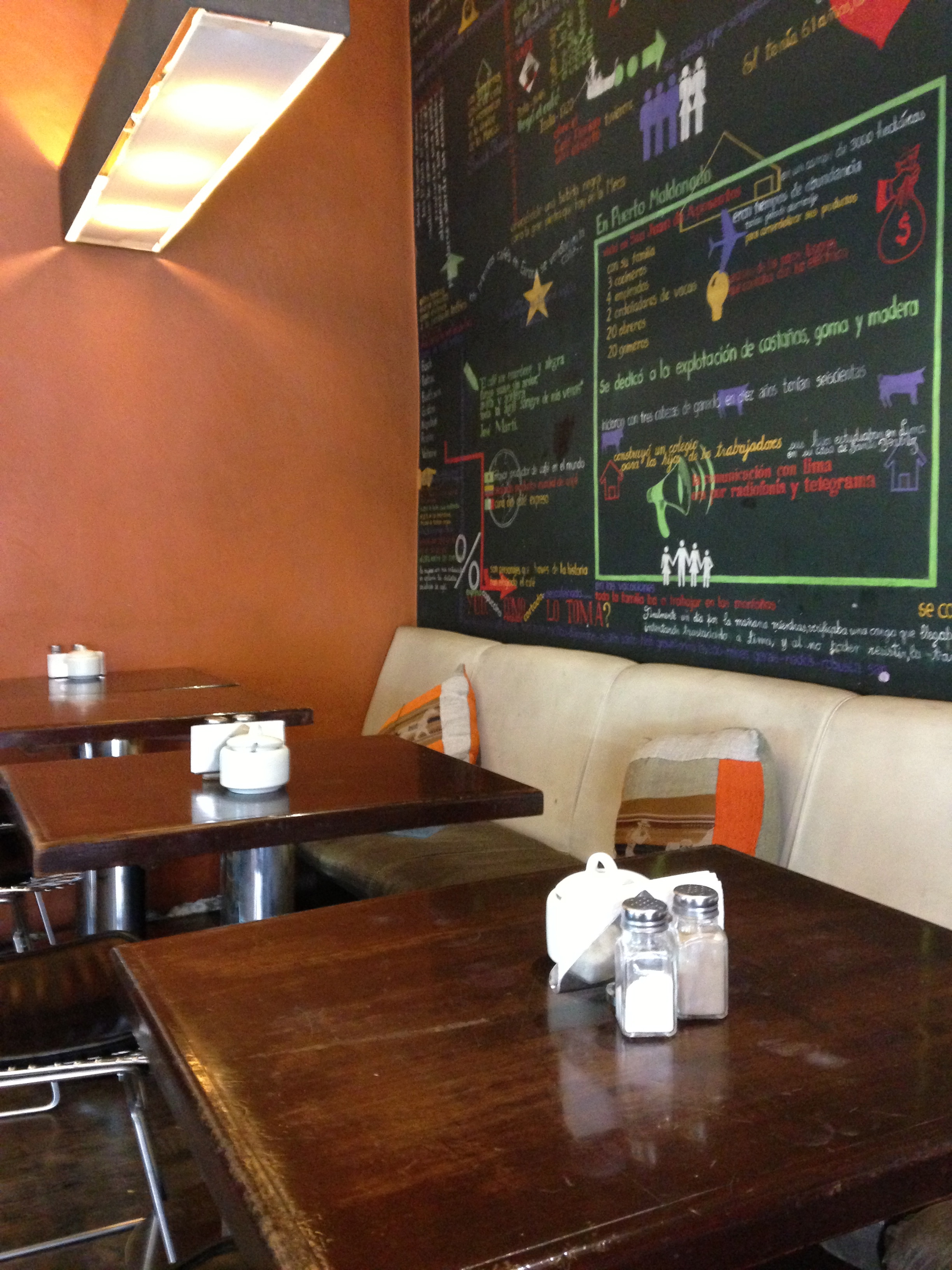 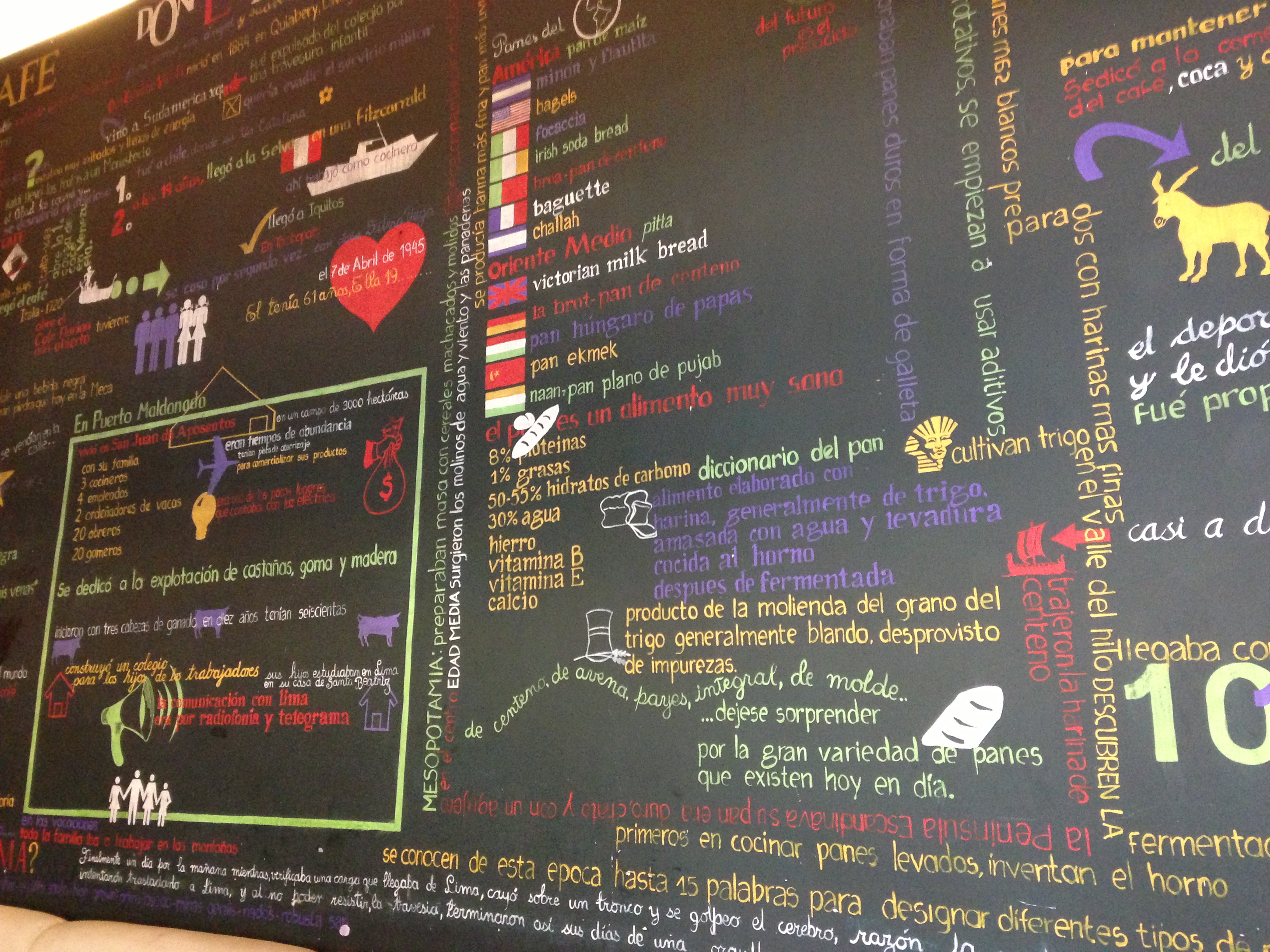 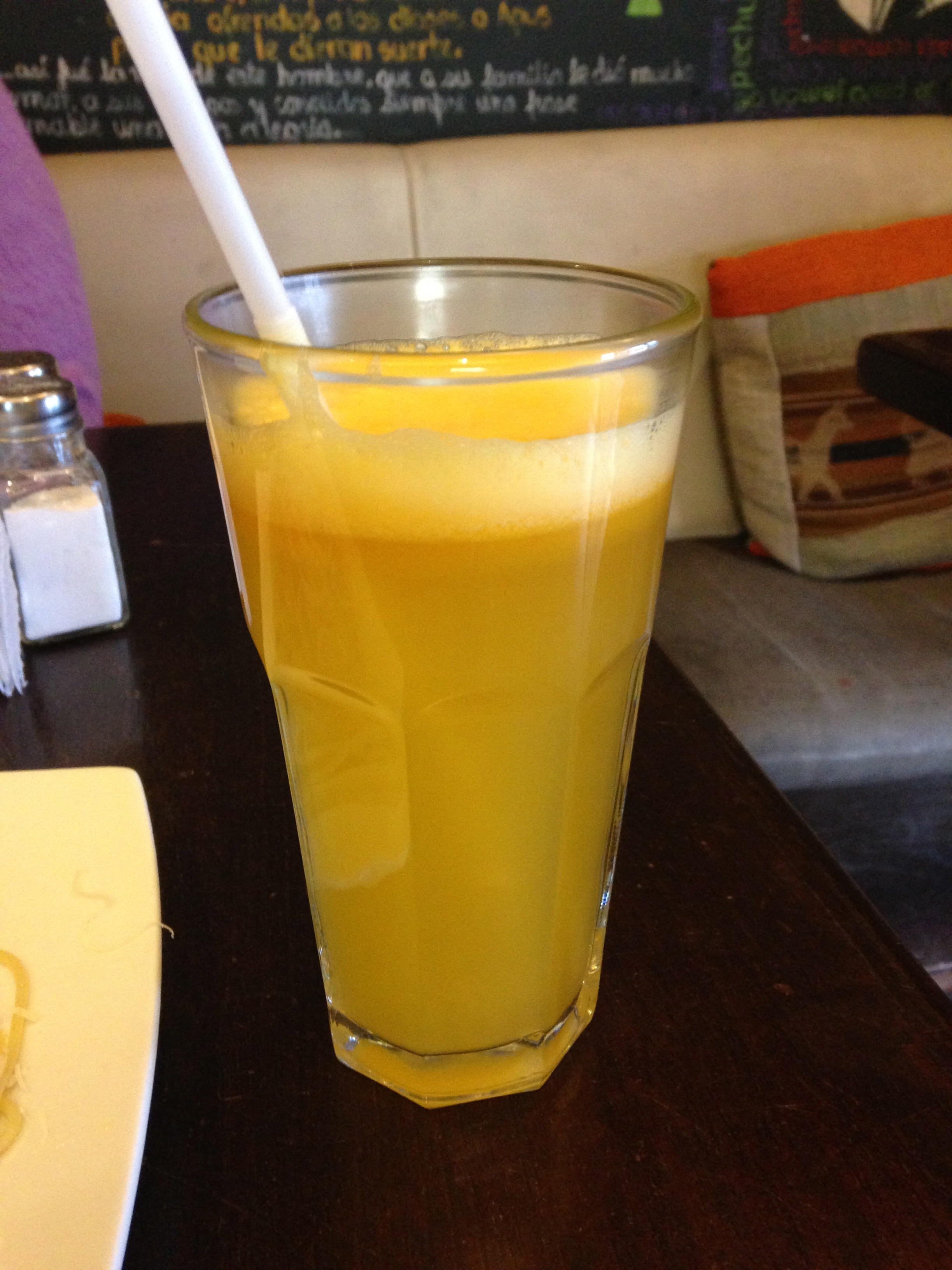 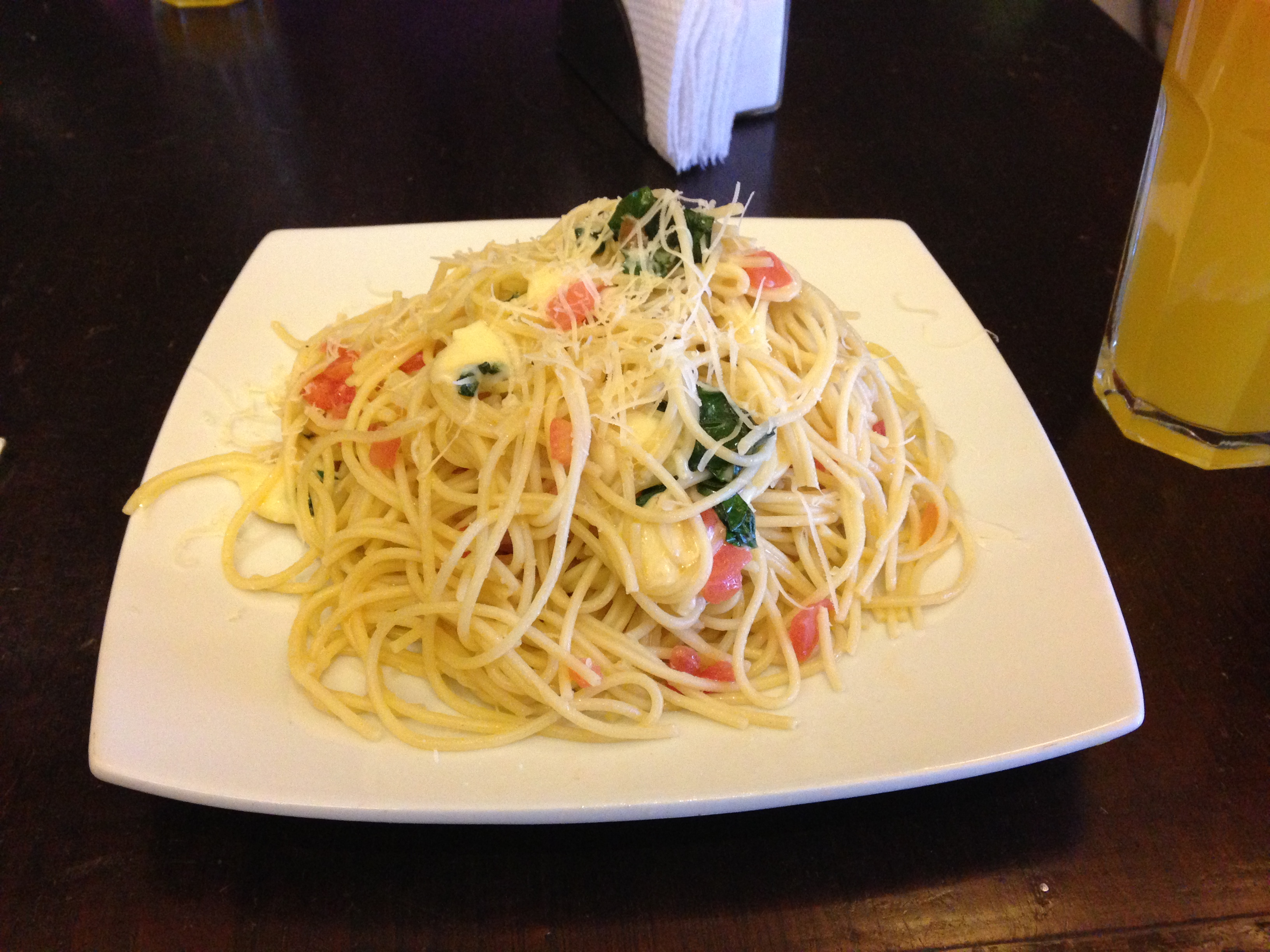 I really like this new place, and I look forward to trying new things. Just last night I tried a bread roll that had a nice crusty outside and a soft inside. It would have been perfect heated up with some butter!