Today I was planning on trying Greens again. I have had about 50/50 luck with their food so far, but I was really craving their juice (maybe I should just go for juice and dessert one day – they have a chestnut pie that sounds interesting…). On the way, I stumbled across this new restaurant, Mutu. The menu had items that were less than half of some of the more expensive meals at Greens, so I decided to try the new place. Despite the way I chose the restaurant, I ended up getting a more expensive meal.

I sat down and was given a menu. Unlike most restaurants (where it is pretty difficult to get a waiter once you’ve made up your mind about what to order) the waiter here decided to wait around and verbally told me the set menu. I had a bit of trouble understanding him. I understood that trout was involved, but I wasn’t sure if that was the main course or a ceviche. I decided to go ahead and order whatever it was and hope it wasn’t ceviche (this is one of the few things I was still trying to avoid because of trying to not get sick).

While I waited for my food I had the chance to look around. This was a very interesting restaurant visually. The walls were purple and everything had a clean, sleek and modern look. There were options for couch seating or table seating with clear plastic chairs that had cushions on them. In the back of the restaurant there was an area of seating that dipped down that was below a small indoor balcony section. One unusual part of the decor was the religious element that seemed to be involved. There was a line of pictures that looked religious, although I don’t know enough about any religion to identify what any of them might have meant. 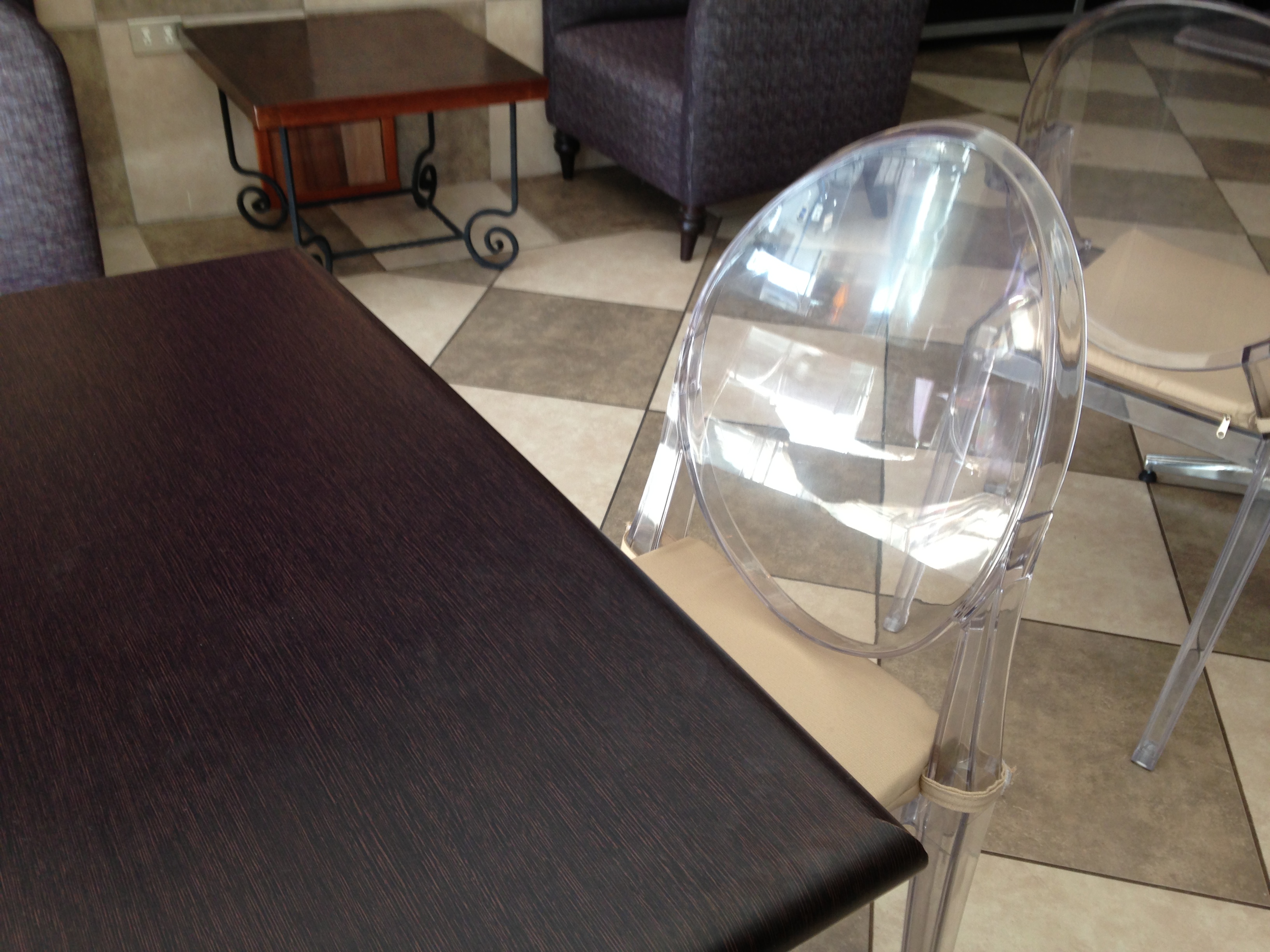 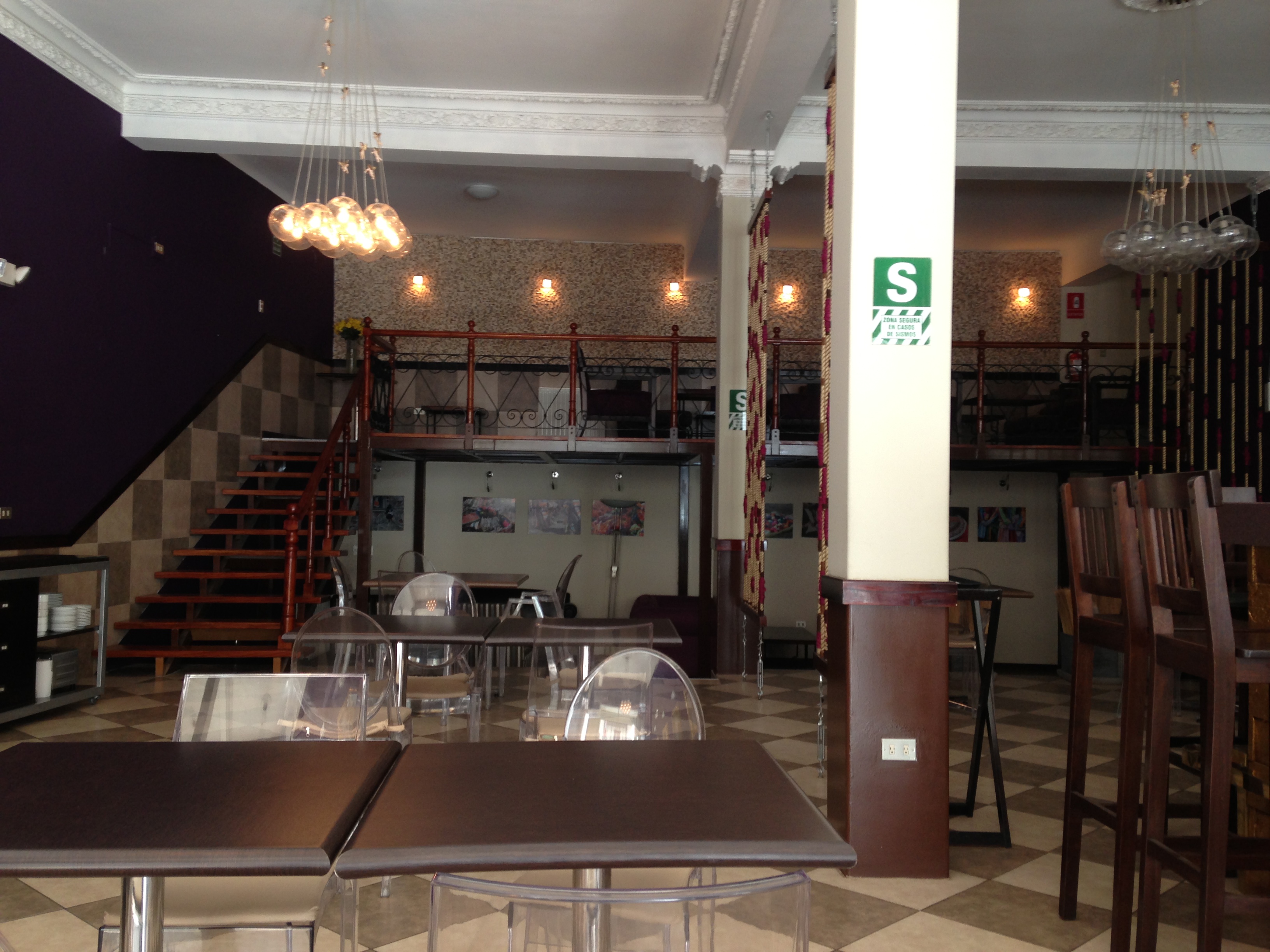 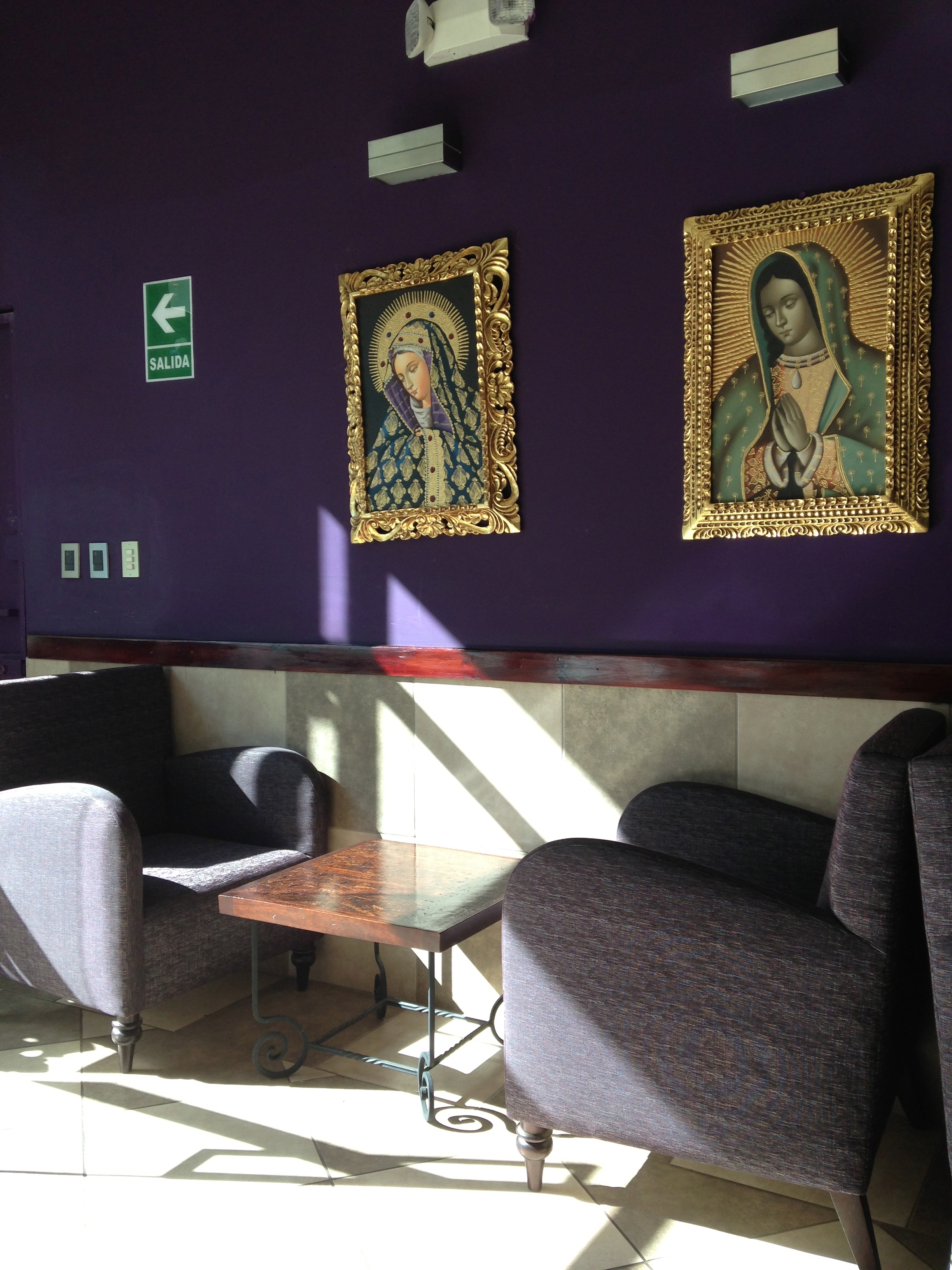 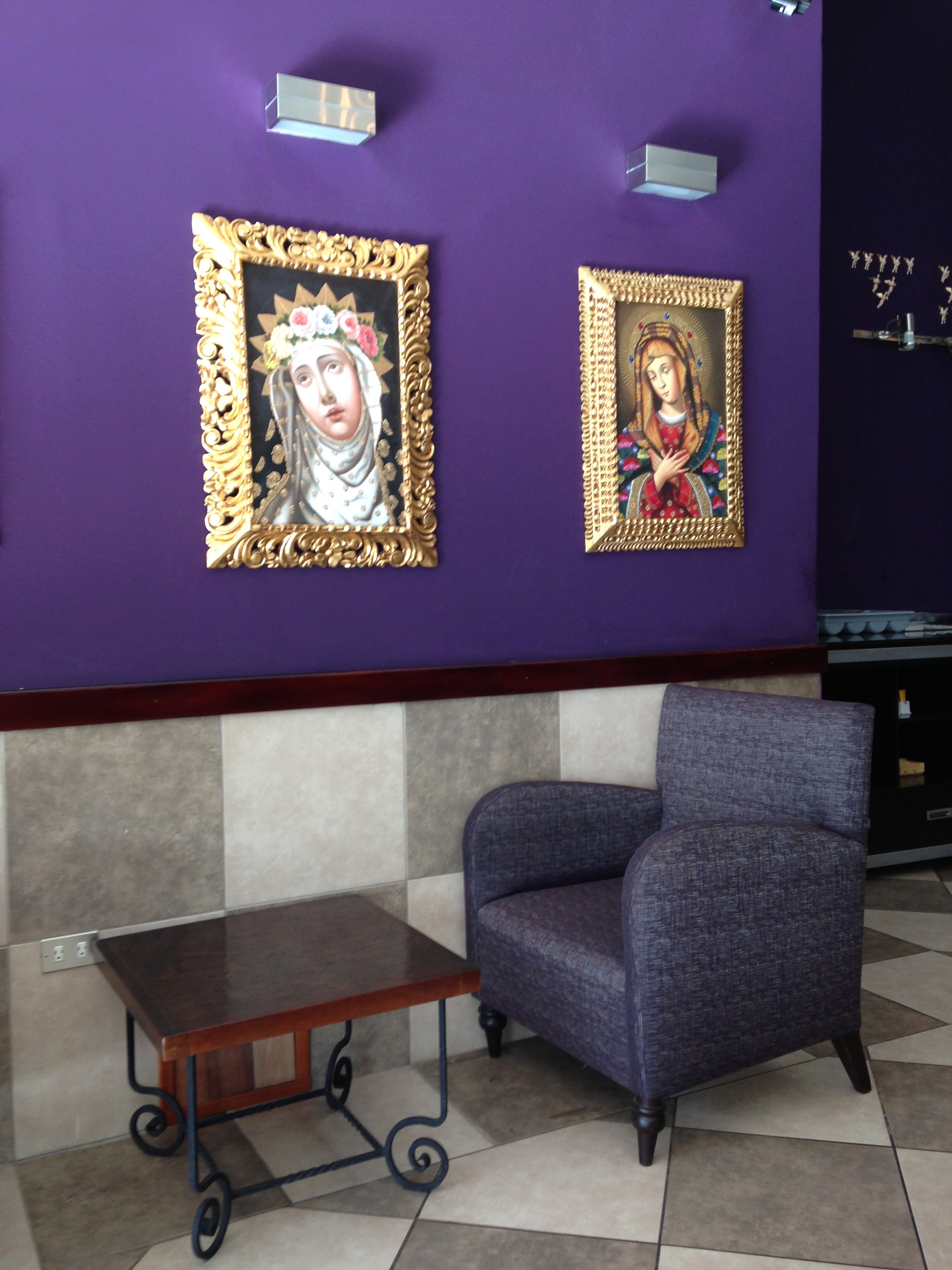 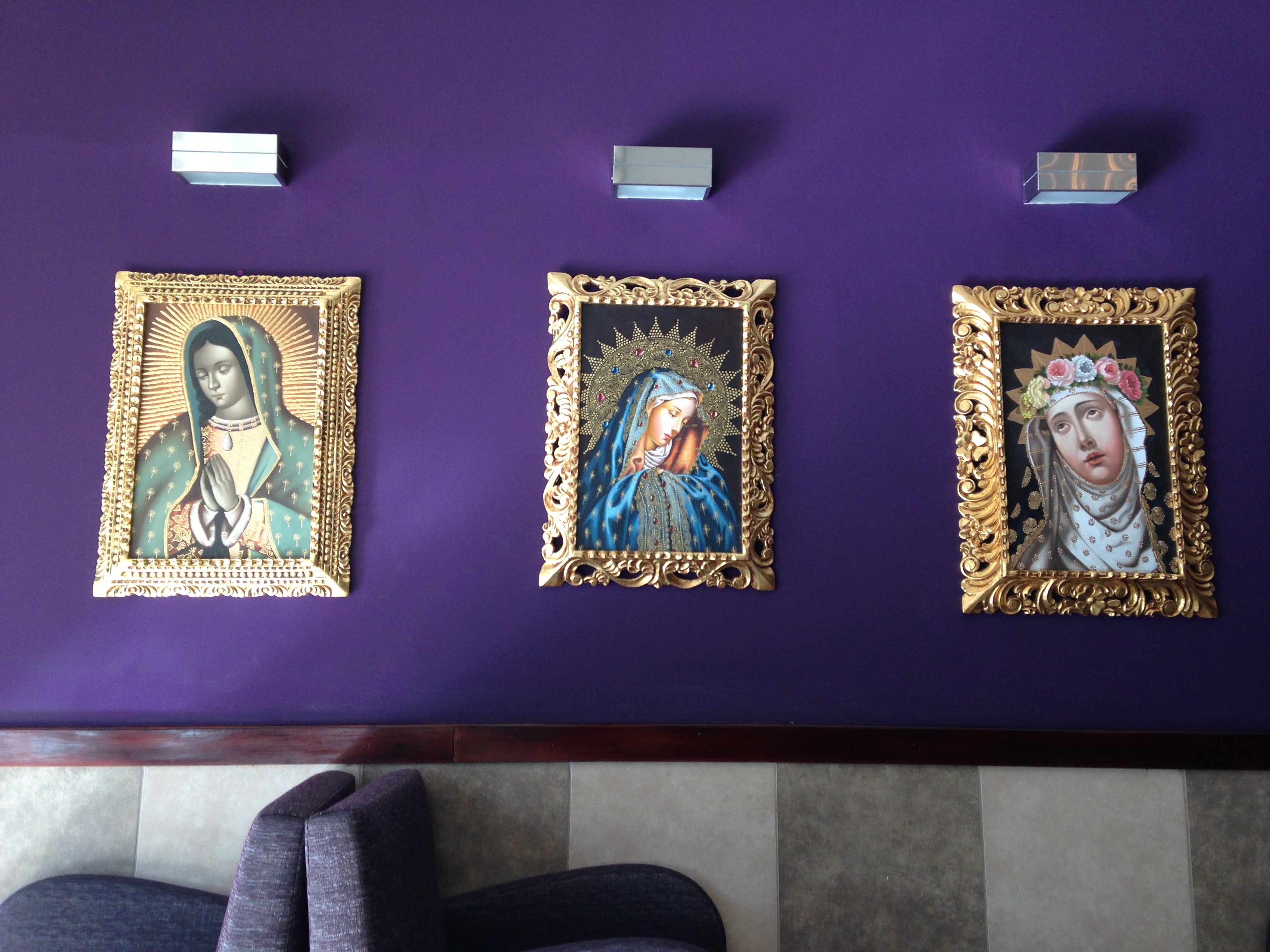 I really liked the bar design. It was made to look like it was made out of gold bricks. I also liked some of the light fixtures. There were several bunches of lights that hung from a circular fixture. The lights at the end were round bulbs that clustered together. There were little cupid-like figures attached to each light strand. 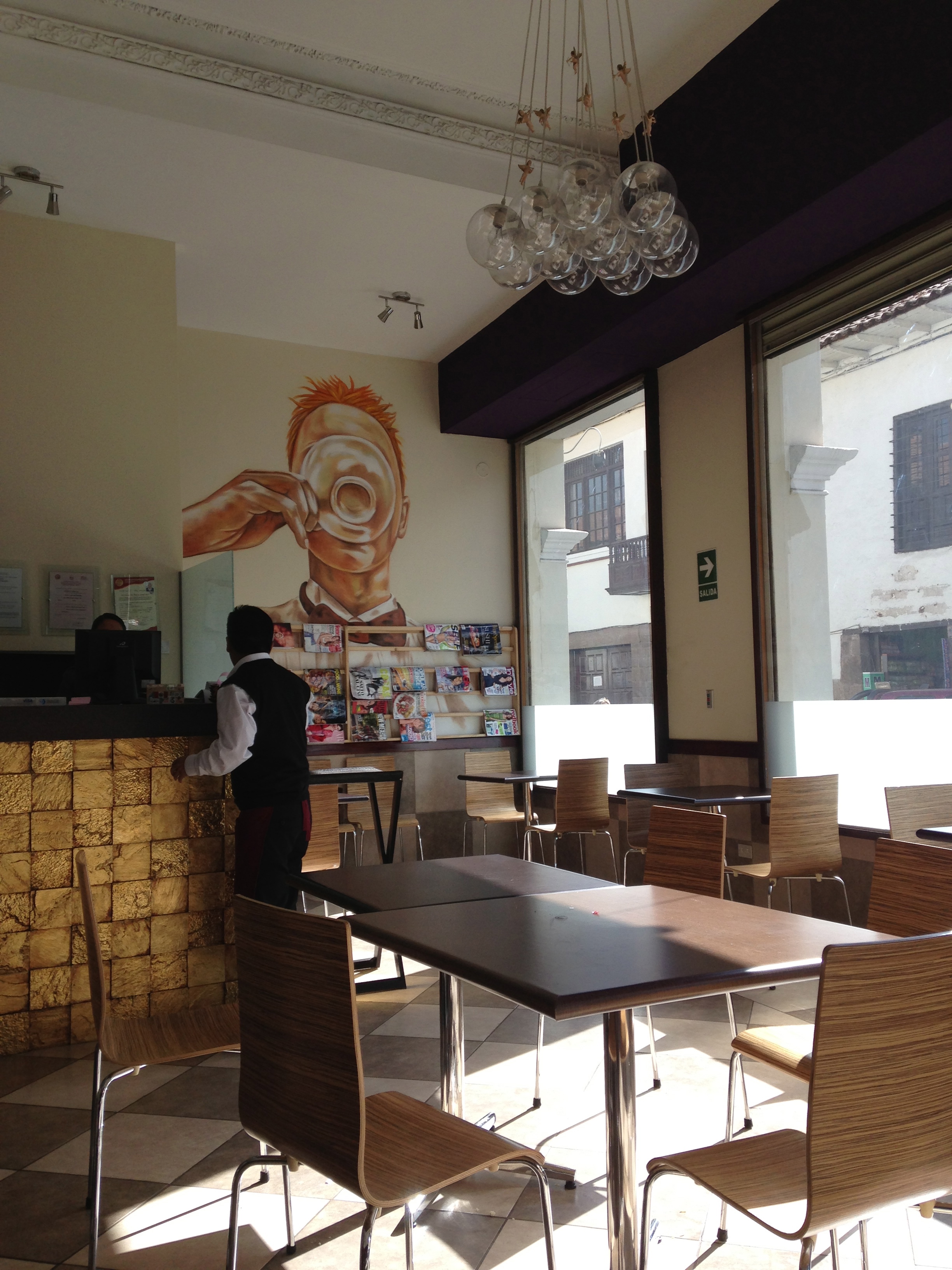 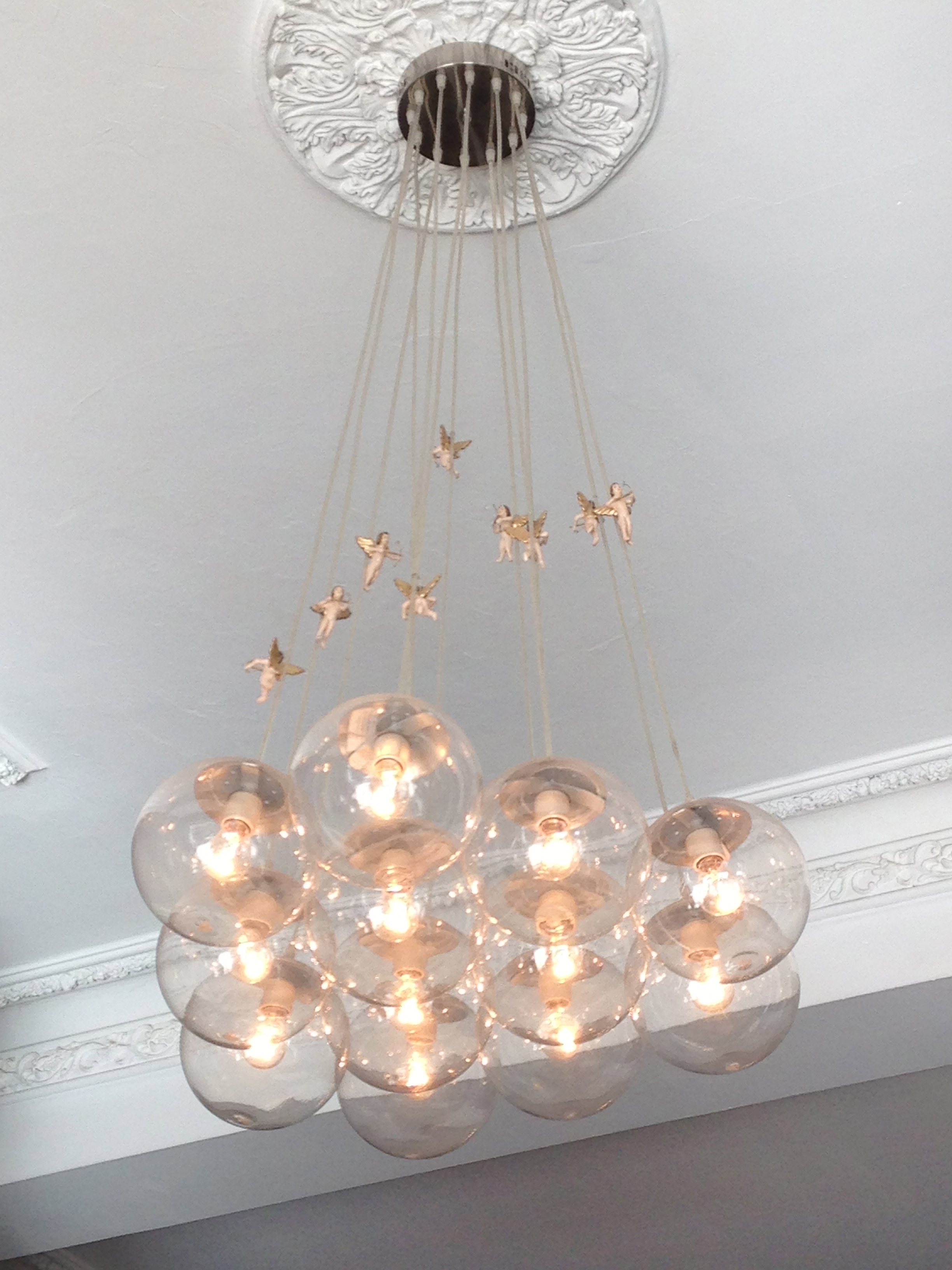 As I was looking around, a waiter brought out some bread for while I waited. I say bread because that is the easiest way to introduce what was brought out, but it wasn’t an average bread basket. The bread by itself wouldn’t have been good. It was several thin slices of some sort of baguette that was toasted to a crouton-like texture. It had some sort of butter/garlic on top. But with the bread was a little white bowl with a purple goop in it. It came with a cute wooden spoon to glop it onto the bread. I don’t know what it is, but I really wish I did know. It was mildly tangy, but pretty creamy tasting. It was really good. I tried to ask what it was, but the waiter didn’t know the english term for it and the Spanish term was too garbled sounding for me to make out. That makes me think that it is like that algarrobina ice cream flavor, where I couldn’t make out what it was because I didn’t know what it was. 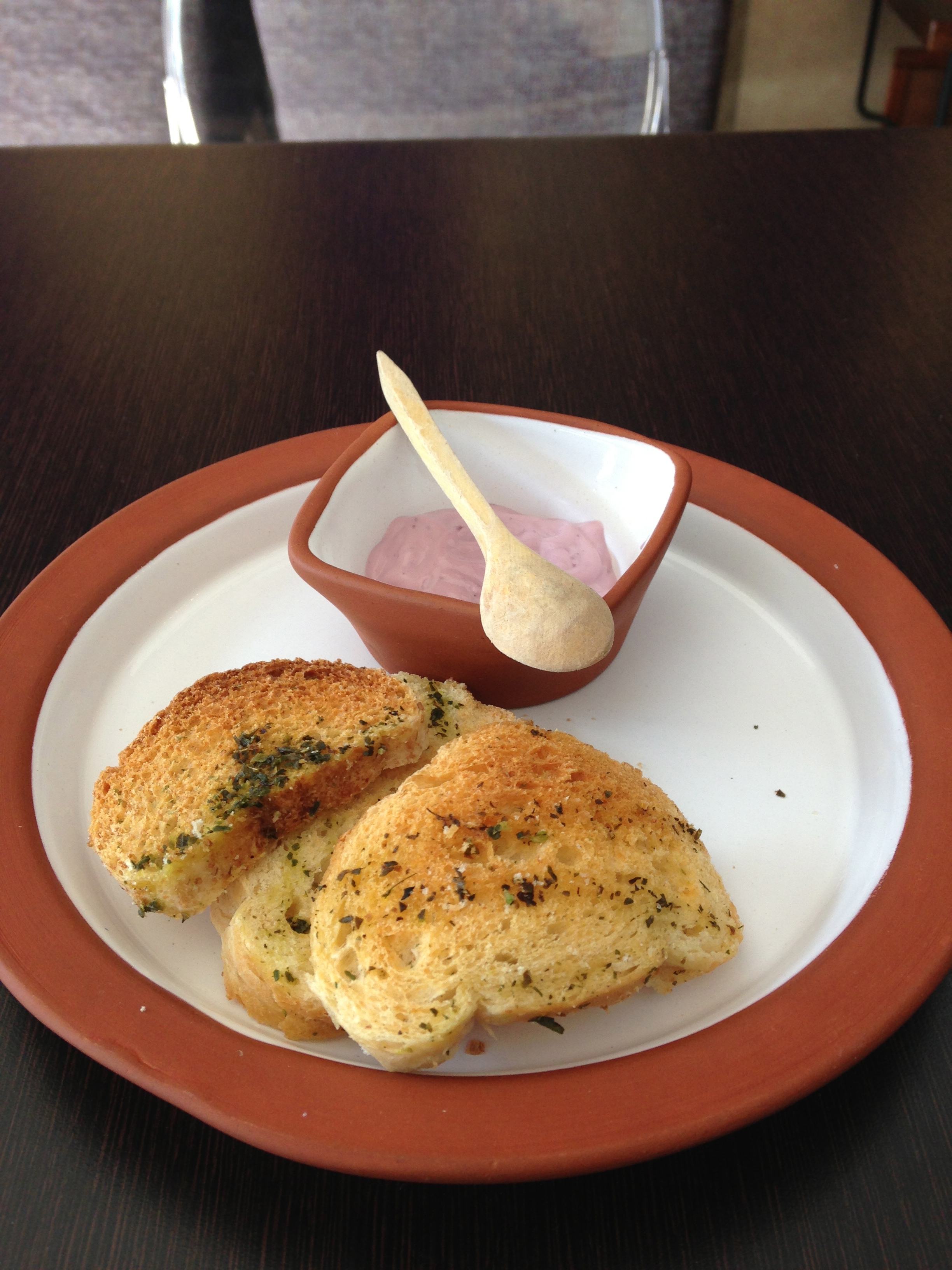 As I munched on the bread, I got my passion fruit juice. I really am in love with this stuff! It is really sweet with a tangy hint to it. I looked up passion fruits online and it looks so gross, but it really tastes great! 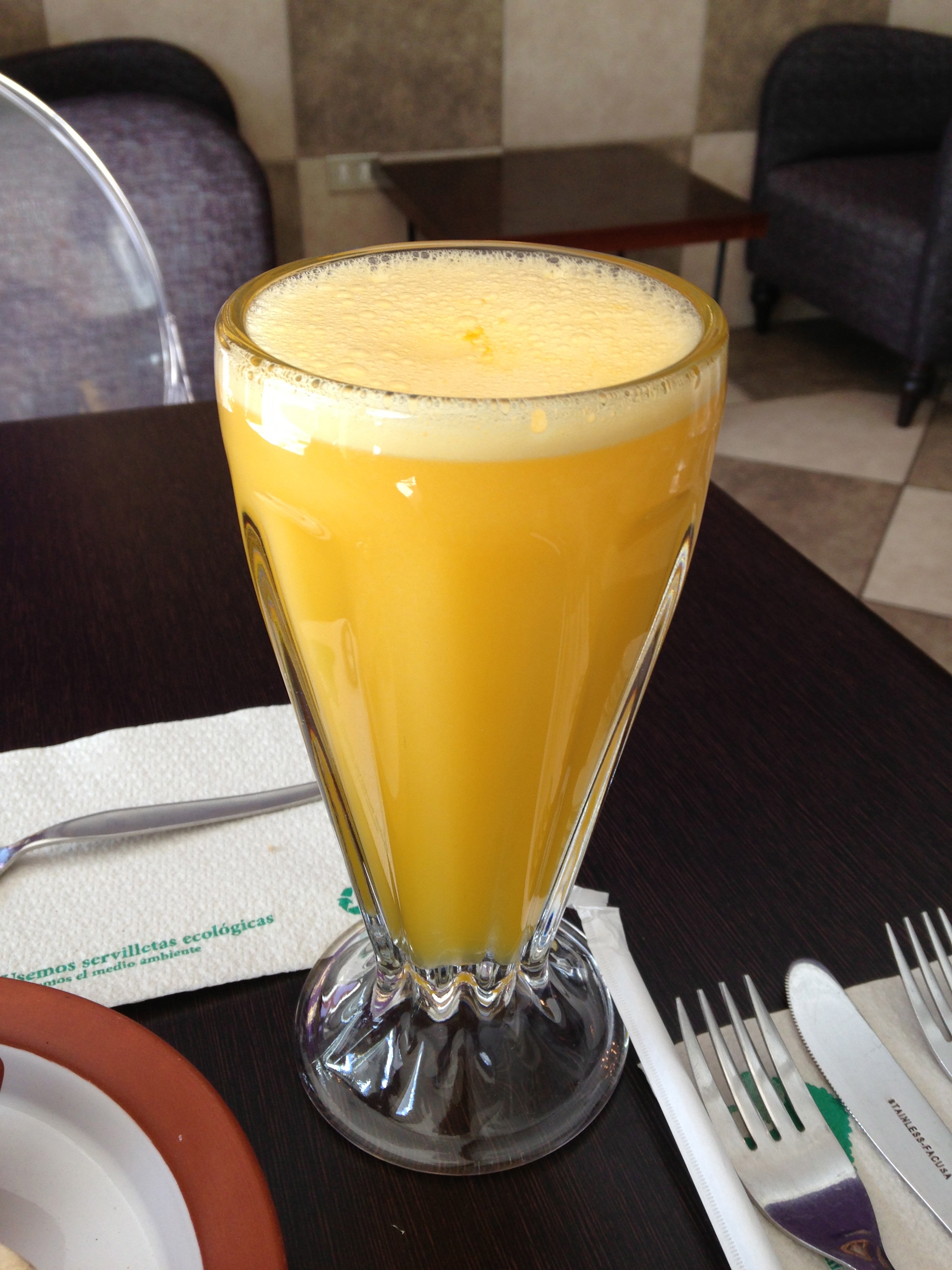 From here I got a bit of an interesting twist. It turns out that I had ordered ceviche. It was a trout ceviche that came with two sauces. The left one is more lemony while the orange colored one was milder. The skewers of corn were interesting. They weren’t crunchy, but they weren’t soft like I’m used to corn being. It was a kind of soft and chewy texture, and they were sweet. Overall, it was really good. I don’t think that I would have ever ordered ceviche here deliberately, so I’m kind of glad that I accidentally got some! 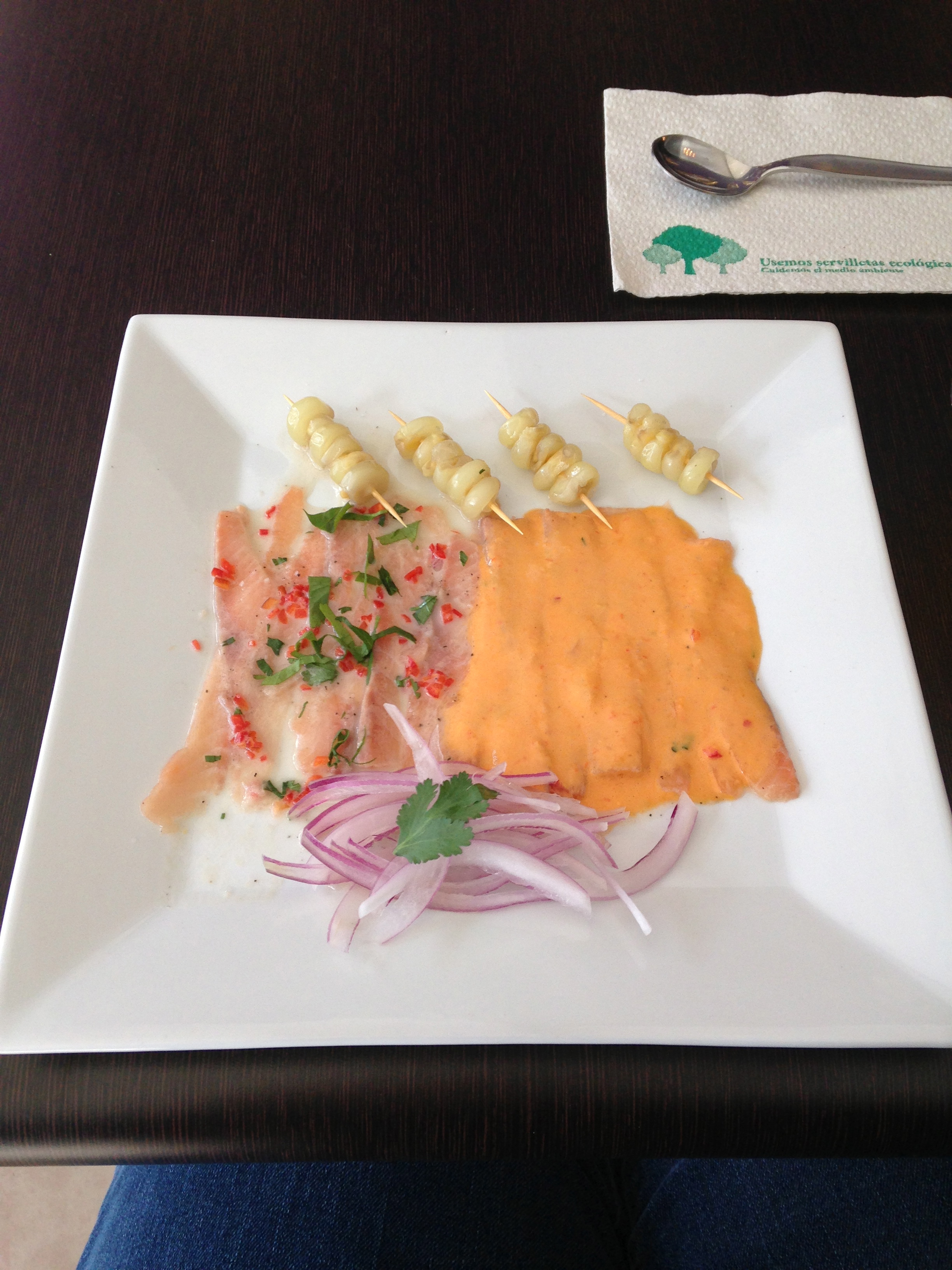 After all that I finally got to the main course, which turned out to be a fried rice dish. It was really wonderful. There were some of those odd foam-like white noodles on top. It had sliced omelet-style egg, chicken, red pepper and some sort of green vegetable. I don’t know what it was. It was sliced very thin. Despite the fact that it didn’t seem undercooked it was extraordinarily crunchy. The rice was very well flavored. It wasn’t quite sweet and it wasn’t quite salty. The flavor wasn’t overwhelming, but it was also strong enough to be tasted when there was a big chunk of chicken or egg in the bite. I think the worst thing about this was that I ate too much (there really are some seriously huge dishes here!). 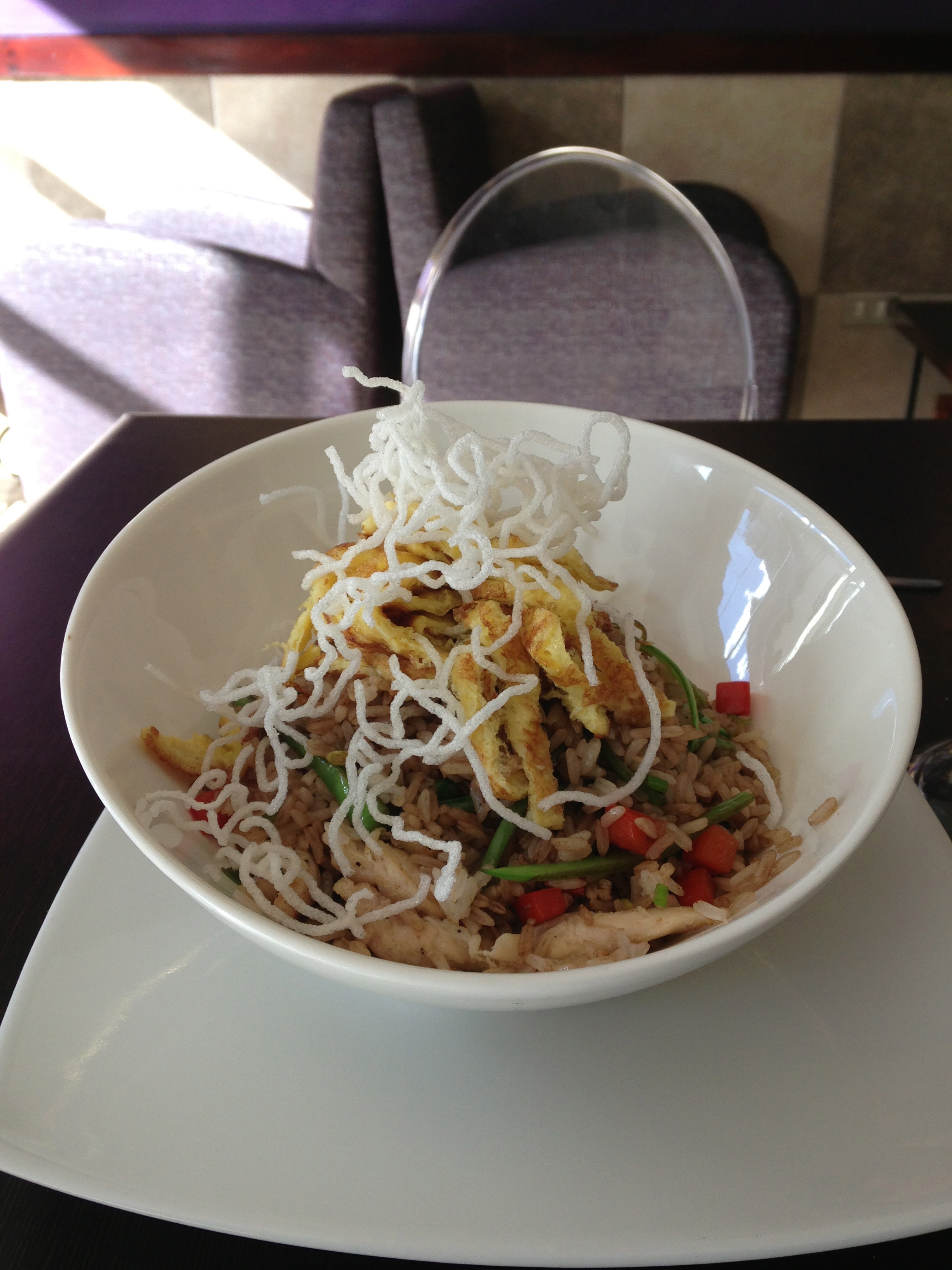 Despite the fact that I really didn’t need more food at this point, there was one more course. Dessert.

For dessert they brought out some flan. I haven’t had this here yet because I assume that flan is a pretty basic dessert that is widely available back home. But this was some seriously good flan. It was nice and creamy, and there was lots of the flavorful sauce. I think that a lot of flans that I have had back home don’t have enough of the thin brown sauce that comes with it. This one had enough, and I think the flavor was stronger, too. 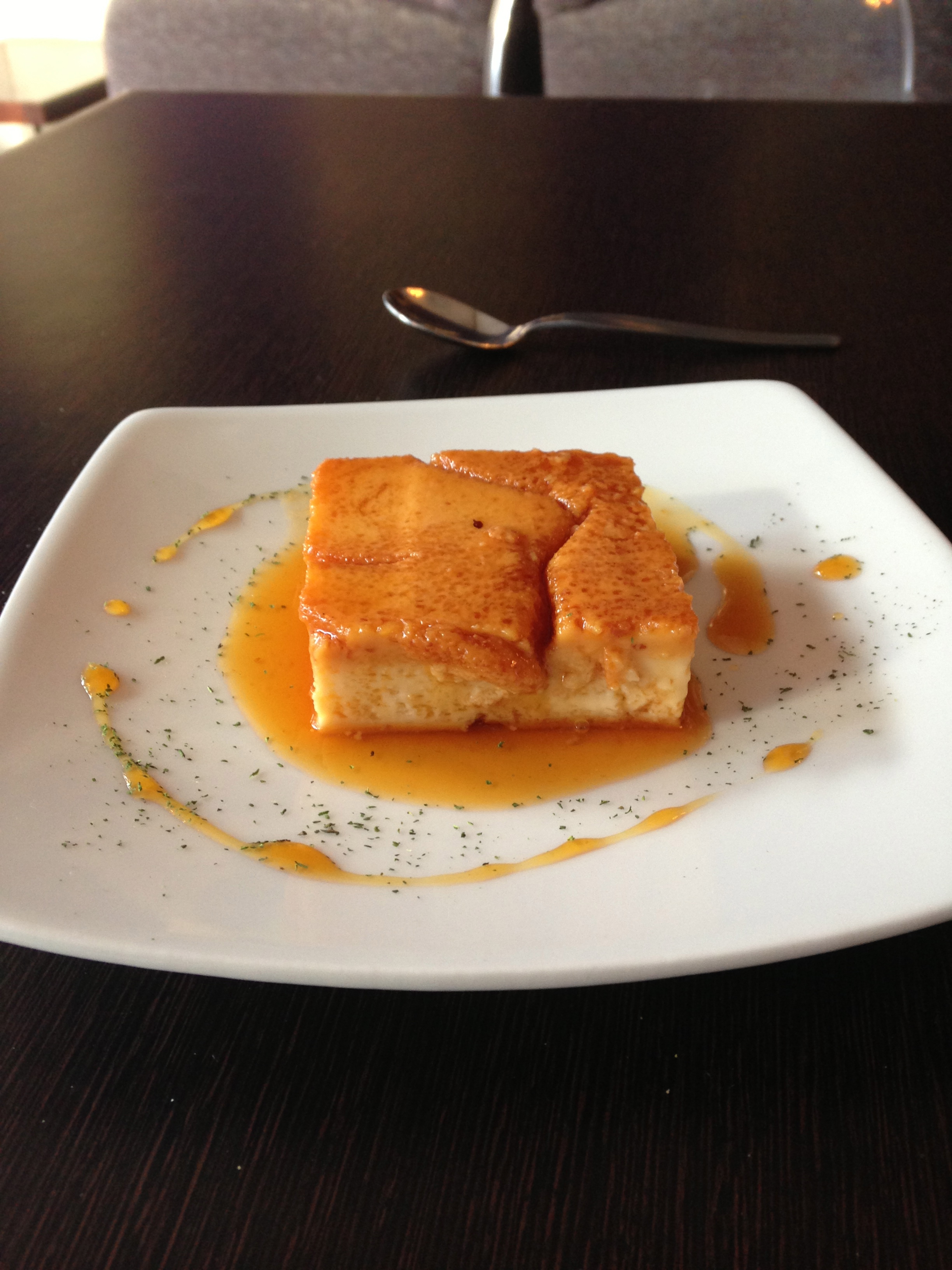 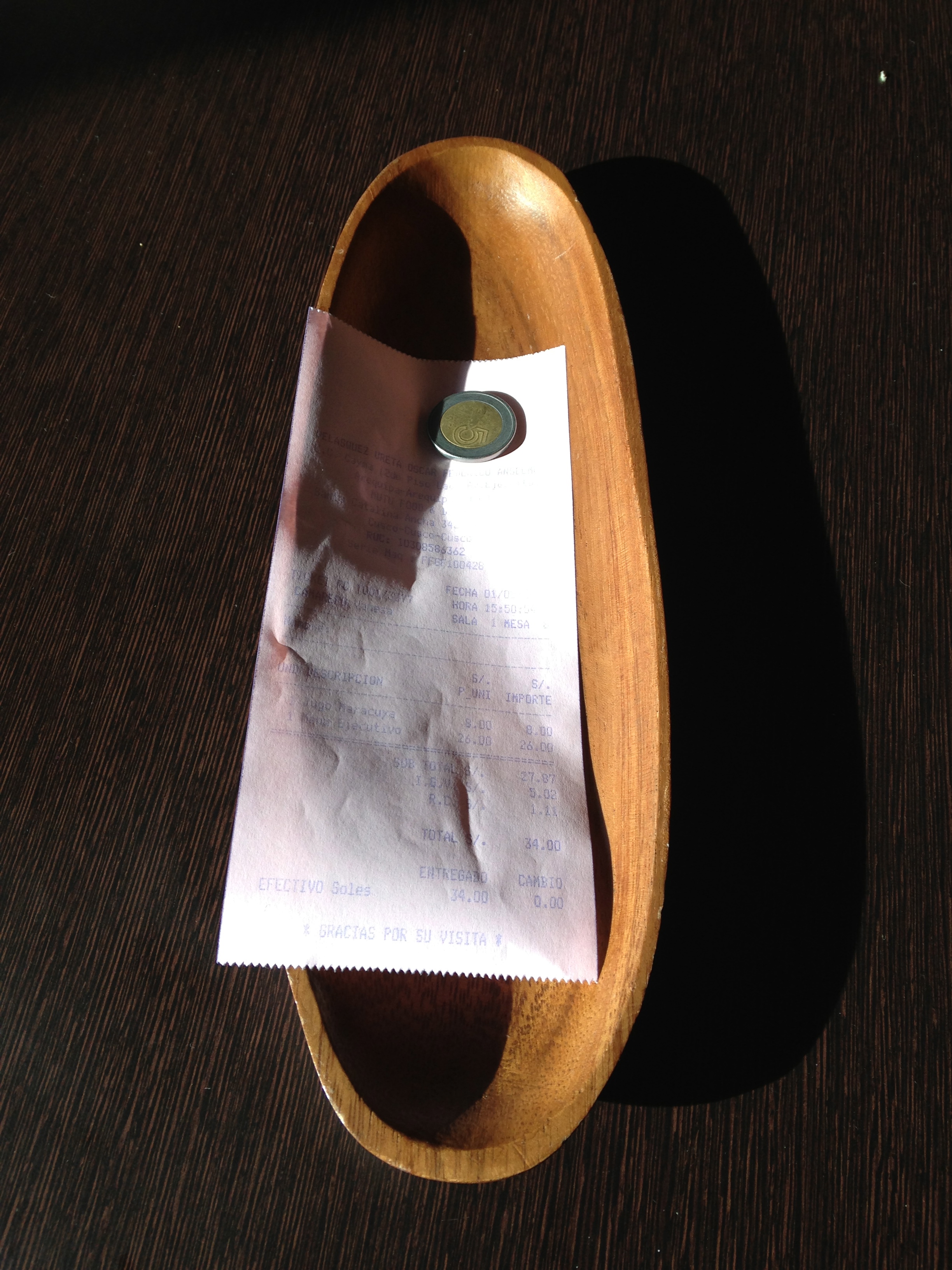 On the way out, I found the written menu of what I ordered. Overall, I thought that this was a great restaurant. In addition to the great food, the service was really good. I was one of the two or three customers in the restaurant, but that didn’t seem to matter in other restaurants where the waiter disappears. Here it might have helped that my table didn’t put me in an area that was completely separated from the rest from the building, but it was overall much better service. My dishes were taken away when I was finished with them (as opposed to 10-20 minutes later, if at all), someone checked in on me to see if everything was alright after my food arrived (as opposed to not seeing a waiter until I spend 10 minutes trying to catch their eye and flag them down for the bill), and they were generally friendly and willing to talk to me and explain the menu. 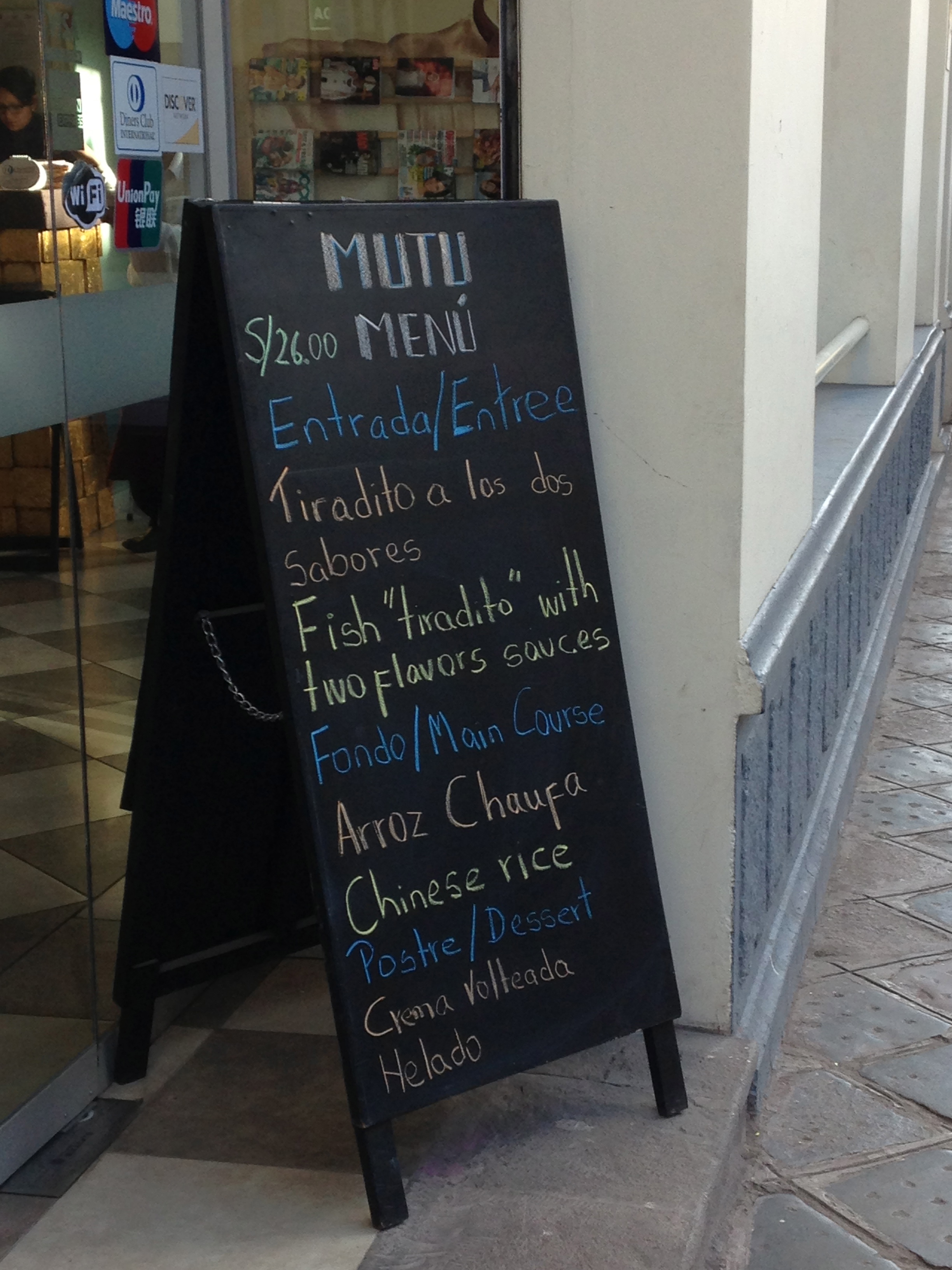 Based on everything, I would say that I definitely plan to go back. I only wish I had found out about them sooner!