For the students who signed up through USL, this study abroad trip included several tours. By signing up through USIL, these tours were not included. Luckily, once I got here and we realized that these trips weren’t included the USIL students all found out what travel agency these tours were through and managed to get added on. I knew that I wanted the Macchu Picchu tour. It would almost seem embarrassing to come all the way to Cusco, Peru and not see Macchu Picchu! There were two other tours offered. One was a tour of Cusco city. I’m not sure why I didn’t sign up for it now, but that might be because of how great this tour was. The other tour offered was the Sacred Valley tour. I hesitated on purchasing this one. It was another $75, and I was planning to go to Pisac to shop the weekend before anyway. I ended up deciding that it might be worth it, and I am really glad that I did!

The tour started around 8am, so I got up at 6:30am to have time to get ready and eat breakfast. This felt like a ridiculously early time to be up on a Sunday. I thought that the tour was supposed to last until around 4pm (I really don’t remember where I heard that from…), which would be a pretty long tour. In reality, it lasted until a little after 7pm!

The tour started out with what should have been close to a 40 minute or an hour bus ride (I am basing this off of the time it took to get to Pisac by myself). Instead, we got our first surprise. We had an extra stop that wasn’t included in the package (that I know of). We stopped at the Ccochahuasi Animal Sanctuary. Looking online, I found that it is a family owned organization that started in 2007. It helps to rescue abused animals or to help animals that are in danger of extinction. Some of the animals we got to see included alpaca (huacaya and suri), pumas, tropical birds, vicuna and condors. There were other animals, but I’m not sure what types. The group was large and I didn’t hear everything (or remember everything!). 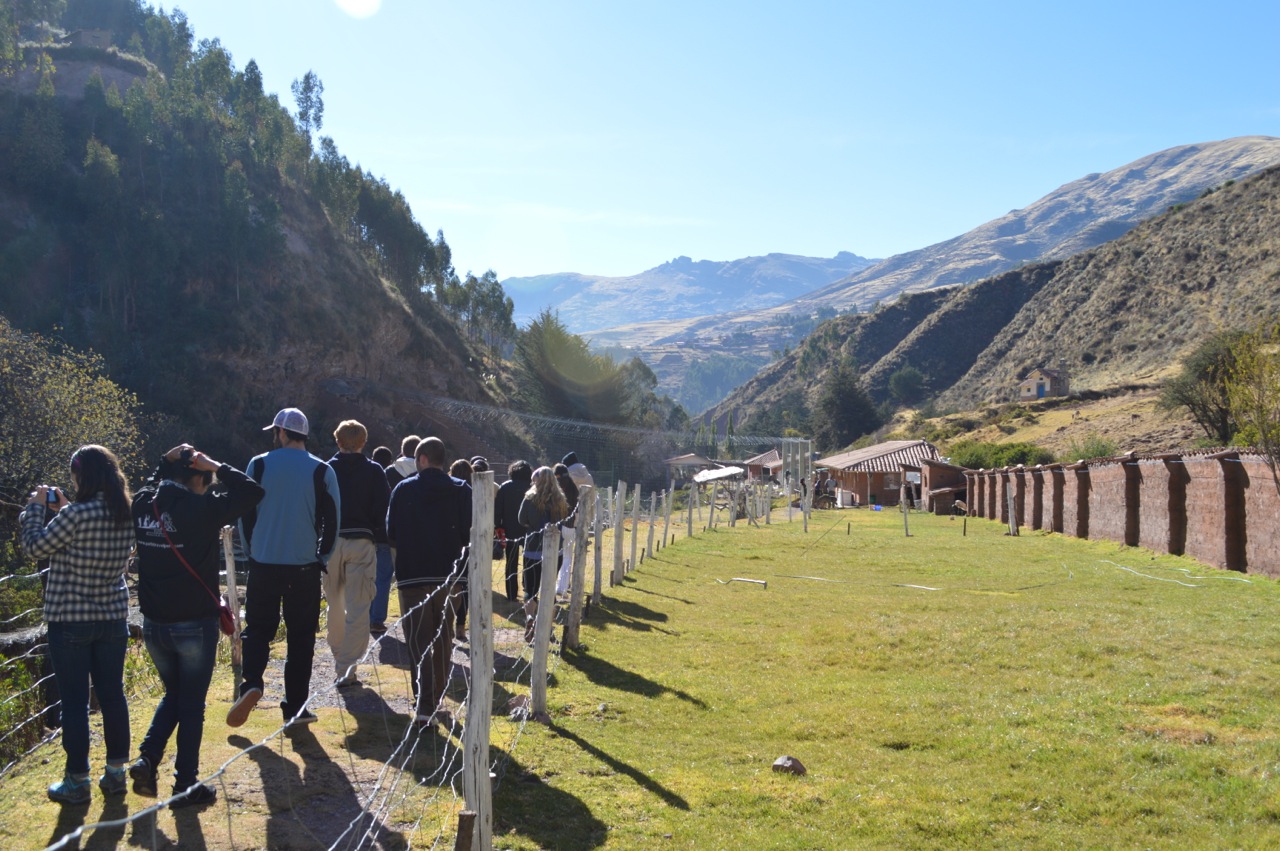 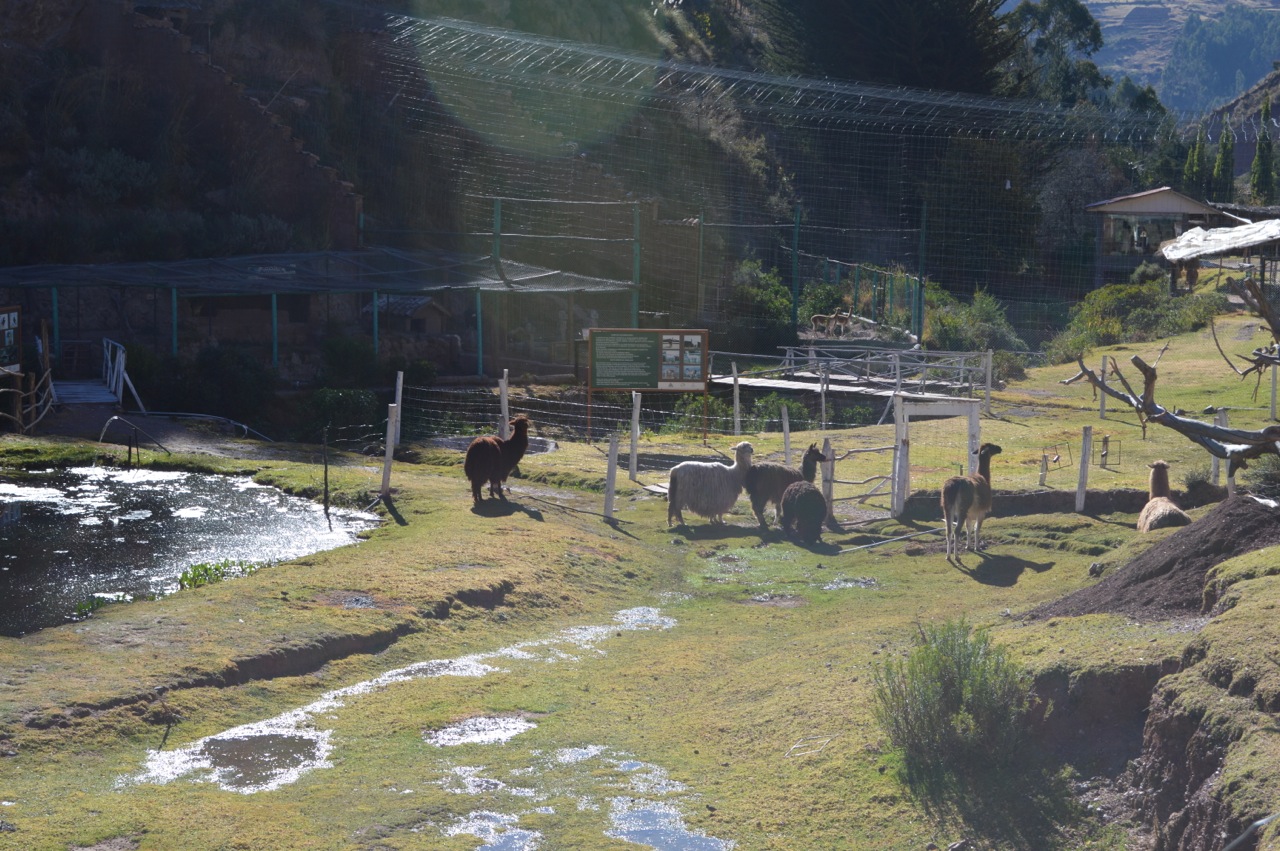 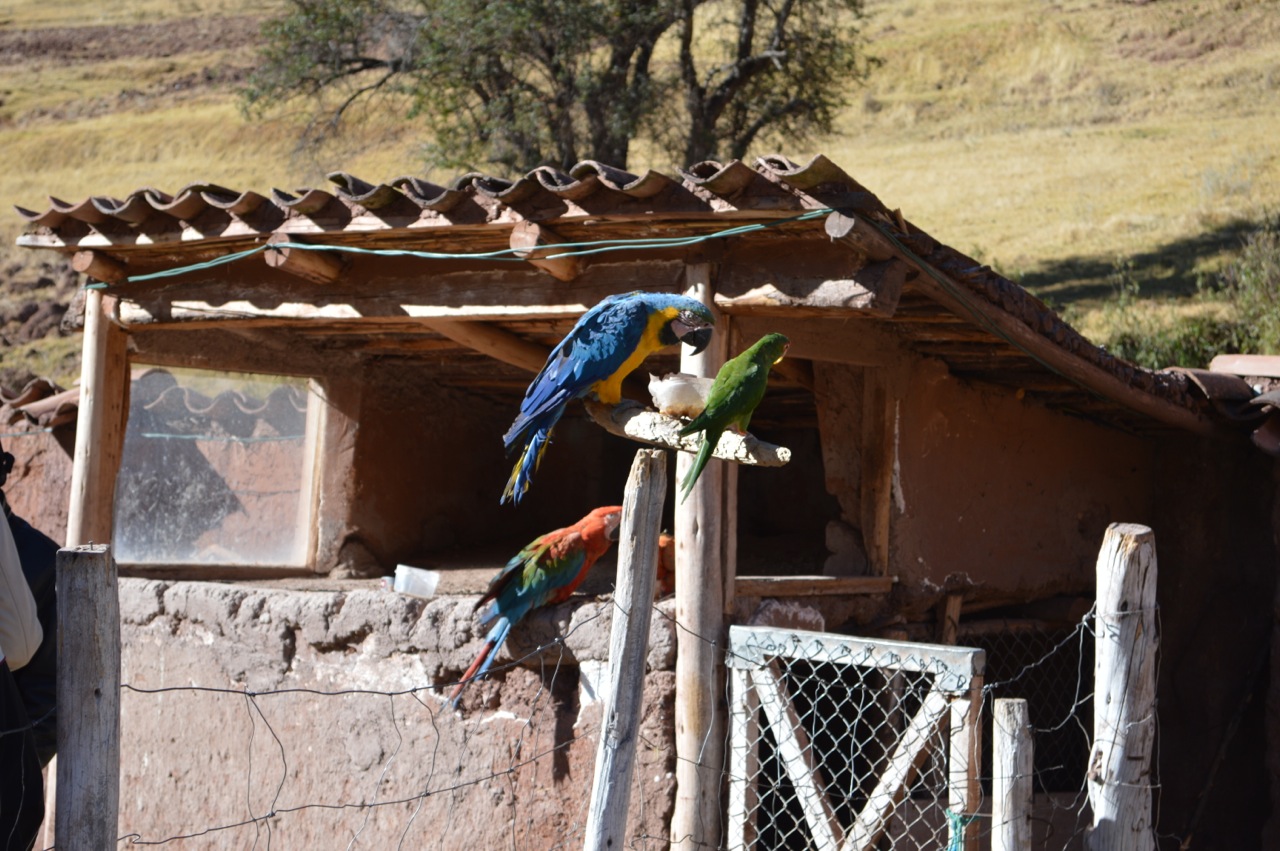 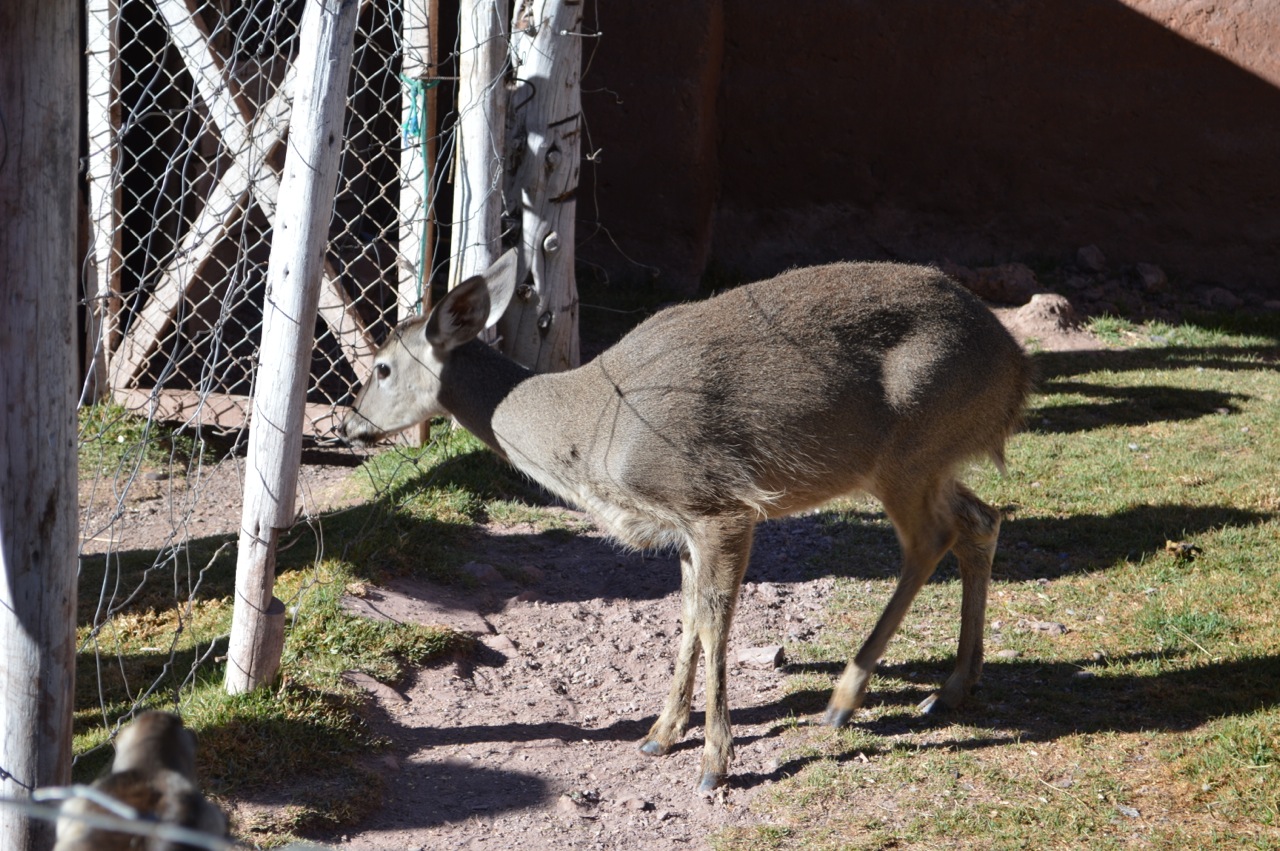 Don’t you love how they pose? 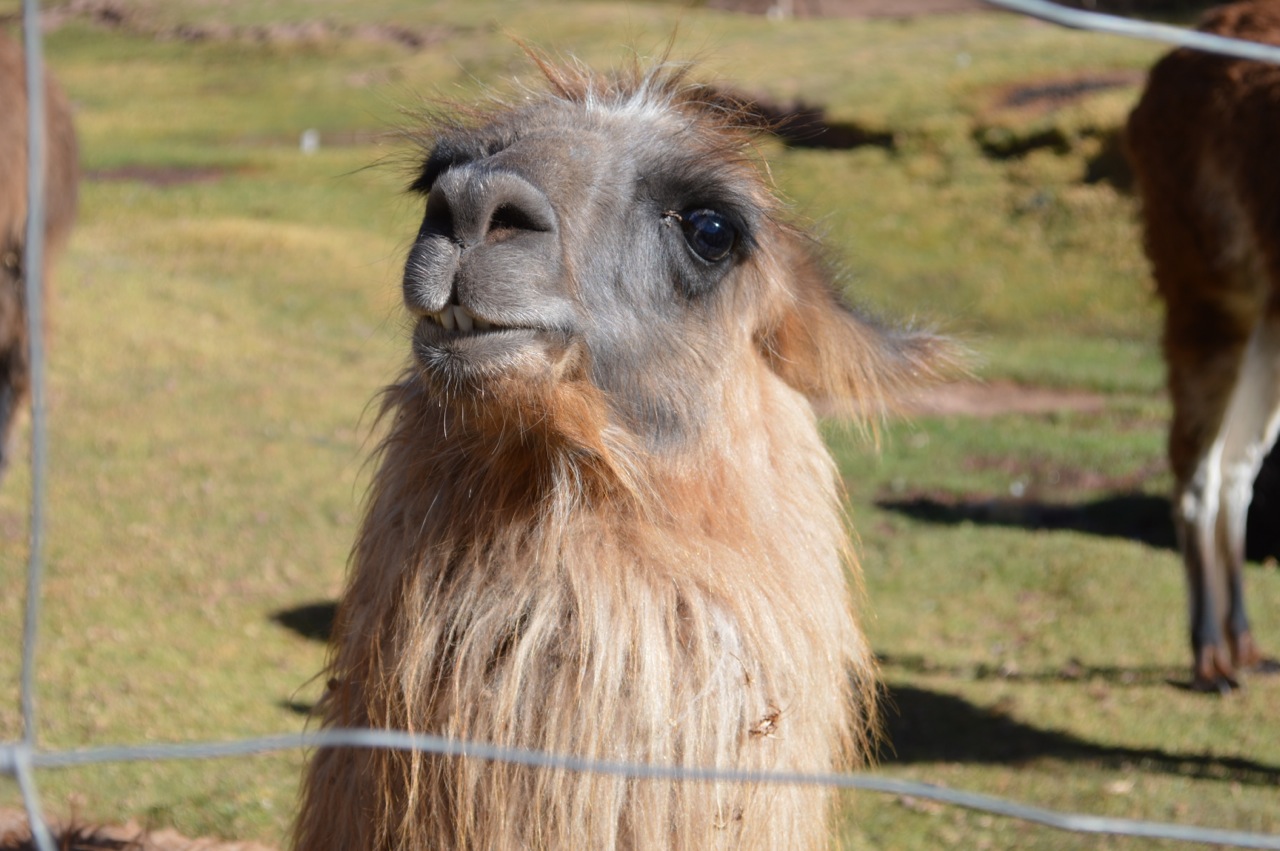 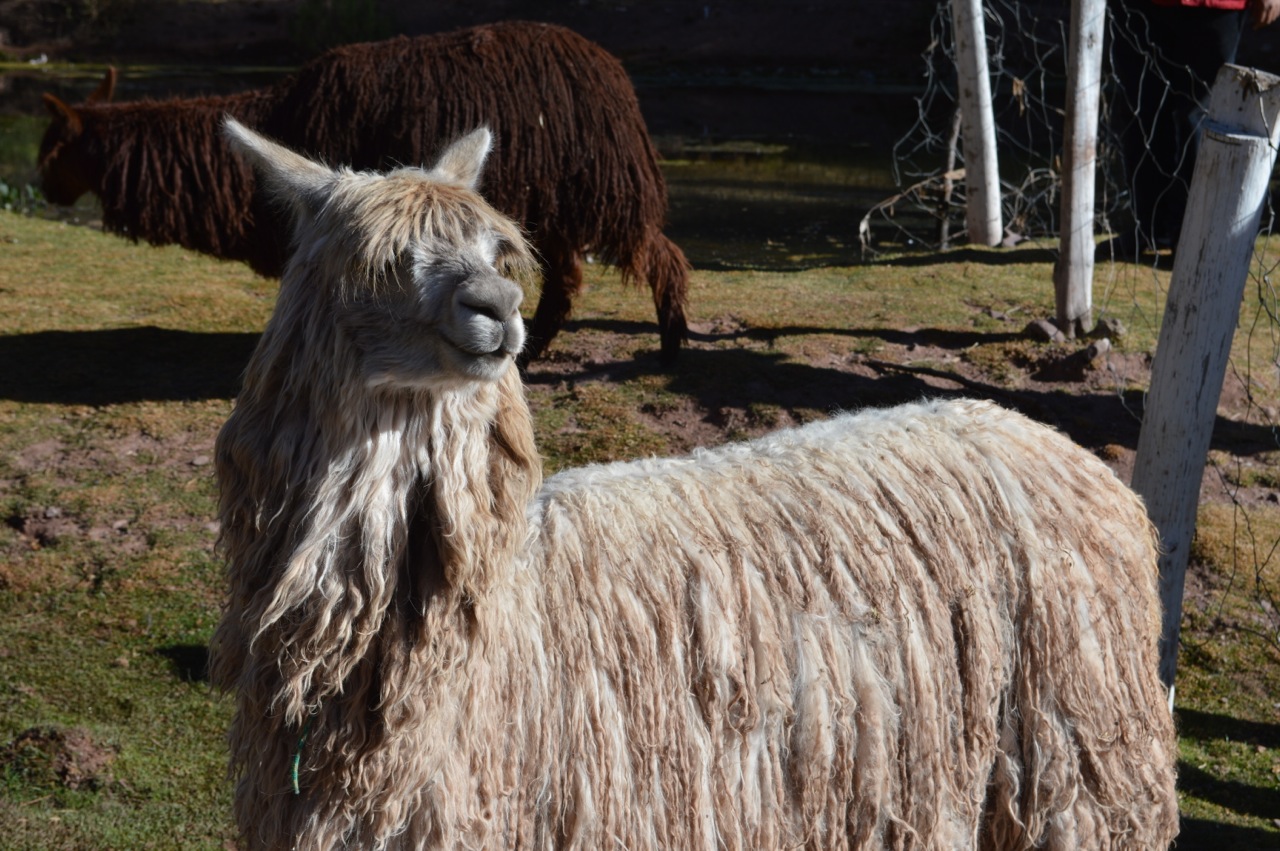 This is the vicuna. 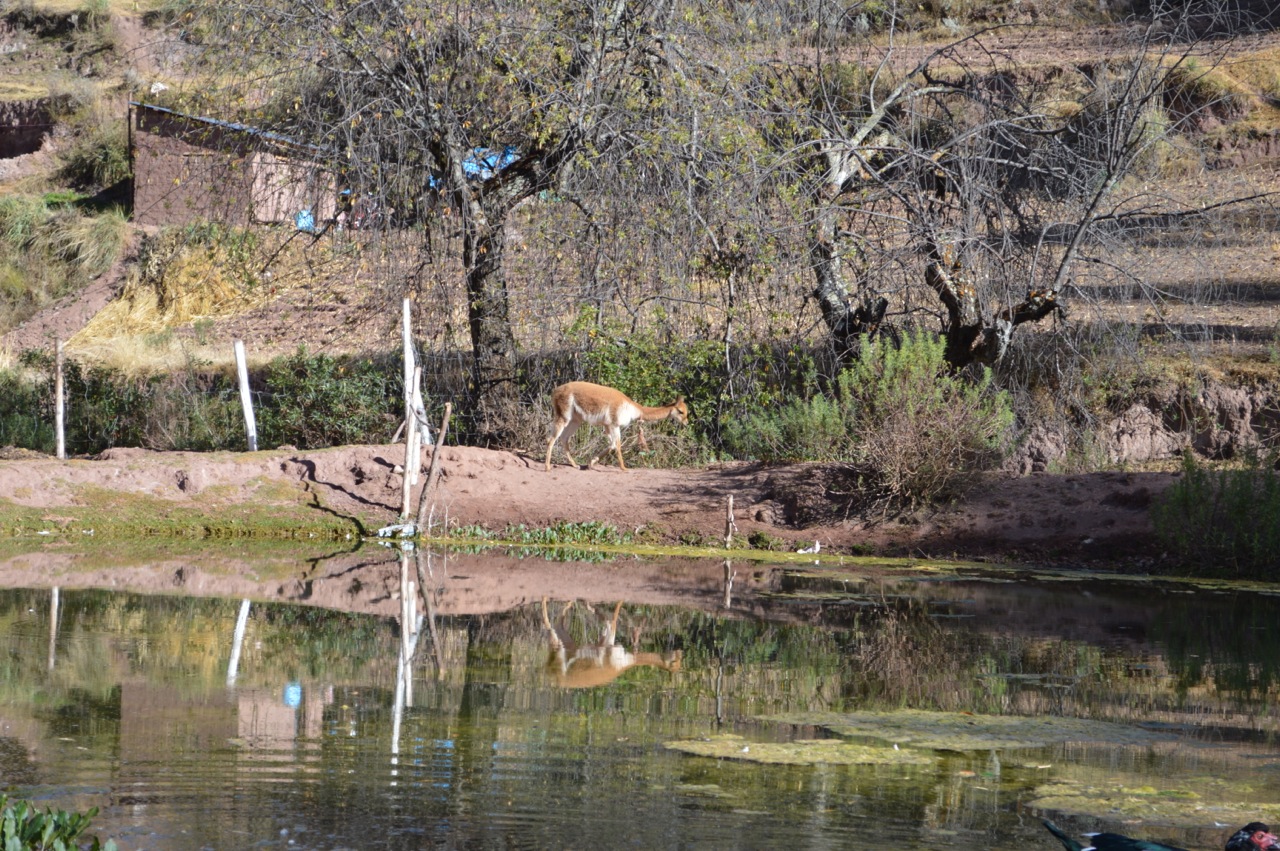 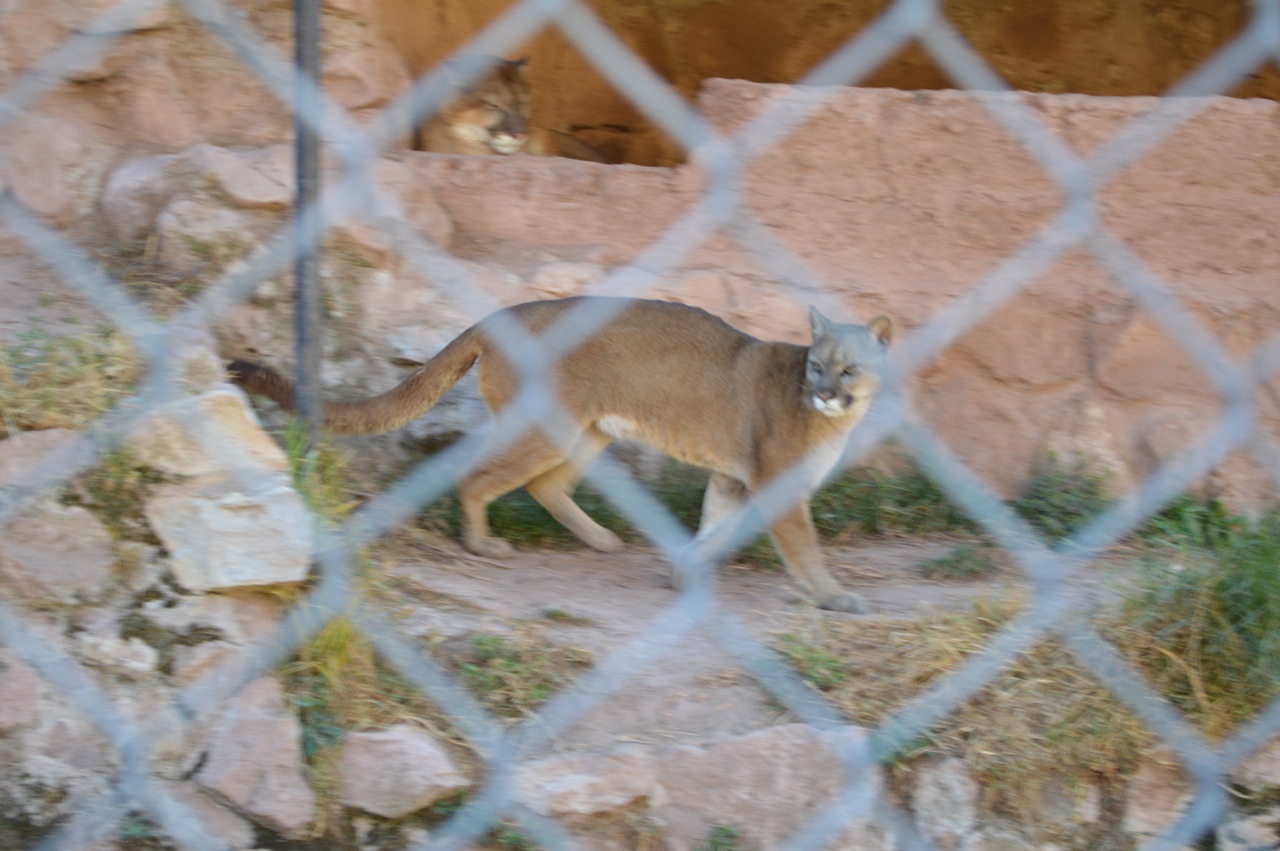 Condor. This bird is very important in Peruvian history. It is related to the vulture. 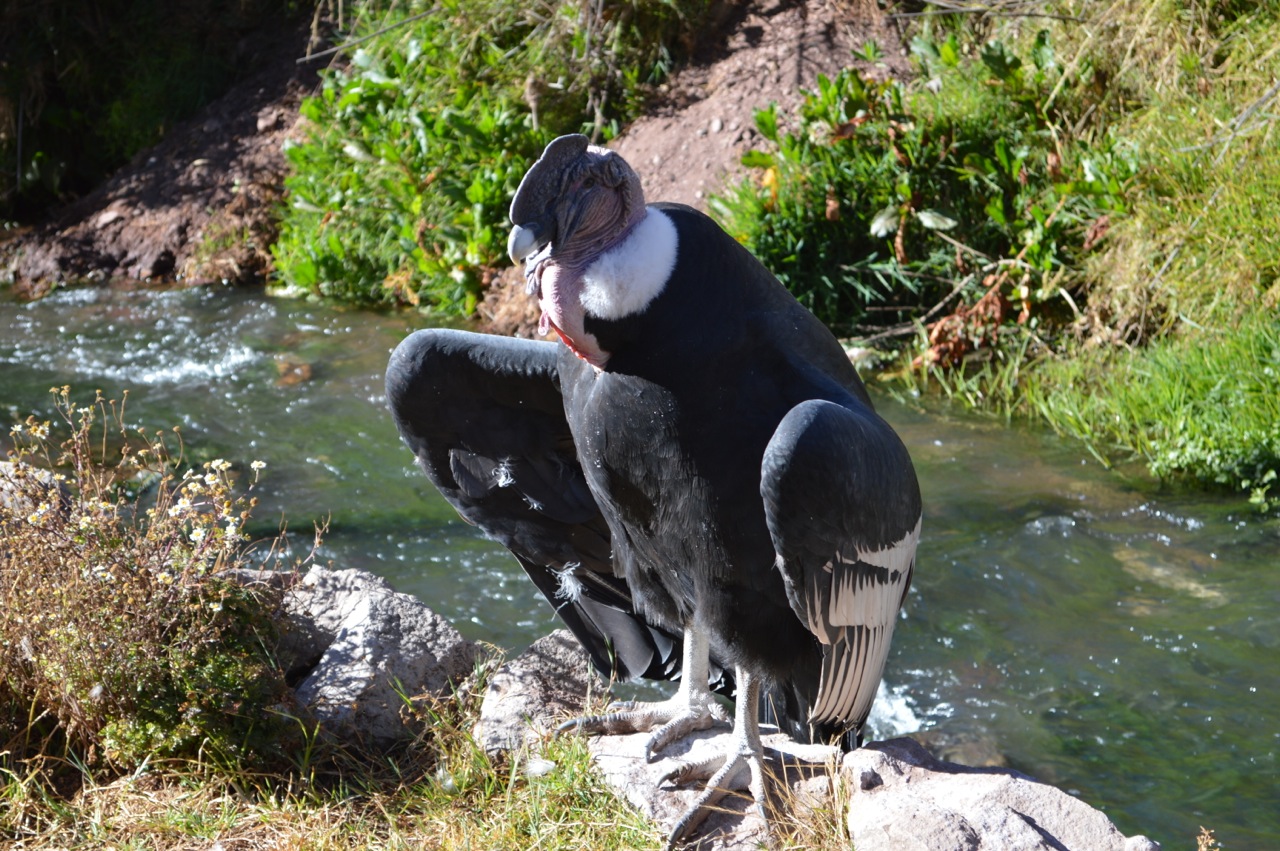 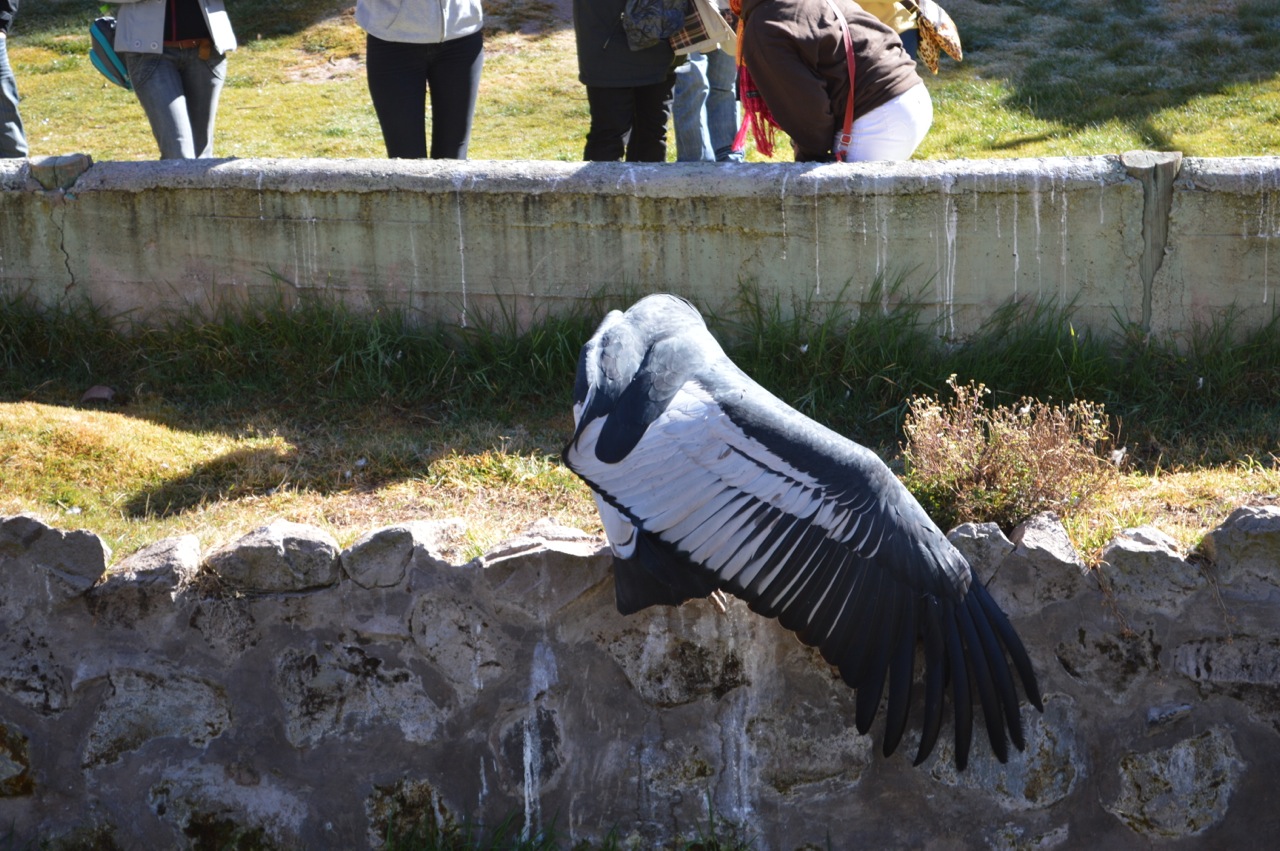 From there, we went on to Pisac, the first stop in our itinerary. During the bus ride, we learned some interesting information from our guide. Apparently, it is incorrect to refer to the people of the ancient Incan civilization as Incas. There was only one Inca: the king. The rest of the people were called Quechua, and they are still around today with people still speaking the Quechua language.

Luckily, we didn’t walk all the way down to the town below, but by the way I felt we might have! We got to see some ruins, and the views were spectacular! On the way, there was a guy playing the flute. It really was magical feeling to be listening to a flute in the mountains. 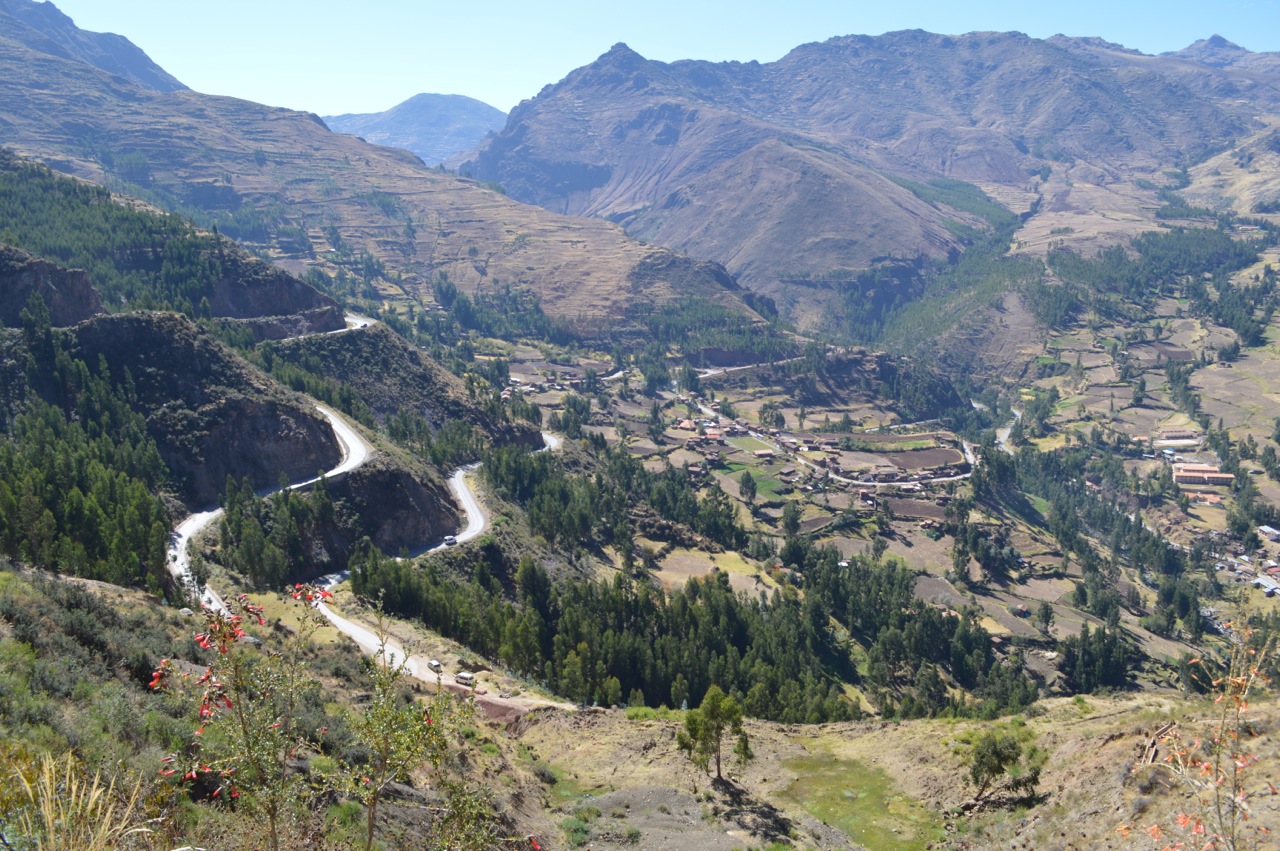 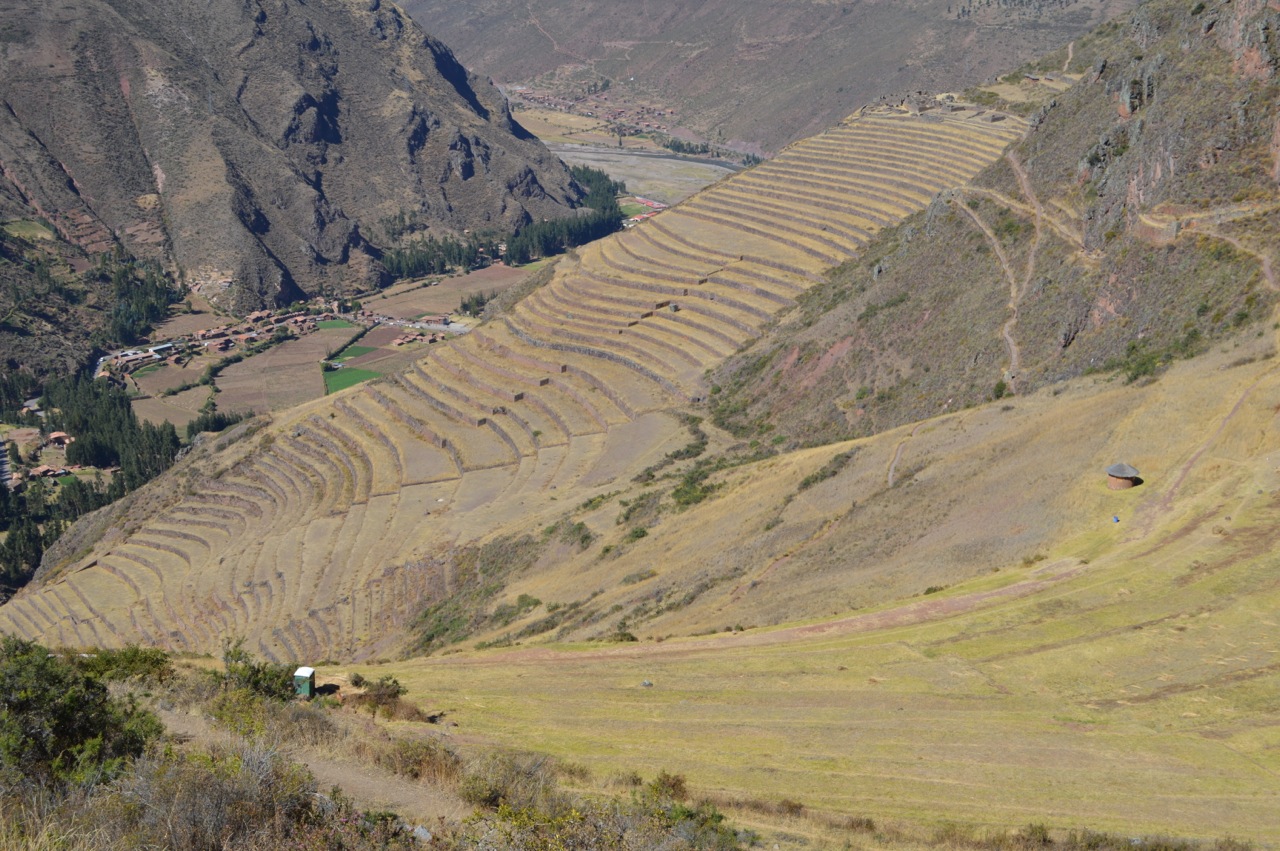 This may be hard to make out in the picture, but this entire cliff was an ancient graveyard. Each little hole in the wall leads to a tomb with a mummified body in it. 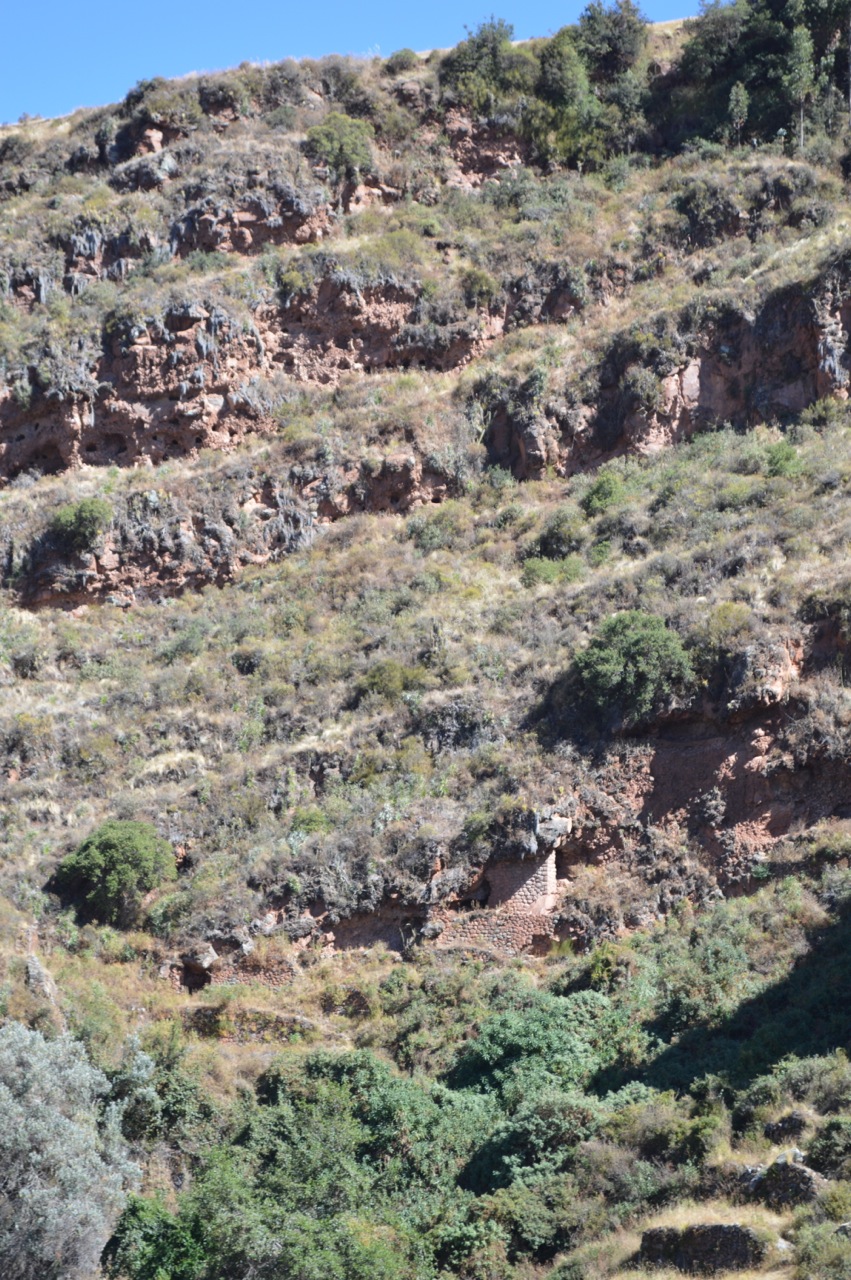 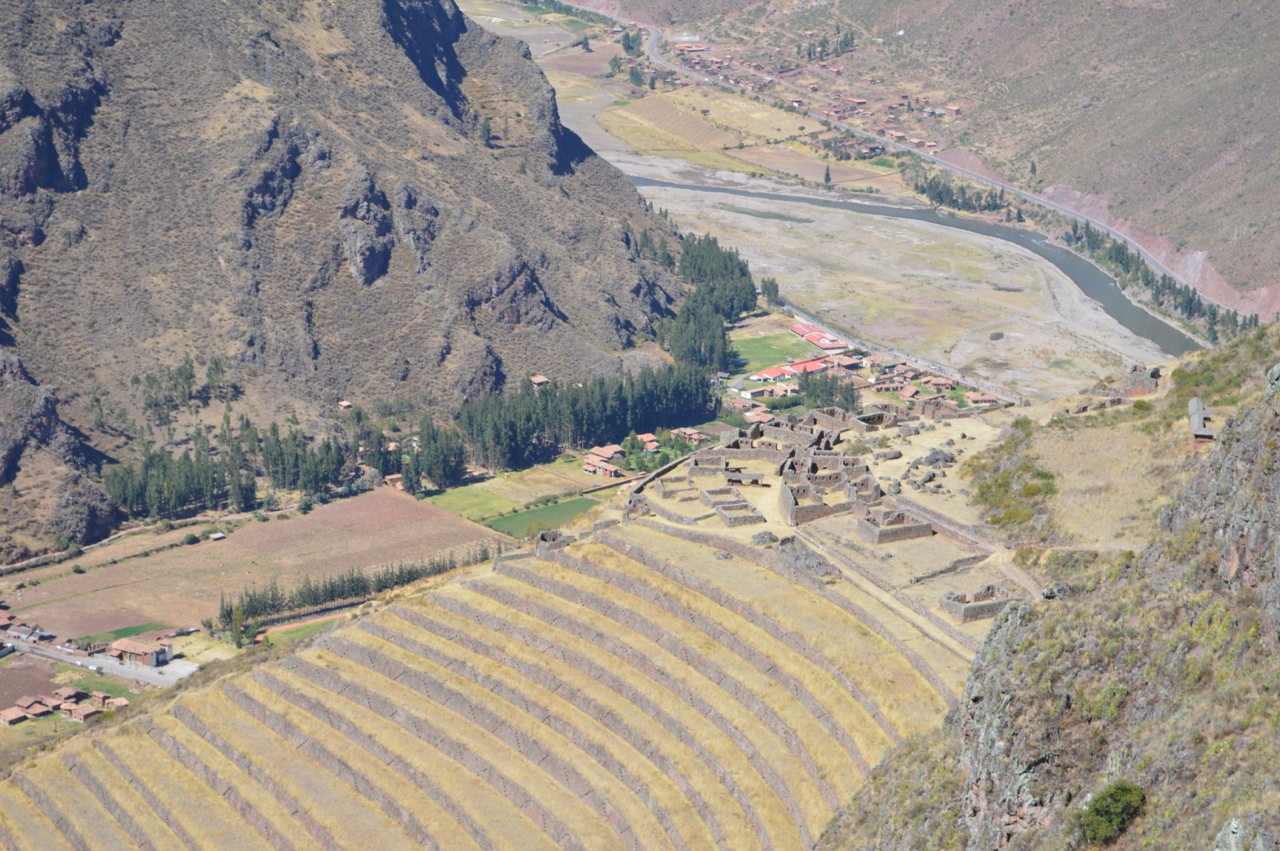 Looking back, I wish that I had gotten more pictures of different things, like the main part of the city or pictures in the city itself. After the exhausting hike, we went down to the Pisac market. I am really glad that I went separately! When I told people that I was going to go the week before this tour they seemed to think that it was odd, but during this tour we only had 25 minutes to shop! That is not enough in a market that I got lost in several times and never managed to see all of it! Unfortunately, or fortunately (depending on how you look at it…) I was very low on cash (aka: I spent it all at the animal shelter instead of using a credit card) so I just looked around. You would think that I would spend that time taking pictures, but apparently not. Our meeting spot was this colonial-era oven that bakes some great empanadas. Luckily, those were provided to us without a need of cash! It was very good. It was a fresh-from-the-oven onion and cheese empanada. 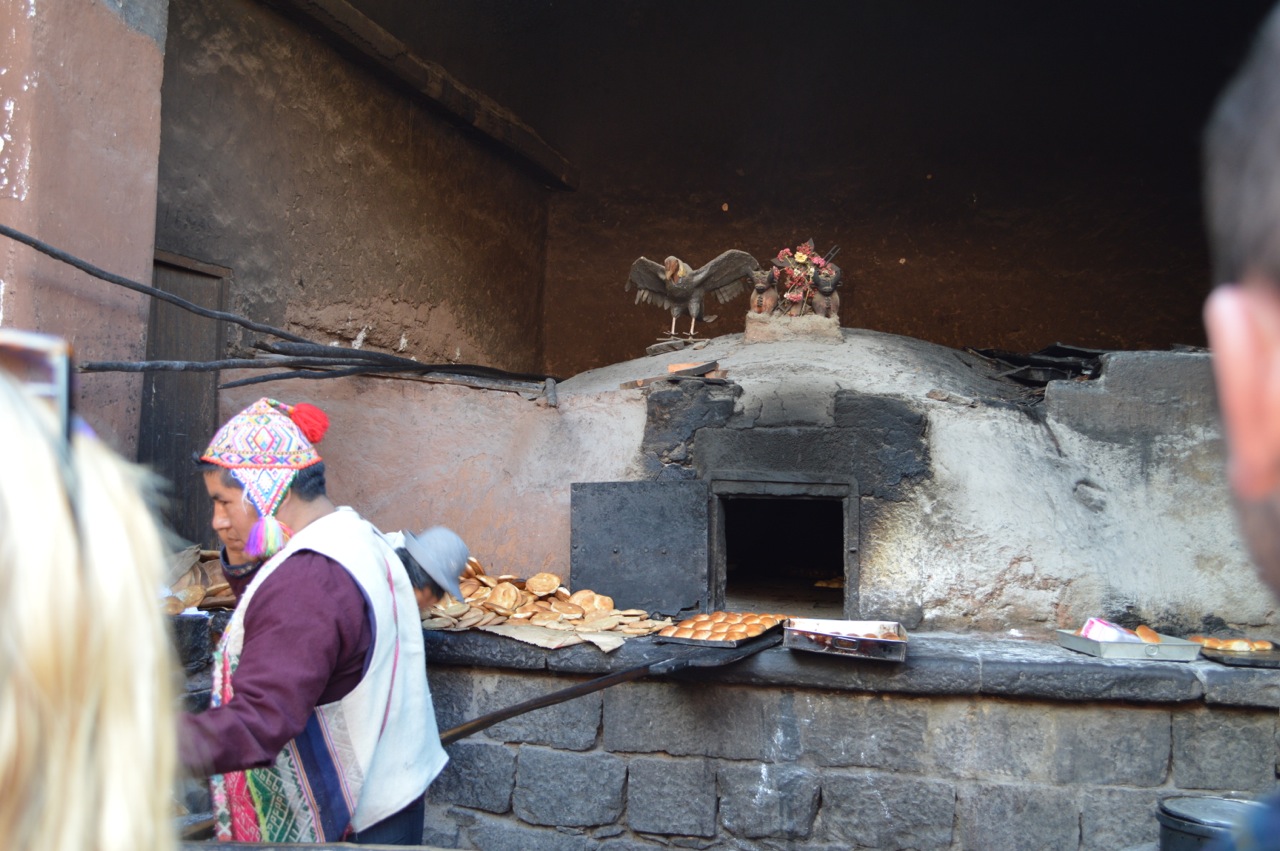 From here, I was pretty exhausted, so I’ll blame my use of my iPhone instead of my big camera on that…

Our next stop was lunch, luckily. I was pretty hungry. Unfortunately, the area was so beautiful (and I was so hungry) that I forgot to take pictures of the food… It was a very good buffet and they had very expensive bottled water that I needed to borrow someone’s cash to buy. (Seriously, it cost 7s/. compared to the 1 or 2s/. that it costs in other places!)

Out back, there was a garden with some alpaca and a river. 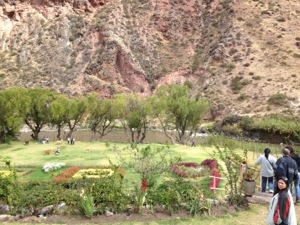 This is a picture of the back of the actual restaurant. 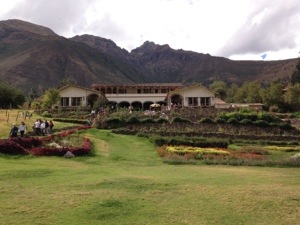 There was a spot where you could walk right up to the river. I was tempted to dip a toe in it, but it was rather mossy looking this close to the bank. There were some kids having fun throwing rocks into the river, and overall it was pretty peaceful feeling to be able to just be there. 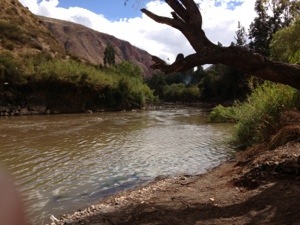 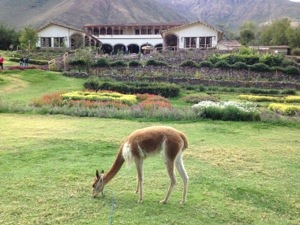 From there, the next stop was Ollantaytambo. Let me just say that I hate stairs now. Seriously, those were bad stairs. Considering that the ancient peruvian societies are known for their stonework, you would think that their stone stairs would be straighter or more evenly placed! The steps were all at different heights from each other and the stones that made up the steps were sticking out at odd angles. Overall, I am happy that I didn’t injure myself. Though I did manage to get a slightly sore ankle and very sore calf muscles. 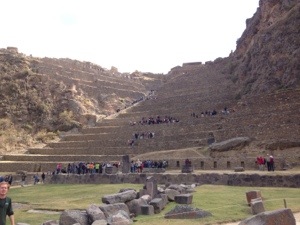 This face carved into the cliff was part of a legend that the ancient civilization had. Apparently a man who looked very different than they looked came and helped them. It was prophesied that he would return when they needed him. Our guide said that when the Spanish came (the first of whom were actually prisoners that Spain wanted to get rid of) that they thought that the prophesy was coming true.

To the right of the face is a food storage system that used windows to keep the food cool from the breeze. 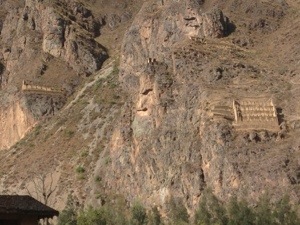 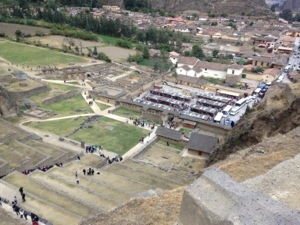 On our way to the last stop we had another surprise stop. We went to a weaving shop where they use traditional weaving techniques. We got to see a demonstration of some of their processes. They use a root to clean the wool. When they grate the root and mix it with water it bubbles up and works like soap.

We also got to see different ingredients that are used to dye the wool. A purple corn is used for purple; flowers are used for yellow; some sort of plant is used for orange; seeds are used for blue; leaves are used for green; some sort of bug that lives in cacti are used for red. The guy who was demonstrating took something off of the cactus leaf that was too small to see and smashed it on his hand. It left a somewhat large puddle of red goop that looked like blood. He demonstrated dying wool with dried red dye mixed with water. Different amounts of time mean different depths of color. Then he showed how salt, which is used to make the color set, changes the red to a more orange color.

We also got to briefly see wool being spun, thread being twisted together, and a cloth being made on a loom. This is another example of a time that it was a good thing that I was out of cash. 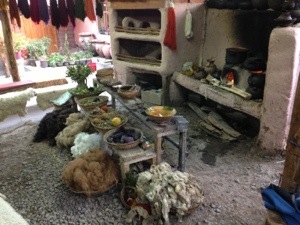 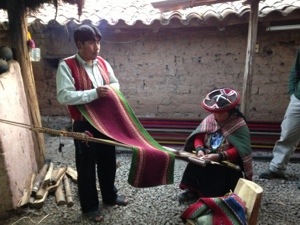 The last place we visited was the least exciting to me. It was a church. It was very beautiful inside, but no pictures were allowed. It was very pretty, but at that point I was very tired and very cold!

This tour was great, and I am really looking forward to Macchu Picchu in two weeks!