Last weekend (I know, I should be doing these posts quicker!), I went on a trip to two nearby areas. The first one was called Maras. The trip there was really great. It was about an hour long bus ride, and the group reserved the USIL bus. The bus driver we had was fun and informative, and he also stopped the bus several times in scenic locations so that we could enjoy the sights. Overall, it had me reminiscing about my trips with People to People, where we just about lived on a bus that was rented for our group. 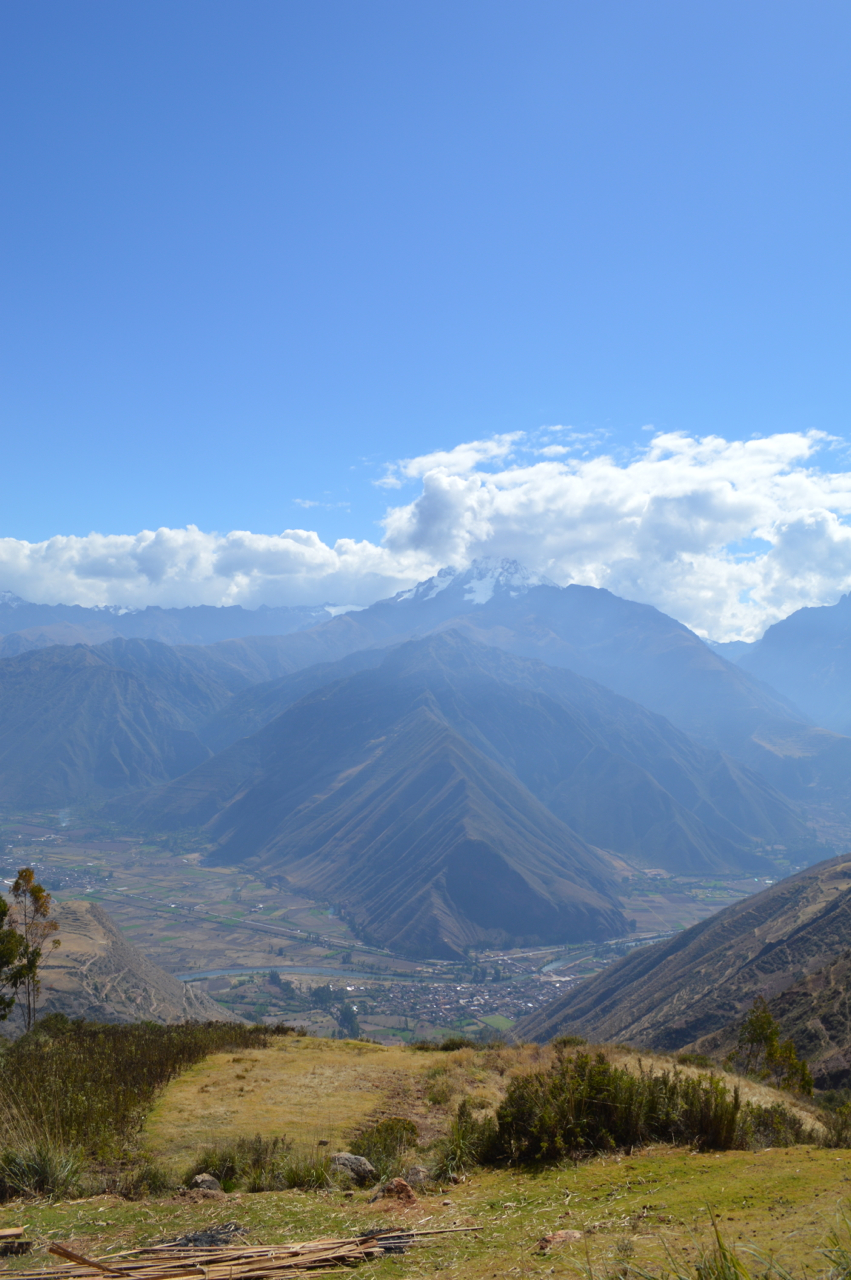 Here next to the bus are some mud bricks drying in the sun. 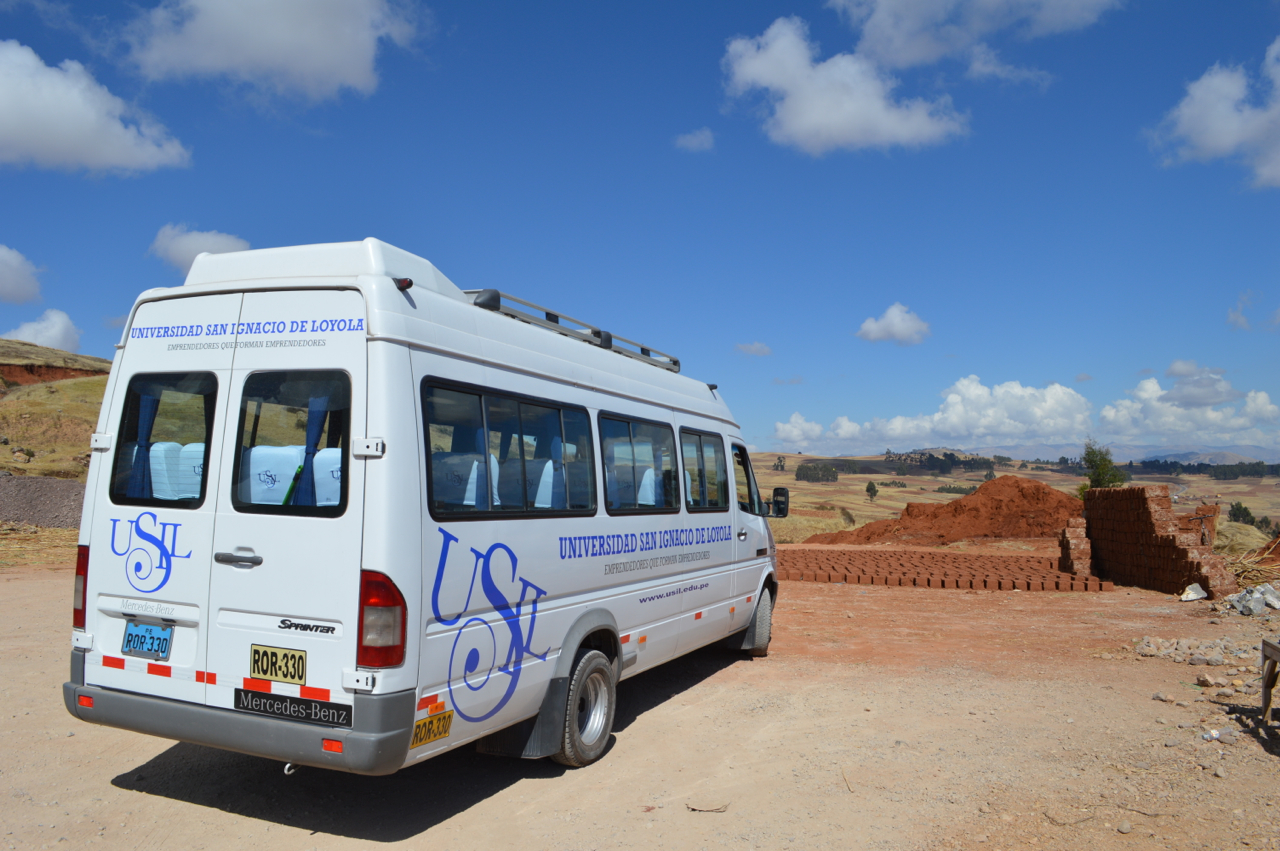 We finally arrived in Maras. It was an absolutely beautiful day. Here is a picture that shows the entire area. 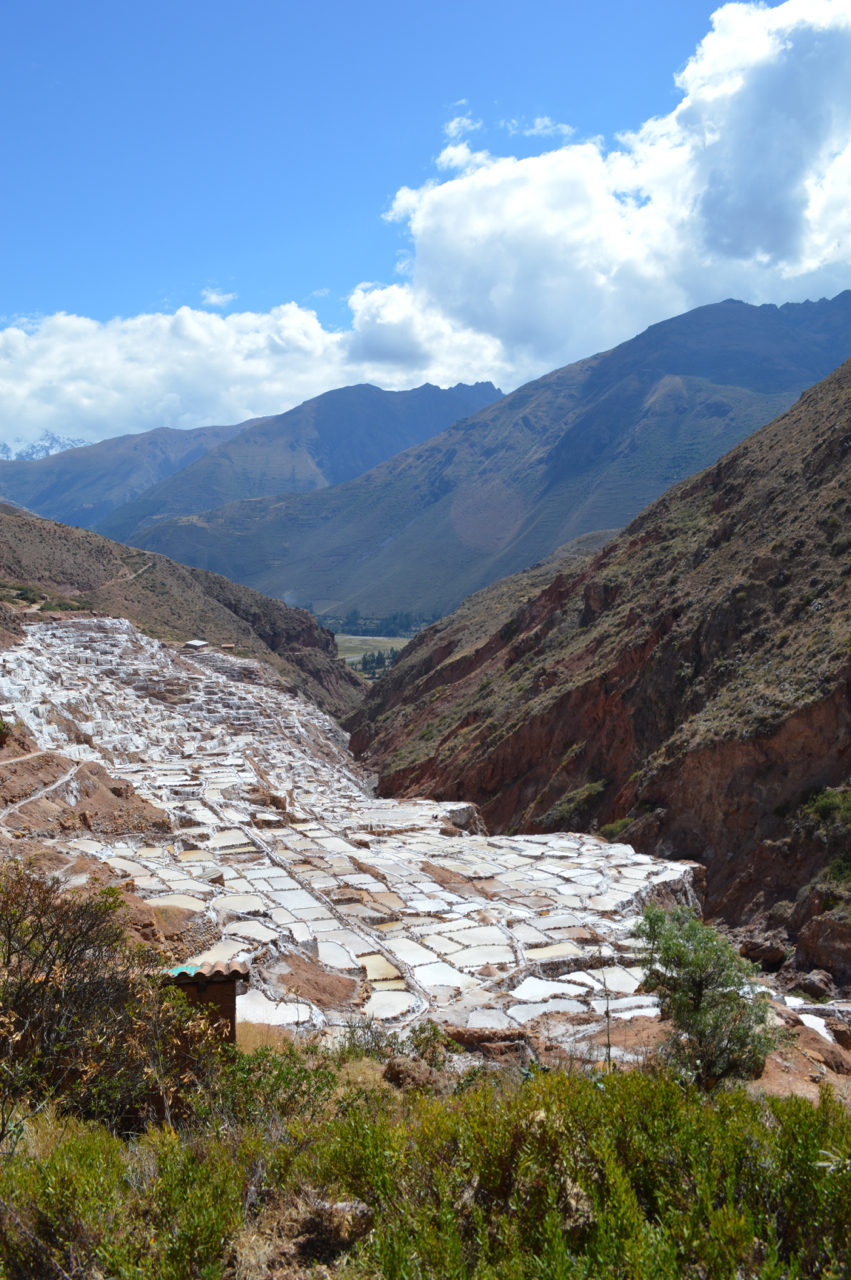 Looking up, I could barely see the winding road that we took through the mountainous area. Luckily, I managed to catch a car driving down the path, which had a trail of dust behind it. I hope it shows up okay here. 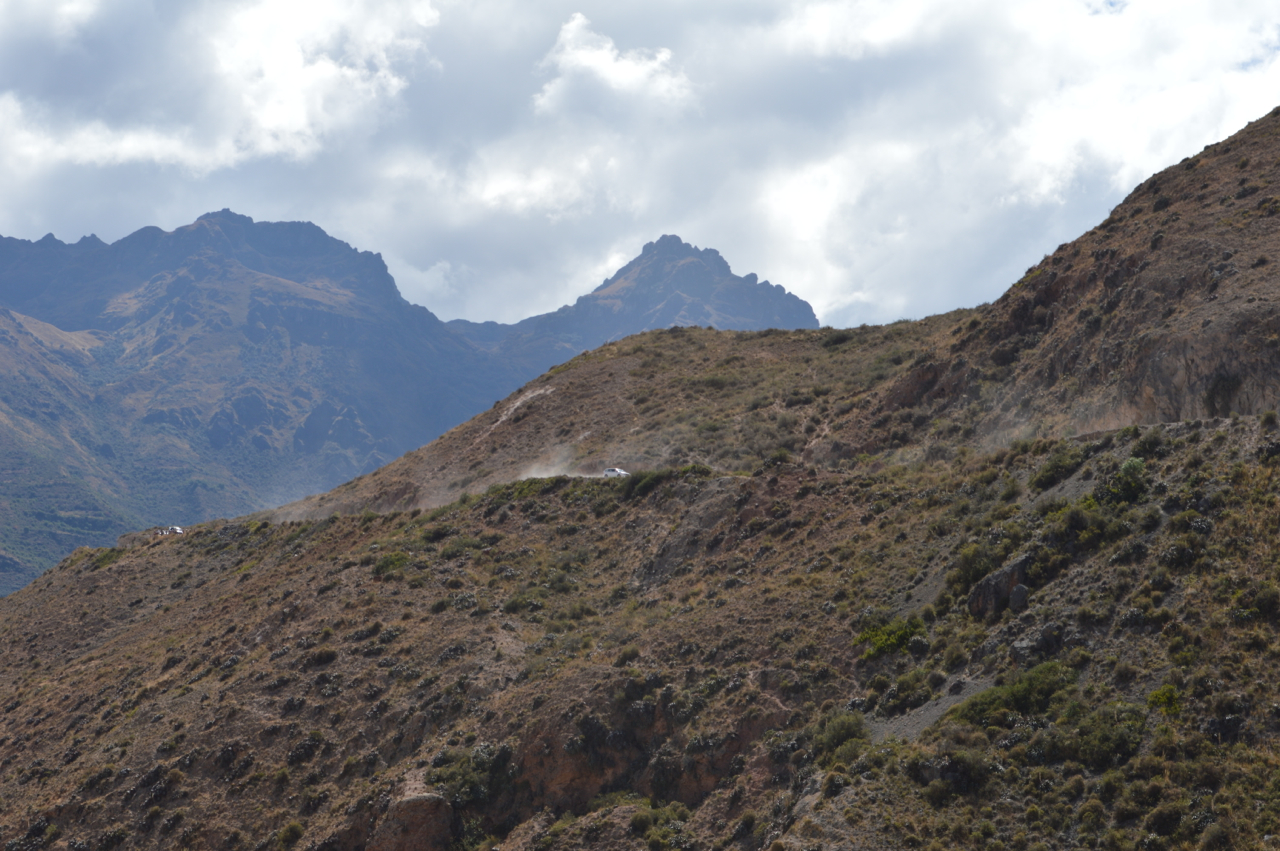 The salt in these mine come from water. From what I think our bus driver/guide said (he only spoke Spanish, so there may have been a translation issue), the salty water is a naturally occurring phenomenon. This picture shows where the small stream of water begins in the area. 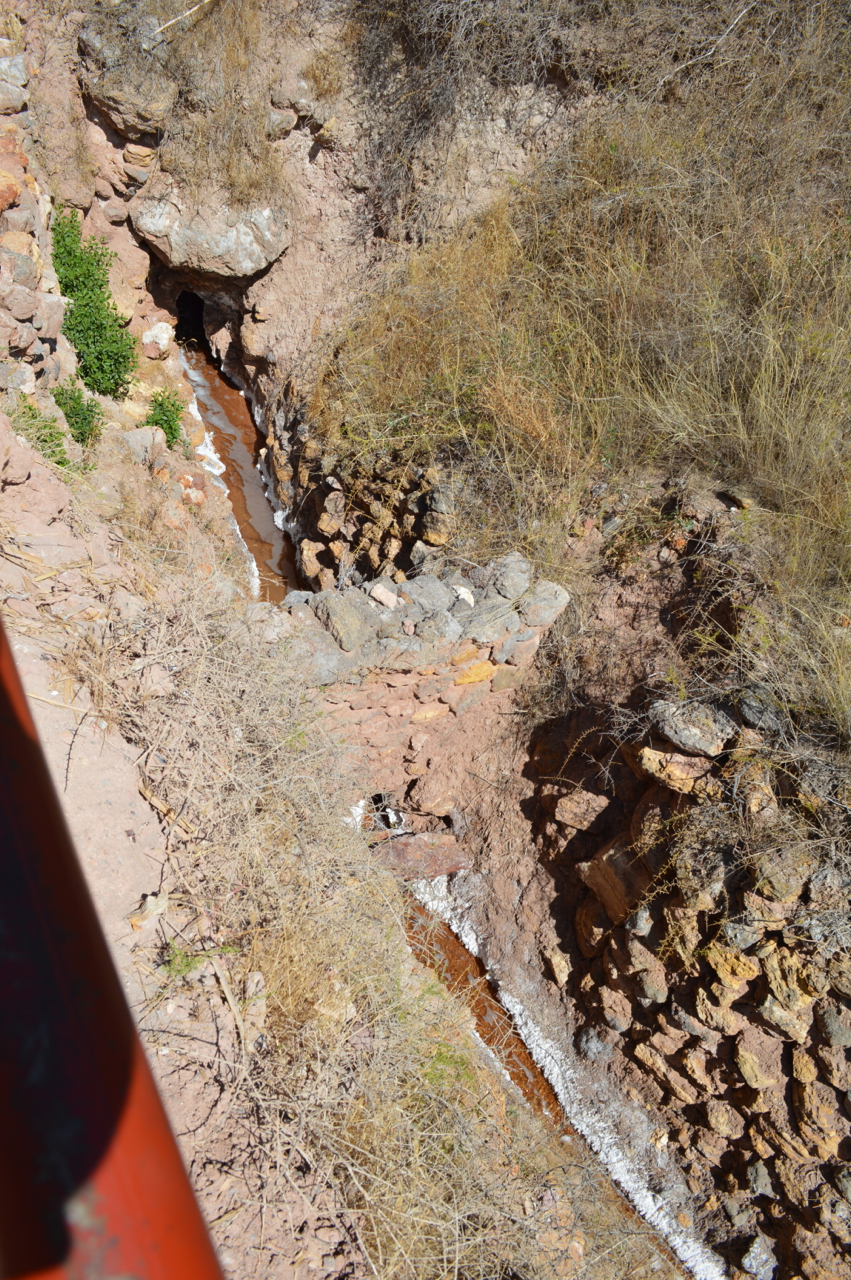 Here is the path of the small stream heading towards the salt mines. The stream goes between the alcoves of salt that are mines, and I assume that it is redirected into empty alcoves when it is needed. Our guide told us to stick our hand into the water to taste it. The water was surprisingly warm, and the salt content was similar to what you would try to achieve when gargling warm salt water for a sore throat. 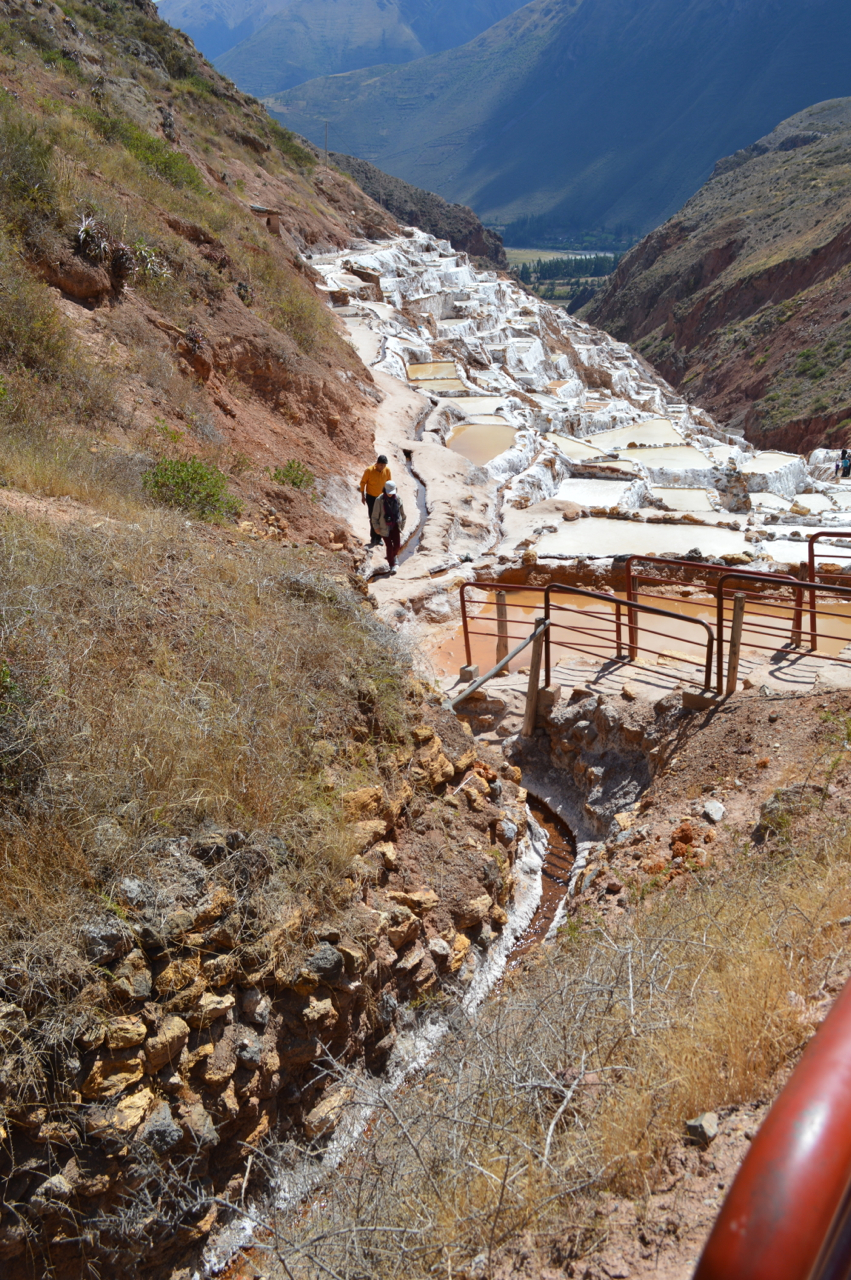 From what I could understand, the salt is left in the alcoves for 15-20 days to let the water evaporate. From there, I believe that there is just salt left over for the owner of the alcove to mine. Each little alcove has one person who owns the area to work.

From this picture, you can see that there are different colors of salt. Some of the salt is for people and some is for animals. In addition, the gift shops nearby sell white and pink salt. 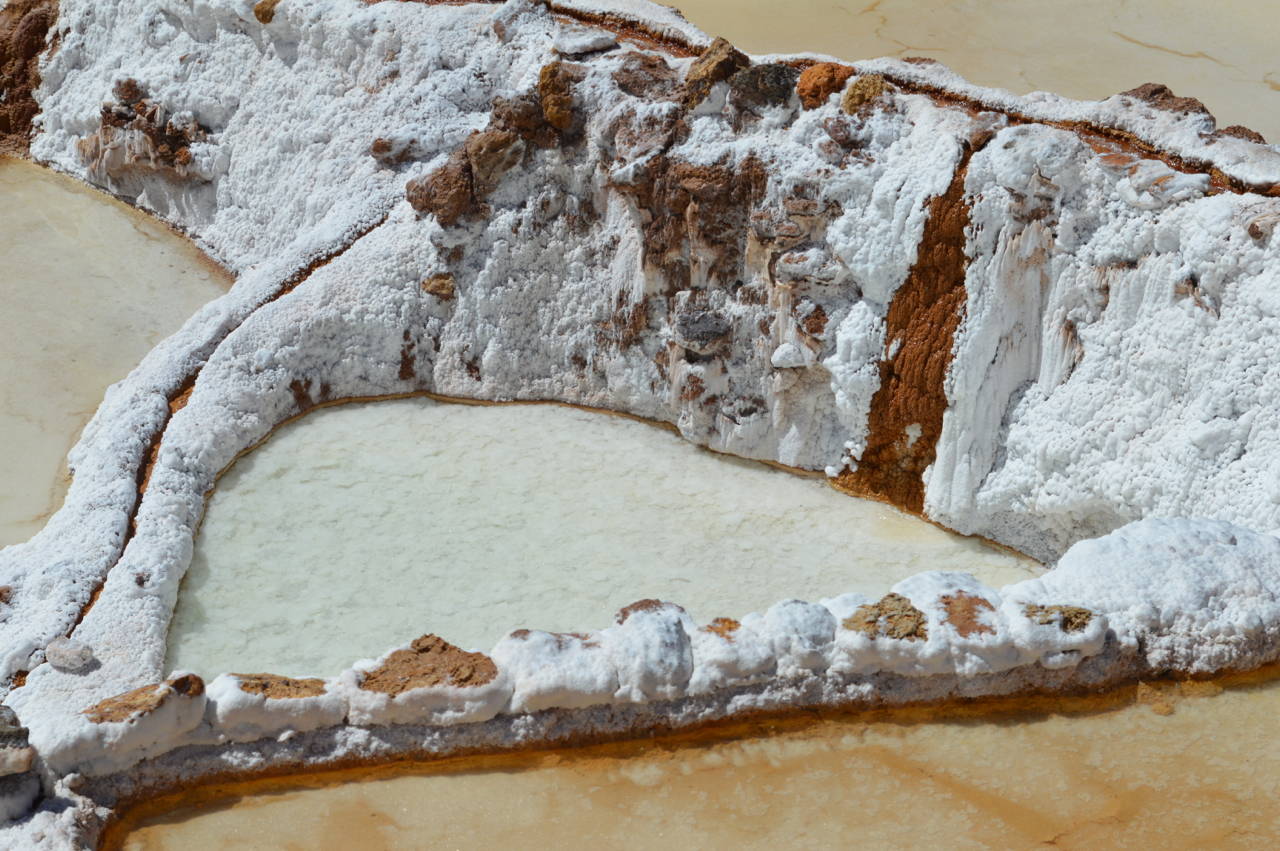 I found it interesting how the salt stuck to everything. Even the walls by the stream looked like they were coated in snow!

My group walked out along the narrow ledges on the top level of the area. We went almost to the end of the mine. It was a really fascinating experience to see how something so basic, like salt, is produced. Now I just need to find a pepper farm to complete my set!

Next, we drove to Moray. From what I could find online, people believe that Moray was an agricultural experiment. The different circular levels are all slightly different temperatures, which probably allowed the Incas to see how temperature affects crops. There were two different circles. One looked much newer and better maintained while the other one appeared to have been left alone. The better maintained one had some water damage recently, so people weren’t allowed to walk down into the center, but the older looking one didn’t have a restriction like that. 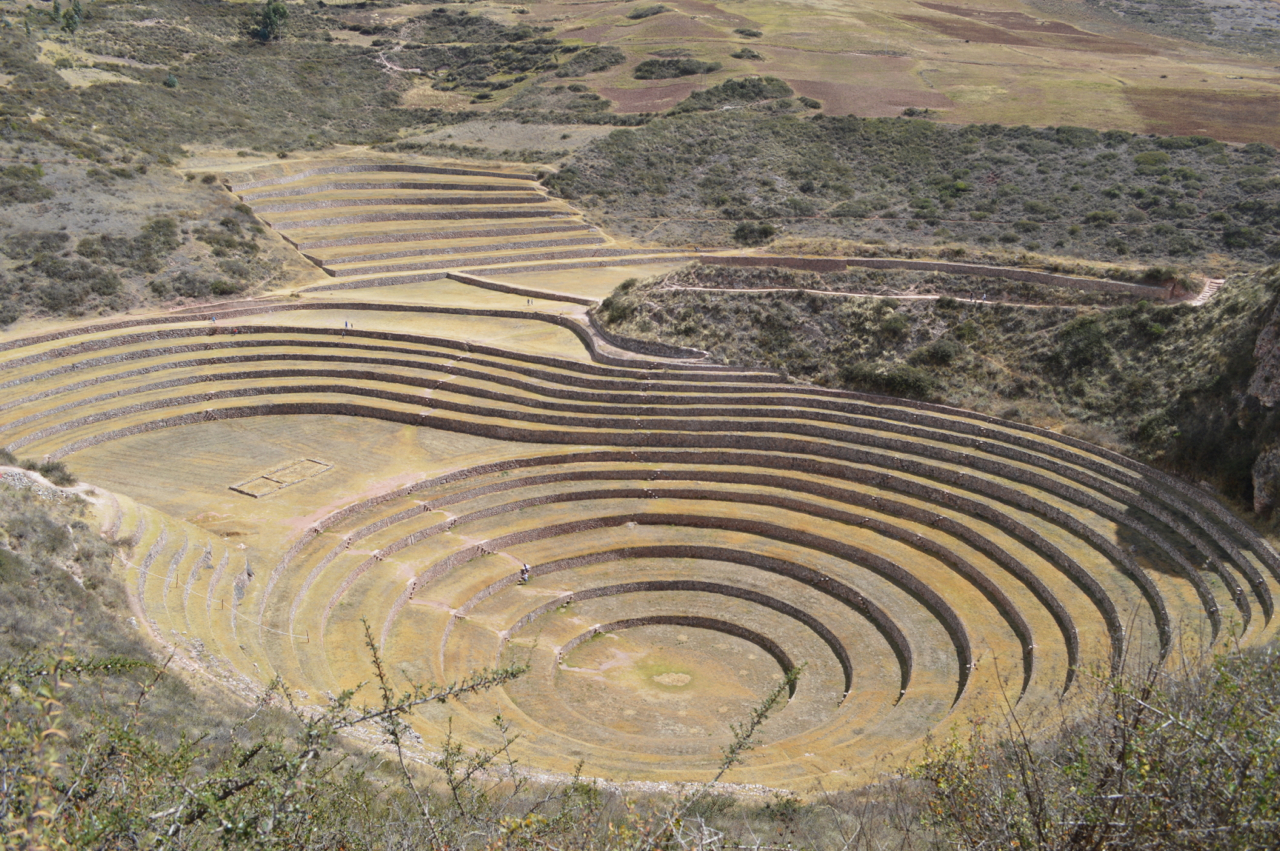 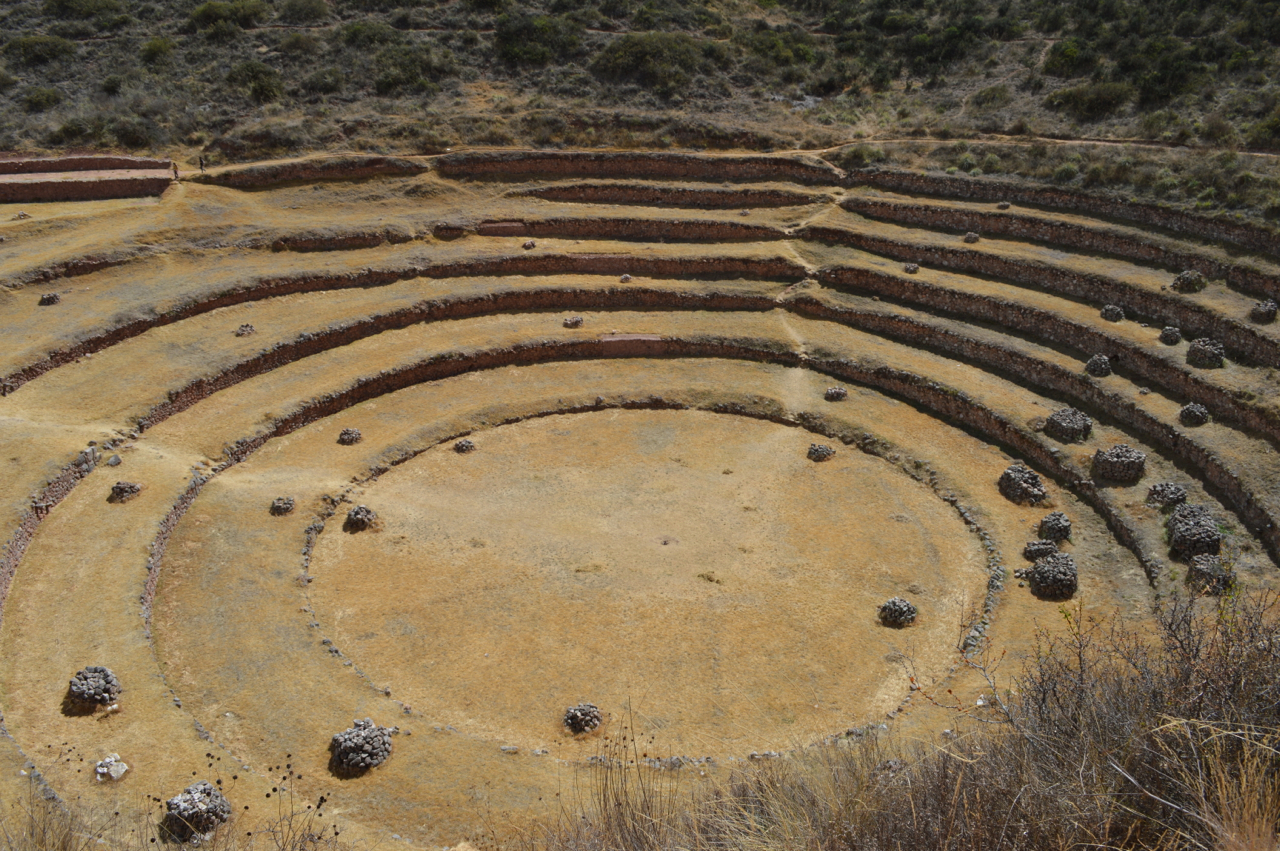 The rock ledges were huge! Here is a picture with some people for reference. To navigate the ledges, the Incas built their own unique version of stairs into the rock wall. The stairs consisted of three or four rocks that stuck out about a foot that you could climb. These appeared to be on all of the ledges in at least one spot. 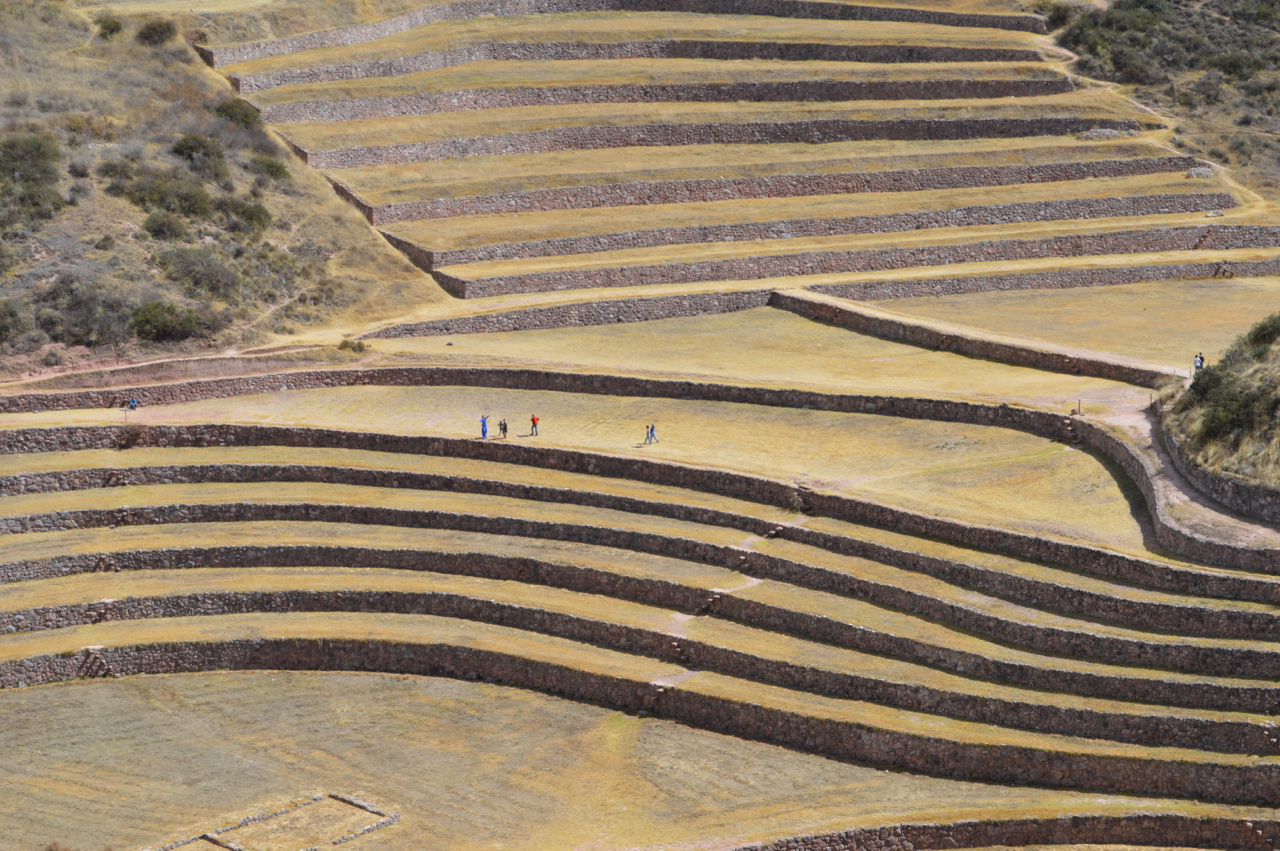 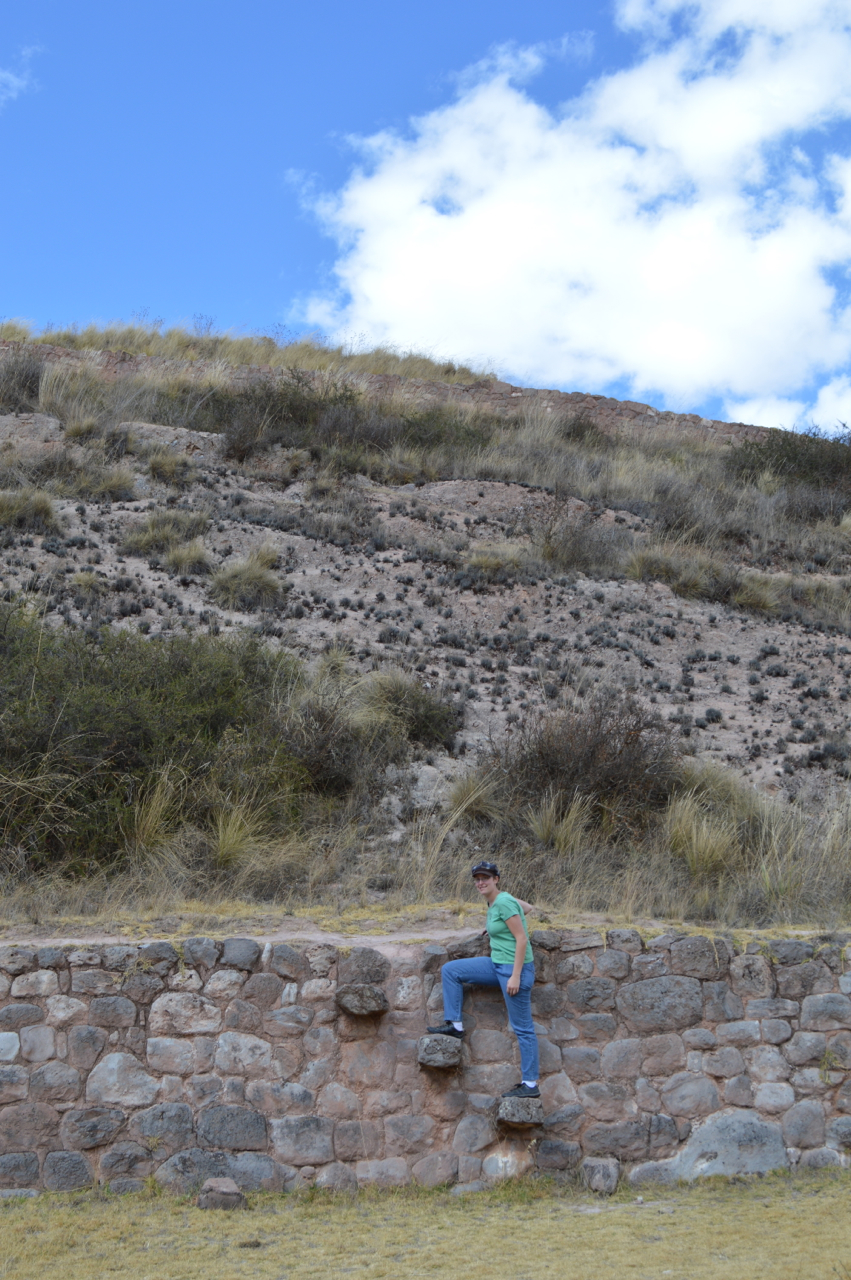 All over the place there were rock piles. I don’t really know their purpose, but there were a lot of big rock piles on the ledges of the older looking circle as well as a small one in the center. On the way back up, there were a bunch of small, almost decorative rock piles in a small clearing on the pathway. It was very interesting, and I wonder how they came to be and why they exist. 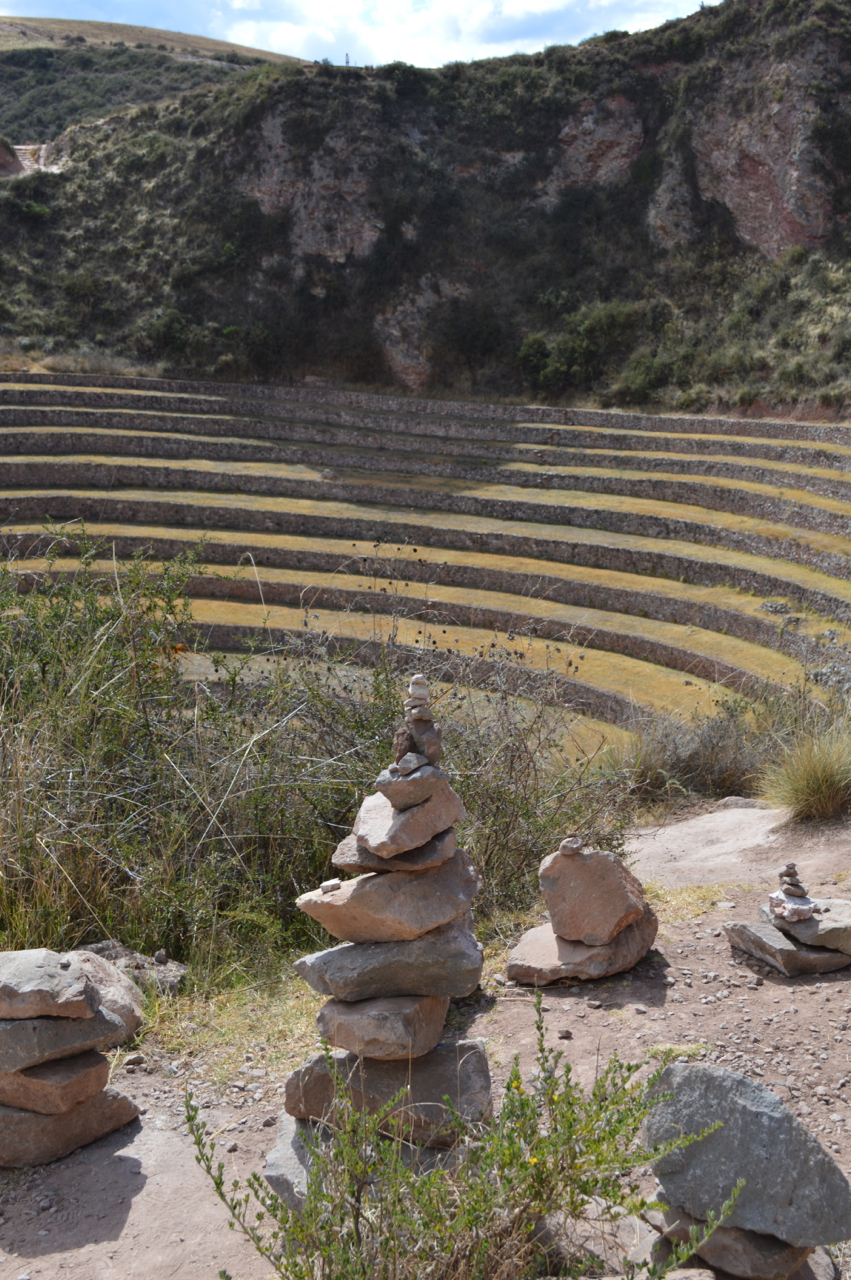 Overall, I really enjoyed this trip. I had been a little concerned about being able to keep up after the last trip I went on, but I had little to no problem with this larger group. It really was a beautiful day. It was nice and warm, and I didn’t even need a jacket! I hope that the trip to the Sacred Valley this weekend is as fun as this trip was!